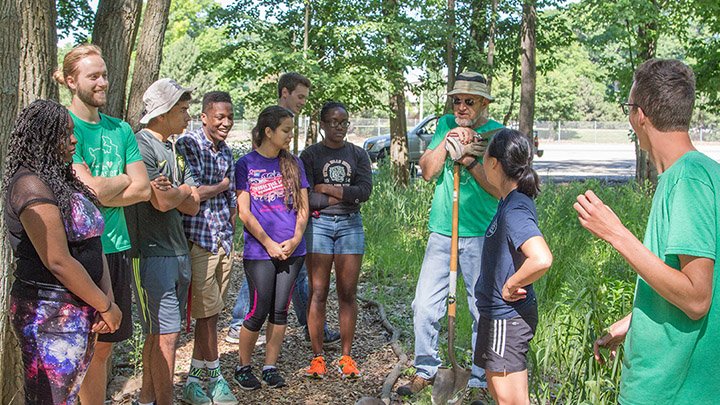 On July 6, 100 high school seniors and recent high school graduates will converge on Calvin’s campus from all over the country for the Entrada Scholars Program, united by their academic prowess and diverse backgrounds.

Entrada—one of several collegiate access programs offered by Calvin—is a month-long program focused on providing students from racial and ethnic minority backgrounds with an opportunity to develop academically, spiritually, and socially prior to college. The students take a three- or four-credit course, live on campus, and engage in a variety of community activities.

“I’m always excited for this program because of the energy that it brings to campus,” said Nygil Likely, director of college access programs; “the diversity of thought and perspectives that the students bring and that the staff bring is always encouraging.”

Over Likely’s five-year tenure, he has directed efforts shifting the program’s focus from college preparation to the expansion of well-prepared students’ access to scholarship and service. “Doing that has allowed the students who do come through the program to flourish,” said Likely, “[they] are graduating and retaining well here at Calvin.

“These students are very gifted,” he added. “They bring a lot of talent and academic preparedness to the college.”

This year, Entrada has continued to grow—the 2018 class is the largest yet—and develop. Aiming to involve scholars in more opportunities to serve and connect with the Grand Rapids community, two new service projects have been added. The program’s three total projects include working in a local community garden, helping with an intergenerational preschool program at a retirement home, and participating in a water distribution day in Flint.

Even as the program evolves, Likely noted, it still accomplishes its core aims: “Entrada continues to be a vehicle or a pathway for underrepresented populations to experience Calvin College and experience higher education.

“Entrada aligns with the mission of the college by wanting to have every nation represented here,” he added. “It aligns with our commitment as an institution to diversity.”

A community of scholars and servants

“Entrada helped me embrace my multi-ethnic background,” said Cami Young, a second-year student at Calvin who attended Entrada last summer. “I learned about many different cultures, and I met some of my closest friends.”

Dre Davidson, another second-year student and Entrada graduate, said, “I enjoyed the community aspect of Entrada the most.” He added, “Coming into my fall semester of freshman year, I didn’t feel alone because I had my friends from Entrada.”

According to second-year student and Entrada graduate Victoria Anaele, her favorite part of the program was attending as a junior in high school: “I didn’t know much about college or what college classes would be like, so having the opportunity to actually take a college class was helpful in putting my fantasized thoughts about college into reality.”

All three are in training to be resident assistants at Entrada 2018 and are thrilled to be involved with the program again.

“I am so excited, and I can’t wait to watch the students grow in their walk with God,” Young said. “I really hope that the scholars love Entrada as much as I did!”