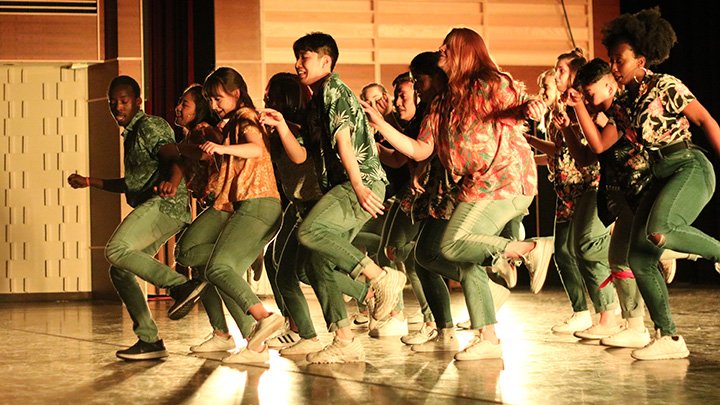 Dance Guild, one of the largest on-campus student organizations, turns 50 this year.

Dance Guild will be enjoying their two shows on November 19th and 20th, with the theme celebrating not only their 50th anniversary, but also their reputation as the longest-standing student organization.

“Our theme for this year surrounds our 50th anniversary,” says senior Blake Winslow, one of the five members of Dance Guild’s student leadership team. “[In the past] it became kind of hard for choreographers to have full creative range over what genre they wanted to do … So for a while we haven’t had yearly themes, but we are bringing one back this year for the 50th anniversary.”

Commitment to Diversity and Inclusion

Members of Dance Guild leadership all agreed that the student organization’s purpose and concept is to make dance accessible to all—anyone can dance, with or without experience.

Dance Guild’s commitment to including any and all who want to participate has been a staple of their community culture since its establishment. More recently, great diversity of thought and expression has brightened the stage for Dance Guild. In particular, groups like the Ready for Life Program help cultivate a welcoming environment.

“I have five Ready for Life students in my guild funk piece and they’re all right up at the front and know exactly what they’re doing,” says senior Anneke Avery, another member of Dance Guild student leadership. “They’re always encouraging everyone else when they come to rehearsal each week...it’s really fun to have them fully incorporated into Dance Guild.”

A Reputation Worth Maintaining

Throughout the history of Dance Guild, members have welcomed new students with open arms by participating in traditions that create community.

One such tradition includes singing a doxology before a show. “I wasn’t used to it at first,” recalls Winslow, “but now I’m like ‘okay, this is how we start a dance show.’” In addition to loosening members up before performing, Winslow says the doxology provides humility: “we are able to dance because God gave us that ability.”

“My involvement with Dance Guild began when I was an undergraduate student,” reminisces Cassandra Vander Well-Pegman. Now as the program’s advisor, Dr. Vander Well-Pegman expresses her desire to maintain Dance Guild’s tradition and to help continue its evolution: “each semester, new students are involved, each with a unique set of abilities, vision, and performance quality... my hope for the future of Dance Guild is for it to continue to carry out its powerful vision and mission. I hope that all students, regardless of their background, find a place to celebrate the gift of dance at Calvin.”

Mixing the Old with the New

While dance styles do remain with each season of Dance Guild, the variety of genres makes choreographing and participating a thrilling experience. With an Afrobeats style appearing one year and Dance Guild’s first-ever disco dance making its debut this season, there’s always something new cultivating excitement among guild members.

It isn’t only the music genres that change, however. Dance Guild’s membership includes students from all years and experience; seasoned dancers encourage first timers, and fifth-year seniors get to share the stage with freshmen.

Sophomore Grace Wan expresses her desire to remain a part of the Dance Guild community: “We’re all growing really close...I really hope we can continue to build those personal connections with other awesome dancers.”

For the past year, Dance Guild leadership overcame many challenges that arose with COVID, including not being able to host live shows last year, and a drop off in new membership.

“We really didn’t know what to expect after COVID...we obviously didn’t want to lose Dance Guild because it’s such a big part of our lives and so many other students’ lives,” says Winslow.

In addition to COVID, another burden to Dance Guild’s success was the recent elimination of the dance minor. “The dance minor served as a bedrock for Dance Guild in providing a deeper understanding of the rich significance of art and the meaning and cultures of dance,” explains Dr. Vander Well-Pegman. “[It] played a pivotal role in developing strong and informed leaders that historically served on the Dance Guild leadership team.”

Though Dance Guild has faced these difficulties, the popularity and reputation of shows have not diminished; this year, Dance Guild hopes to again be sold-out on both fall shows even with COVID still present.

When asked about their hopes for the future of Dance Guild, many answers reflected a desire to simply continue the legacy of the organization. In particular, members expressed wanting to see more people dance, more shows, more variety, and more creativity.

“I don’t know what the last 50 years looked like exactly, but I want to see this creativity continue,” says Avery. “Hopefully I can come to a show in 20 years and be like, ‘oh, we would never have been able to pull something off like that when we did this.’”

It may have 50 years of history under its belt, but Dance Guild still has many plans for the future!