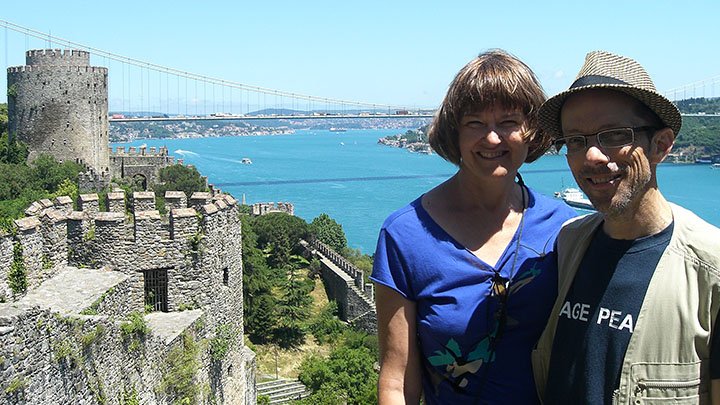 Doug and Sandy Howard in 2012 at Rumeli Hisari in Istanbul

“Studying ancient people helps us understand the diversity of culture in our own world, but on the other hand, it helps us realize people are just people,” said Douglas Howard, professor of history.

As an Air Force kid, Howard never stayed in one place for long. Before graduating high school, he had lived in Turkey two different times, once in elementary school and once in high school. Throughout his life, Howard said he has always been fascinated by Turkish and Ottoman culture.

After finishing his doctoral dissertation years ago, Howard remembers telling a friend he would write a history of the Ottoman Empire one day. “I went to school for history, but really, all I ever wanted to do was go back to Turkey,” said Howard.

After a visit to Turkey in 2006, Howard said he was again intrigued by the idea of writing a history of the Ottoman Empire.  “On this trip, I saw things I hadn’t realized before,” he said. A few months later, Howard was approached by an editor at Cambridge University Press with a proposal to write a text on the Ottoman Empire.

At this same time, Howard’s wife, Sandy, was beginning a two-year process of breast cancer treatments. Howard said he began a substantial portion of the book much like any other history text; however, his wife’s battle challenged the way he approached his writing. “I started the book as a straightforward political, economical and cultural history of the Ottoman empire, but there was this whole other thing happening in our life,” said Howard.

Howard scratched what he had already written and took a new approach to the book. A History of the Ottoman Empire takes a look at the worldviews of the Ottoman people. He said this idea stemmed from his own life experiences.

“Key ingredients in a person’s worldview are not things we would choose,” said Howard. “Under the surface, it’s a book about disease, disaster, grief, loss and how people cope with pain. That’s worldview.” Using the metaphor of ruins, Howard explores how the common Ottoman people dealt with destruction and loss in their everyday lives.

In his writing and research, Howard utilizes Ottoman poetry and outlines Ottoman culture through their religions. Howard said that unlike some other Ottoman histories, he writes a great deal on Christians, Jews and interfaith relations across the Ottoman Empire.

Howard explained that his text is also unique in its organization. While many histories focus on specific events, Howard’s is organized by centuries, according to the Islamic calendar. “A good way to get into a society’s worldview is to understand their view of time,” said Howard. In this way, Howard said, specific events are not elevated above others. “What is in the background is as important as what is in the foreground,” he said. “The mundane stories are as important as the revolutions.”

Writing A History of the Ottoman Empire took Howard to eight different countries over the course of nearly 10 years.

“Howard’s book is the culmination of years of intensive research and writing. Experts in the field are praising the book not only for its clear and engaging narrative history, but also for the insights he brings in terms of spiritual and cultural developments. In this way, he really breathes life into a sometimes overwhelming history,” said Kristin Du Mez, chair of Calvin’s history department. “It’s an incredible scholarly accomplishment and an altogether beautiful book. It is a privilege for us in the department—faculty and students alike—to learn from an expert of Howard’s caliber.”

Howard hopes his book will play a role in both graduate and undergraduate classrooms and be an intriguing read for anyone interested in history or the Ottoman Empire. Du Mez believes A History of the Ottoman Empire will be used at universities across the country, and beyond.