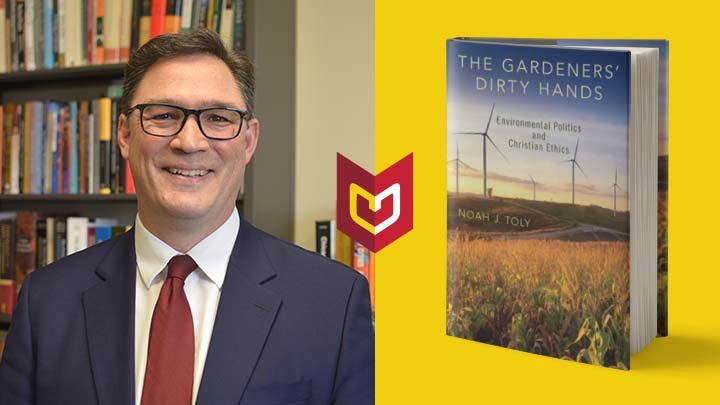 “The Aldersgate Prize is one that I’ve followed with interest every year since its inception, not because I thought any of my books would ever be nominated, but because of the ideals it seeks to honor,” said Toly.

Since 2013, the John Wesley Honors College at Indiana Wesleyan University has annually awarded the Aldersgate Prize. The prize celebrates the outstanding achievement of an author whose scholarship challenges reductionistic trends in academia by yielding a broadly integrative analysis of life’s complexities and by shedding fresh light on ultimate questions that can enrich Christian conceptions of human flourishing.

“I can hardly imagine a more apt description of my aims in Christian scholarship,” said Toly. “The books honored by the prize over its first eight years have been excellent contributions written by distinguished scholars and published by outstanding presses. I’ve learned a lot from them, but I never expected one of my books to be among them, so I’m deeply honored by the selection committee’s choice.”

And the committee had a fair amount of work to choose from having reviewed more than 70 nominations before deciding on Toly’s book.

“So much of modern environmental thought and global environmental governance is preoccupied with the need to give up, undermine, destroy, or forego one or more goods in order to possess or secure one or more other goods. Want clean water, clean air, and a biodiverse, climate stable future? I do. But here’s the key: Along the way, we’ll have to give up some other non-trivial goods in order to get there,” said Toly as he reflected on his latest book.

“Our usual responses to this reality are terribly dysfunctional. We might deny that these tradeoffs exist. We might be paralyzed by them, unwilling to choose a course of action that involves giving up one good or another. We might throw up our hands and say, ‘If I’m giving up or destroying something good one way or another, then nothing matters’ or ‘If all of my options involve giving up something good, then how can I even know right from wrong.’ But the Christian tradition gives us better options than those.”

So Toly wrestles with all of these realities in his book, drawing on theological ethics to both name this challenge and also develop a Christian response to it.

Toly, who now serves as provost for Calvin University, is also a scholar of urban studies, politics, and international relations. He is a non-resident senior fellow for Global Cities at the Chicago Council on Global Affairs and has taught on cities and urbanism in the Free University of Berlin’s Center for Global Politics. He has served as senior fellow at the University of Chicago’s Martin Marty Center for the Public Understanding of Religion and as associate fellow at the University of Virginia’s Institute for Advanced Studies in Culture. Toly also serves on the Advisory Council of Together Chicago, as well as the steering committee of the Duke Divinity School Traditioned Innovation Initiative.

Toly will accept the Aldersgate Prize on October 20, 2021, when he’s on the campus of Indiana Wesleyan University to deliver an address about his book as part of the President’s Author Series.