Calvin students debate whether free speech is worth the cost 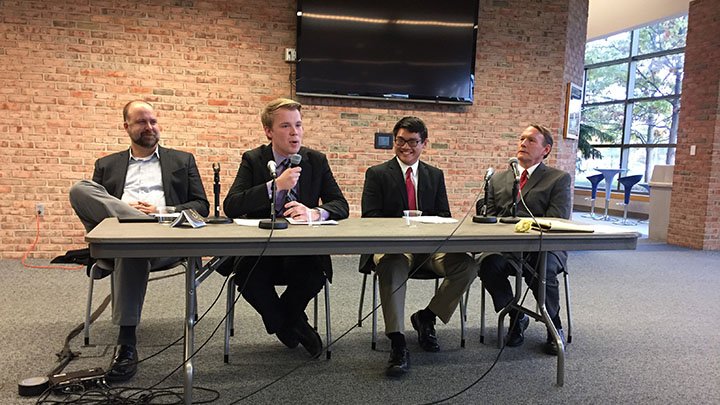 Micah Watson, Jesse Brink, Nick Kuyers and Doug Koopman participate in "The Constitution and Free Speech: Is It Worth the Cost?"

“I believe promoting civil discourse and conversations around politics is a special calling for Christian higher education, and particularly those that operate from the Reformed perspective, like Calvin,” said Doug Koopman, professor of political science. “Social and political structures are both part of God’s good intent for the world, but fallen like the rest of creation. Reformed Christians have a special obligation to seek the renewal and rebuilding of politics and government, and so both faculty with expertise and students with interest ought to respond to this calling.”

In early November, Calvin’s political science department put on a debate surrounding free speech in conjunction with the Henry Institute, Pre-Law Program, the College Democrats and the College Republicans. The debate, “The Constitution and Free Speech: Is It Worth the Cost?,” was the third and final event in the department’s Constitution debate series. The Constitution series was initiated to promote an increase in the general knowledge of political issues among the student body, encourage informed and civil discourse and consider topics from the perspectives of both the left and the right.

The Constitution Series was implemented for the first time this year, however, similar debate series have been initiated in the past. The U.S. Department of Education requires each educational institution that receives federal funds to hold an educational program every year about the U.S. Constitution for its students, said Koopman. “Last year the department led a series of events on challenges facing the new U.S. president,” he said. “That went well, and both faculty and students wanted to do something similar this year.”

Grappling with issue of free speech

The debate featured professors Micah Watson and Doug Koopman from the Political Science Department, as well as representatives from the College Democrats, Jesse Brink, and College Republicans, Nick Kuyers. Unlike the student representatives, neither faculty member knew before the event which side of the issue they would be debating. A random drawing determined Koopman would debate from the Republican side along with Kuyers and Watson would be debating from the Democrat side along with Brink. Throughout the debate, Jennifer Holberg, English professor, acted as moderator.

The debate was a good example of civil discourse in action, said Koopman. “This particular debate, about how ‘free’ First Amendment free speech should be, was very good,” he said. “There was good disagreement, without people being disagreeable, and most of the key issues, like what is harm, protected speech, allowable action and the like were raised.”

“If students are like me, politics is often frustrating and confusing.  We know it is important, but often it does not seem to accomplish much,” said Koopman. “I think today politics do accomplish some things, but they can do more, and do better. That starts with engaging, with civility, those who disagree on both substantive issues and strategic issues.  Events like this help do just that.”