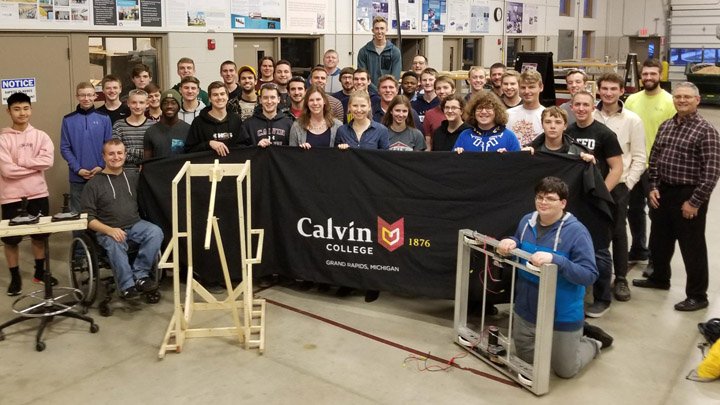 Calvin College and South Christian students collaborated on a robot for the FIRST Robotics competition.

“In a high-pressure environment, everyone solves problems a different way,” said Ren Tubergen, Calvin engineering professor. “Learning to resolve those differences in a group is a very valuable people skill. This kind of project shows students the value of listening and brainstorming.”

This interim, Tubergen invited students from Grand Rapids South Christian High School to join his Mechatronics class in which students were provided a task for a robot to perform, and then had three weeks to design and build a robot that could accomplish the task. The team of Calvin and South Christian students will compete against others with their robot March 21 in the FIRST Robotics competition.

“Throughout my career, I have liked to choose activities where I can share my passions with others. That is why I got into teaching in the first place,” said Tubergen. “I want to help others design, build, and develop their skills.” He has been on the board for the regional division of FIRST Robotics competition since 2010. “Peter Snyder (Calvin business professor) and I hoped an opportunity like FIRST Robotics would allow senior mechanical engineering students to use their gifts to serve in the community and learn new skills alongside South Christian students.

The Mechatronics course was made up of about 25 mechanical engineering students and around 20 high school students. Students kicked off the class learning the general rules of FIRST Robotics and later broke into sub teams— drive, pneumatics, electronics, and CAD—each contributing to one aspect of the design and building process. The next two weeks were spent building the robot together as a class in Calvin’s engineering building.

The basic goal of the competition each year is to move an object or collect a group of objects, explained Derek VerMerris, a Calvin engineering student. “This year, the game is kind of like capture the flag, except instead of a flag, there is a scale you need to tip. The longer a scale is tipped in your favor, the more points you get,” he said. In addition, there is always a secondary object of the game in which robots will have to perform an additional task. “This year our robot has to be able to climb a pole to finish.”

“One of the things that FIRST encourages is something called ‘coopitition,’ a combination of cooperation and competition,” said Keiser. “That theme is encouraged throughout the whole process. Even if one team is struggling at competition, other teams are encouraged to come help them work through it.”

At the competition, teams work together on one of two alliances: red or blue. “When you show up at a competition, it is not your school against theirs,” said Tubergen. “Teams will all work together at one point. Everyone tries to help everyone else be successful.”

Equipping the next generation

“I participated in FIRST Robotics throughout high school, so this opportunity really appealed to me,” said VerMerris. “I also wanted to make a difference in the life of the high school students that we would be working with.” The college students enrolled In the Mechatronics interim class played more of a mentoring role throughout the process. “We loved to hear the ideas of the high school students; a lot of times they have better ideas than experienced engineering students.”

“We had dinner with the high school students several times throughout the course. That was nice because we got to hear about their interests outside of robotics and find out why they were participating,” said Keiser. He did not participate in FIRST Robotics while in high school, but said this would be an amazing experience for any high school student interested in going in to engineering, math, physics, or similar fields.

“It was great working with the South Christian students and teachers. They were all new to FIRST Robotics, as well as most of our class, so it was fun to learn along side them,” said Darbi Meyer, a Calvin engineering senior. “If I had been involved with FIRST Robotics in high school, I may have been interested in engineering sooner. It's a great way to get hands on experience with designing and manufacturing in a fun and competitive setting.”

“With this program, we are hoping to get more students at South Christian interested in the science and technology fields, whether that be here or at another school” said Tubergen.