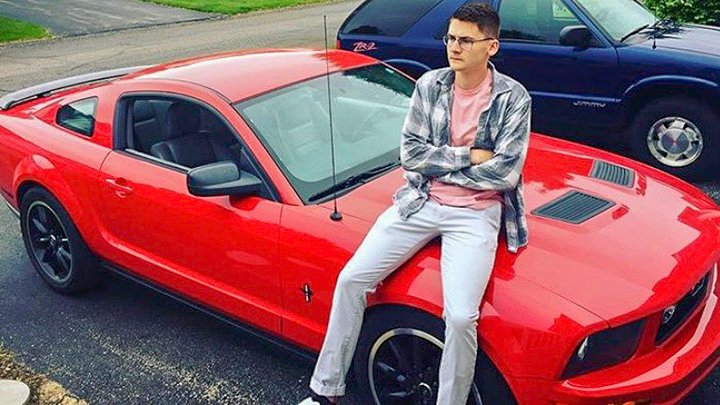 “He was one of the most likeable kids I’ve been around … I just really, really enjoyed him.”

It didn’t take Dirk Pruis, a business professor at Calvin University, long to discover that Max Renauldo, a finance major at Calvin, stood out among his peers. Pruis had Renauldo in two classes during the 2018-2019 year and was his academic adviser.

“He had such a good heart. He cared about people and you could just see that in the way he interacted with other students in and around class,” said Pruis.

Renauldo, a week away from beginning his senior year at Calvin, died in a motorcycle accident on Friday, August 23, 2019.

“He was very intelligent and he loved reading. I bought him The Divine Comedy for Christmas and he ended up buying a bigger version of it because he said it didn’t have enough depth,” said Zach jokingly.

Zach, a junior at Calvin, was just 16 months younger than Max. He remembers his brother as a man devoted to God, to his family, and to his country.

“Catholic church really spoke to Max,” said Zach. He was baptized in 2019 on Easter Sunday, attended Latin mass for two hours each Sunday, and Zach estimates his brother bought “about 170 rosaries from 2017 to the day he died.”

“He was a devout traditional Roman Catholic, went to mass about three times a week, so God was a big part of his life,” said Zach. “He was always reading about Christian theology and everything like that. He was just a very morally virtuous person and he loved family and he loved friends and every single person in his life. He made sure to embrace them and to make sure that they knew he loved them.”

One of the ways he showed that love was through service, including to his country. Max was in the ROTC program while at Calvin, a passion he grew to love more than hockey, which was a favorite activity he and his brother participated in growing up.

“He was in his element doing military stuff,” said Zach. “There’s this one story that he told us when he left Fort Knox at advanced camp. There was some military leadership training going on and one guy started to break down when he didn’t know what to do. The unit commander said something under his breath, something like ‘I guess nobody’s leading this.’ And Max grabbed his machine gun and got up and led all the people and he laid down suppressive fire—it was a simulation, you know—and he took charge of the whole situation and for the rest of the time at base camp they called him Rambo because he took charge.”

He was a grinder. He was a servant leader. He was someone who encouraged others to keep going.

“I think he knew life wasn’t going to be easy, he was going to have to work for it, and he was not afraid of that,” said Pruis. “And he was very much a glass half-full kind of a person, always happy, of course had stress like anyone else, but saw things positively.

“He sought the good in everything,” said Zach. “The day before he died he was talking to one of his best friends, my best friend from high school, we all moved in together, his name is Jacob.  And Jacob said to Max, ‘life sucks sometimes, you know?,’ because with school starting he was very anxious, and Max said, ‘yeah, yeah it does, but you know you’ll get through it and it gets better and it gets easier every day.’ It was one of the last things he ever said to my roommate Jacob.”

And it’s just one of the many life lessons he left for his professors, classmates, fellow cadets, and his family.

“He always will stick out to me because of his style and the way he went about life,” said Pruis. “Looking back now, oh my, I wish I had another year with him.”

A mass of Christian burial will be held at 11 a.m. on Friday, August 30 at Sacred Heart of Jesus Catholic Parish (156 Valley Ave. SW, Grand Rapids, Michigan). Relatives and friends may meet the family from 9:30 to 11 a.m. prior to the service at the church. See full obituary.

Calvin staff are working with Max’s family to understand their wishes for an on-campus service sometime after students begin classes next week. More details to come.

A pair of Calvin alums and students have started a GoFundMe campaign in honor of Max. The money raised will be given to the WMU ROTC Grand Rapids Program, which will benefit students in the ROTC program at Calvin and other area schools.

“Max Renauldo was one of our cadets attending one of our affiliate schools, Calvin University. He was a bright young man and was going to graduate and commission as a Second Lieutenant in the Spring of 2020. He recently completed Cadet Summer Training on July 29. This is a major accomplishment as most people are unable or unwilling to complete this training. He always had a smile on his face and always took time to assist and provide mentorship to other cadets. He was selected to be the Administrative Officer in Charge for Charlie Company this semester due to his proactive nature and attention to detail. The Bronco Battalion will miss his jovial attitude and never ending willingness to steward the profession of arms. He will always be remembered.”

“Max was a good upstanding young man! He played in our program for one season and then decided to concentrate on his ROTC program. One of Max’s favorite things to say was ‘I like to help.’ In addition to his kind spirit he was a fiercely competitive athlete who strived to be the very best, while being a tremendously supportive teammate. He will be missed by many of our current hockey players.”