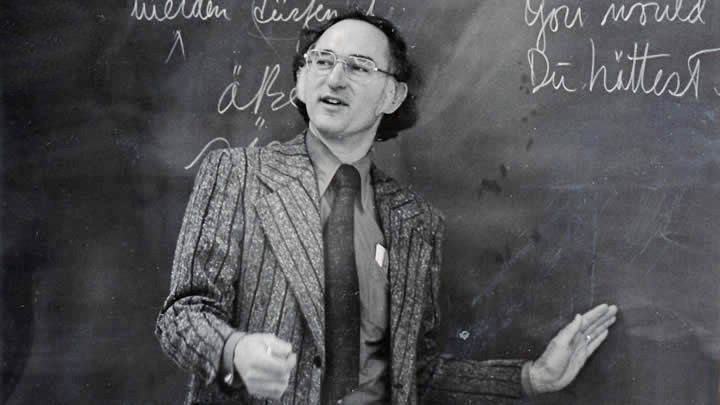 Helping students learn was always at the center of Jim Lamse’s teaching. “We will stand on our heads to help students understand,” said Lamse, upon his retirement from Calvin in 2000. During his 31 years in the German department, Lamse was known to use various props—stuffed animals, a rubber chicken—to aid in that effort.

“Jim was such a passionate teacher, and he could be equally passionate about the inflection of a noun or the proper pronunciation of a German umlaut as he was about the mysteries of German Romanticism,” said former student and colleague, Herm De Vries.

“He was that rare combination of both profoundly passionate about the subject matter and deeply caring about his students and their learning,” added former student Corey Roberts, who now serves as the chair of Germanic and Asian Languages at Calvin.

His efforts in the work exchange program were recognized with the Outstanding Service Award, presented by the Calvin Alumni Association, in 2004. For more than two decades, and well past his retirement, Lamse spent countless hours arranging paperwork, housing, transportation and work experience for hundreds of students, both Calvin students in Germany and German students in the U.S.

At the time of the award, Lamse said, “Students develop a lot of character by living and working in another culture. I know if they walk away thinking, ‘If I can do this, I can do anything.’”

Empowering students was always at the forefront for Lamse, said long-time colleague Wally Bratt. “He would go to incredible lengths to help students in whatever they were doing,” he said. “He had tremendous faith in students.”

Roberts was one of those students so influenced by Lamse. “While I know Jim found a real joy in facilitating these immersions into German language and culture, the experiences he arranged for me were also very influential in my decision to become a German professor myself, for which I am very grateful,” he said.

He will be remembered by his family, colleagues and friends for his selflessness, his wit and his impeccable German.

“He was a great colleague because he could listen to you,” said De Vries. “I’m thankful for many conversations. Jim would lock onto you with his eyes, patiently listen, think and then offer a gentle reply. We laughed a lot, too.”

“Together with my colleagues and many former students we will miss dearly his humor, his indestructible optimism, his contagious enthusiasm for German literature, his untiring and always creative helpfulness, and his loving, generous and affirming spirit nourished by a deep faith,” added Barbara Carvill, German professor emerita.

Jim is survived by his wife Mary Jane, his daughter Elizabeth, and his sons, Paul (Laura) and David.

A memorial service will be held on Saturday, Nov. 15, at noon at Shawnee Park Christian Reformed Church in Grand Rapids. Jim’s family will greet friends and relatives one hour prior to the service.

The James Lamse Memorial German Student Travel Fund has been established in Jim’s honor. Those wishing to make a memorial contribution should contact the Calvin College development office. 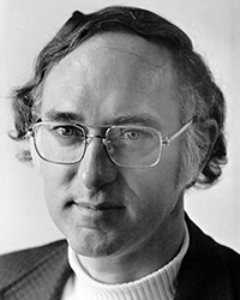