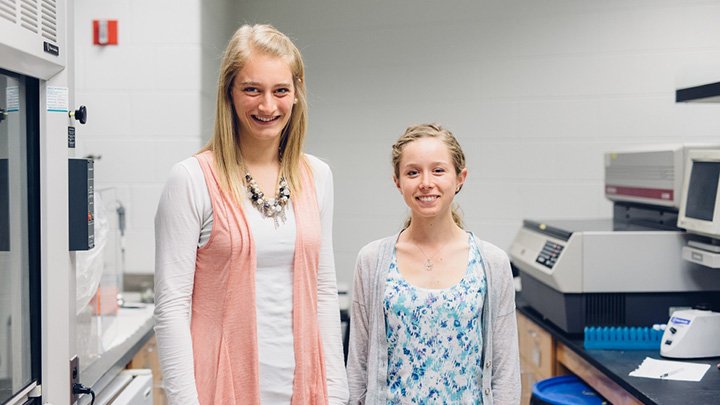 Two Calvin College juniors have won the Goldwater Scholarship, which is considered by most to be the highest national award for undergraduates in the sciences. Only 252 Goldwater Scholarships were awarded from a nationwide pool of 1,150 mathematics, science and engineering nominees.

“To consistently have our students selected for this award speaks volumes, not only to the excellent students that we get to work with here at Calvin, but also to the amazing research that these students get to participate in,” said Carolyn Anderson, a chemistry professor at Calvin who also serves as the college’s liaison to the Goldwater Foundation. “These awards go to deserving students, but they also highlight the excellence of our programs.”

In pursuit of knowledge

“I’m not content unless I’m learning,” Michmerhuizen says. “And, I know it sounds cliché, but I want to make the world a better place. The combination of those two things has lead me to pursue research.”

The process of applying for the Goldwater scholarship really solidified Michmerhuizen’s desire to attend graduate school. “I still haven’t decided what I want to study in grad school--maybe biochemistry--but I know I want to participate in research that has an application. I want to see the effects of what I’m doing and how it is influencing daily life for people.”

Fellow Goldwater recipient Lauren Strohbehn spent last summer researching in the lab with biochemistry professor Larry Louters. In their research, they are trying to determine the role that lipid rafts play in the efficiency of an important glucose transport protein called GluT1 in the cell membrane.

To do this, they use a centrifuge to separate different parts of the cell membrane based on density. Lipid rafts are less dense than other membrane fragments. Then, they use antibodies attached to a fluorescent compound to determine how much GluT1 is in the lipid rafts. “My favorite part is analyzing the fluorescent data,” said Strohbehn, a junior biology major. “It’s really beautiful to see, and it's always exciting to learn the outcome of a long experiment.”

She’ll continue that research this summer. “Prof Louters listens to me when I have suggestions, but I can be somewhat independent,” Strohbehn said. “Research in the lab is good preparation for grad school ahead.”

Louters also helped Strohbehn with the application process for the Goldwater scholarship. “When I found out I got it, I was thrilled and surprised,” she said. “It was an unexpected honor and makes me excited about my research this summer and upcoming graduate school. It’s nice to have some affirmation that I’m heading in the right direction and using my resources here well.”

Calvin College has now successfully nominated 18 Goldwater Scholars since 2008. Pomona College in California is the only other primarily undergraduate institution to have as many Goldwaters during that span of time.

Recent scholars at Calvin have gone on to grad school at MIT, UC-Berkeley, USC and the University of Michigan, to name a few. Anderson also notes that a number of recent scholars are now funded at the graduate level by National Science Foundation fellowships.