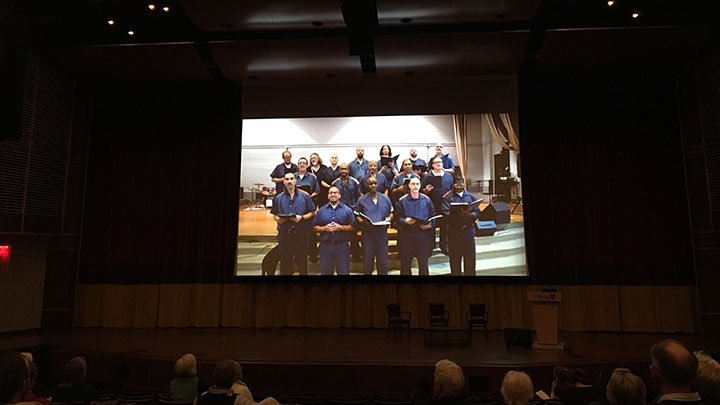 North America holds about 5% of the world’s population and 25% of its incarcerated population. Its prison population has increased 800% in the past 40 years. And Michigan prisoners will typically serve 120% of their minimum sentence.

Those stats call for action. And a population of students in the Calvin Prison Initiative (CPI) program are helping facilitate some important conversations related to these statistics from behind bars.

“Inner transformation is key to radical reconciliation, and ultimately restorative justice. We hope that as more people come to see the humanity and values of these forgotten men and women, the willingness to discard people will end.”

Jamie Sturdevant, a student at Calvin’s Handlon Prison campus, spoke this collective hope on behalf of the CPI students who organized and led the second annual West Michigan Restorative Justice Conference. The theme of the October 13 conference was “Hope, Healing, and Radical Reconciliation.”

Leading from inside the fences

CPI student Shawn England described how restorative justice is focused on relationship-building, not punishment. “Reconciliation requires more than leaving places of power for periodic visits to communities of oppressed people,” he said. “It means building ongoing relationships with many persons from marginalized communities and engaging in those relationships for the duration of our lives.”

“The road to healing and reconciliation is never easy; it requires humility and courage,” CPI student Aaron Wadsworth added. “We are all called to walk this road, but we do not walk the road alone.”

The student organizers introduced conference speakers from various backgrounds and experiences with restorative justice. Calvin alumnus and former professor Nicholas Wolterstorff argued that restorative justice must focus on healing the breach between personal relationships rather than providing a consequence for a harm. “Aren’t persons more important than laws? Aren’t laws for the sake of persons?” Wolterstorff challenged.

Father David Kelly, the director of Precious Blood Ministry of Reconciliation, followed Wolterstorff by encouraging others to become more proximate to those affected by injustice. “We have to be willing to go in and touch the woundedness of one another,” Kelly said. “As a church, we ought to be living in the Holy Saturday moment—to embrace the hurt and pain of the crucifixion, and yet give witness to the resurrection.”

After offering statistics on the history of American incarceration, writer and speaker Dominique Gilliard spoke on America’s historic, concealed imprisonment system: convict leasing. “We are addicted to punitiveness and we have understood it as justice. As Christians, we cannot accept that definition of justice because it is morally bankrupt,” Gilliard said.

State representative and Calvin alumnus David LaGrand then provided an inside look at Michigan’s criminal justice landscape and specific legislative areas for reform. He argued that the church has a crucial role to play in this pursuit. “We need to focus on who is hurt and how we can heal who is hurt,” LaGrand said.

Jerline Riley then spoke about losing her son in February 1994 at the hands of a CPI student. She described the long reconciliation process between herself and the student, and how she now views him as a son. “I see him moving forward and doing great things with his life, because that’s what God raises us up for,” Riley said. “Seventy times seven—that’s how I feel about life. I hope I play a role in him coming home someday. I am a wounded healer, and I want God to use my story to plant seeds.”

Hope College professor and Calvin alumnus Charlotte Van-Oyen Witvliet concluded the conference by speaking on the dehumanization of the incarcerated and the power of forgiveness. “We cannot confuse an image bearer of God with the wrongdoing of which they are responsible,” Van-Oyen Witvliet said. “This person needs to undergo positive transformation; that transformation helps us pivot away from desiring that person’s destruction.”

The conference was made possible by Handlon’s Restorative Justice Club, which meets biweekly to learn about how to become part of the movement toward a more personable and just society. Professors Thomas R. Thompson and Matthew Walhout have been the club’s faculty mentors since the club’s inception in Fall 2017. “The club’s members and leadership are highly self-motivated and self-facilitating. We receive much more than we give, but we do provide some administrative legs on the outside of the facility,” Thompson said.

According to Thompson, the Restorative Justice Club members would like the conference venue to vary institutionally and ecumenically throughout the coming years to achieve greater awareness and participation in the restorative justice movement. In March 2017, the first West Michigan Restorative Justice Conference took place at Hope College.

Currently, efforts are being made to launch a chapter of the Restorative Justice Club on Calvin’s main campus, which would interact and coordinate with the CPI chapter’s interests and efforts.