Creating an award-winning prison reform conference from behind bars 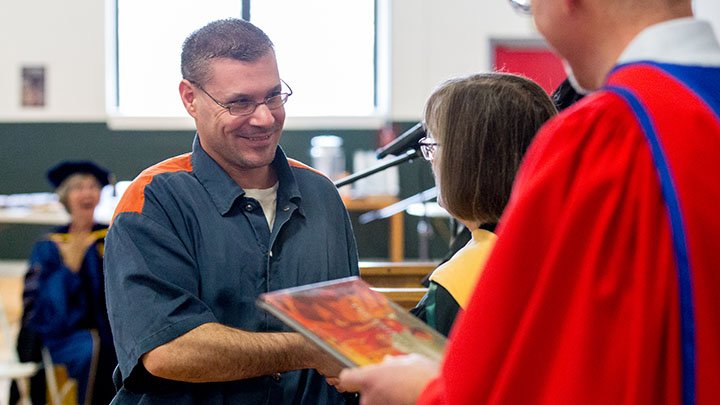 The topic of prison reform has increasingly gained national attention and interest, in part because of the rising voices of the incarcerated. Calvin’s very own Eric Boldiszar, a student at Handlon Prison through the Calvin Prison Initiative (CPI) program, was recently awarded for creating a conference to facilitate the continuation of the prison reform conversation.

In 2016, Boldiszar began his work toward what would become the Hope for Restoration: Radical Hospitality and Prison Reform conference, held at Hope College in March 2017. Boldiszar presented the conference idea to Hope College religion professor Jared Ortiz in 2016, after Ortiz accepted Boldiszar’s letter invitation to attend and speak at one of Handlon’s Wednesday night book group sessions.

In less than a year, Boldiszar had speakers contacted, schedules and handouts completed, and all other conference details worked out between co-organizer Ryan Nichols and other CPI students.

The conference was originally designed for only 200 attendees, but the weekend brought in more than 300. Although it was a huge success for Boldiszar, his work would receive even greater recognition a few months later.

The NACRJ is a non-profit organization that employs principles of social and restorative justice seeking transformation in ways justice questions are addressed. Its mission is to provide a professional association for educators and practitioners and others interested in restorative and community justice.

Ted Lewis, a member of the advisory council of the NACRJ, presented at both the Hope for Restoration conference and the NACRJ conference, and was Boldiszar’s nominator for the award. Typically an NACRJ member is given the award, and this was also the first year that prison reform was incorporated into the conference, so it is all the more unprecedented that Boldiszar received it.

“America is the land of opportunity and second chances, and I dream of a criminal justice system which affords such a grace, balancing the need for justice with mercy,” Boldiszar writes. “This award is not just mine, but all of yours—it is a testament to the power of your love and dedication to social justice, improving society by acknowledging the needs of crime victims, rehabilitating offenders, and restoring wholeness and harmony to the community… I urge you not only to pray daily to God to bring the restorative justice movement to perfection, but also to write your senators and government officials to make the restorative justice movement a reality within America’s prisons.”

He also urges that people connect and work with other organizations within the restorative justice movement, as he believes the key to success will be social networking and making one’s presence known and felt.

Boldiszar’s initiative and ambition has created a ripple effect in the CPI program, inspiring other students to pursue their own projects. First-year student Jeremiah Brooks and second-year student Ryan (Dale) Colter began a gardening project at Handlon this year and will donate the produce they harvest this summer and fall to the Calvin dining services, which will use the money that would have been spent on that produce to donate to non-profits in Grand Rapids, specifically women’s shelters.

“The guys really wanted to reach out to victims of their crimes through this food donation process,” Bylsma said. “It’s a great way for them to connect with Calvin’s [Knollcrest] campus.”

The CPI students are increasingly hopeful for prison reform, as are many restorative justice leaders across the country. “We’re at a point right now—politically, ideologically, socially—that’s ripe with the possibility of changing the criminal justice system, and so I think these guys see the opportunity,” Bylsma said. “People are talking about things that have never been talked about, so they’re hearing this and want to keep the conversation going to inspire people to make those changes.”

In the next couple years, Boldiszar will have a second conference planned. “He’s ambitious,” Bylsma said. “When we [CPI leaders] step back and give these guys space to play with the ideas in their head and make programs come to life, success comes. They’ve been in the prison system; they know what needs to change much better than we do. As time allows, phase two of the conference will occur.” 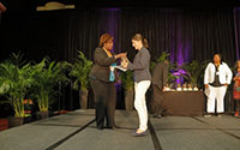 Julie Bylsma accepts the 2017 Bert Thompson Pioneer Award for Faith Based Community and Restorative Justice on behalf of Eric Boldiszar at a conference in Oakland, California.

A partnership between Calvin College and Calvin Theological Seminary, the Calvin Prison Initiative (CPI) is a unique program that provides a Christian liberal arts education to inmates at Handlon Correctional Facility in Ionia, Michigan. This five-year program results in a bachelor of arts degree from Calvin College. The program equips inmates with the knowledge and skills required to be community leaders. The hope is that through this endeavor, not only will lives regain hope, but prison culture will be transformed, and justice there will become not merely retributive, but restorative.

There are currently 40 student inmates enrolled in CPI, with the third cohort of students set to begin their pursuit of a bachelor's degree in fall 2017.