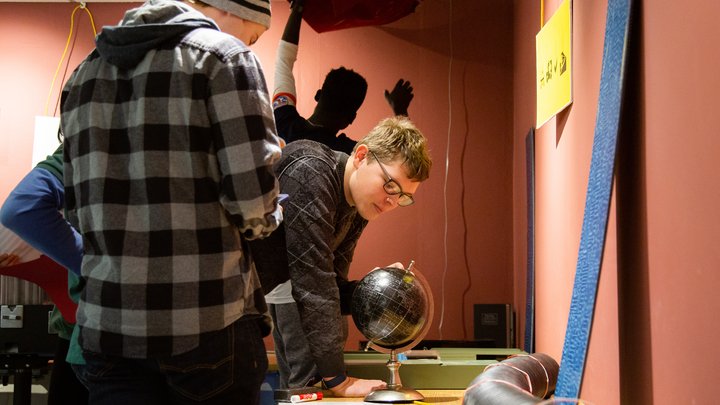 As quiet electronic music pulsed and the digits of a digital timer ticked down ominously towards zero, several students frenetically circled the slightly dim room, scanning every surface. A mix of everyday and bizarre objects were placed around the room: a gumball machine, a glowing tube, five cryptic wall hangings, a large “Go Knights” poster, three circuit boards, and several combination-locked metal boxes.

A couple of other students sat at a nearby table, hurriedly crunching through a series of mathematical problems as their team members searched for clues. Discovered codes and clues were scribbled on the whiteboard behind the table, and with nine and a half minutes remaining, the group of seven solved the final puzzle, revealing the “virus” for which they had been searching: a tangled mass of circuitry and wires with a cartoonish face. Victorious, they pushed the digital timer’s large red button.

This escape room—a converted smart classroom in the library basement—is part of a Calvin LifeWork module for sophomore students, intended to help them develop teamwork skills.

“A lot of Calvin LifeWork is structured around helping students develop their career competencies, the soft skills that employers want to see in job candidates,” said David Wilstermann, the Calvin LifeWork program analyst who devised the escape room. “Teamwork is one of those core competencies.”

“Teamwork is fascinating to me because while there are individual skills needed, teams also must have a diverse range of skills to be effective,” Wilstermann said. “The escape room highlights this need for diverse skills and perspectives—there are some tasks you can’t do by yourself, and part of teamwork is to know when to ask for help.”

Wilstermann noted that during February and March about 500 students went through the escape room. Prior to going through the room, students took a teamwork assessment scoring their ability to be a “team player” and read materials on teamwork drawing from research by management consultants and major companies, such as Google. After going through the room, students debriefed with Calvin LifeWork staff to integrate the content with the activity, discussing critical issues like the importance of psychological safety in group settings.

To supplement the module, Career Center staff are planning a video conference with several Calvin graduates who work at Google, sharing their stories about Google’s unique and successful culture.

“Much of the content is future-oriented, which can be a challenge for students because they may not fully realize the value in what we’re teaching until after they graduate,” said Wilstermann. “We’re helping students learn key life skills that aren’t typically taught in a systemized way through higher education.”

“I was a little worried about how it would work out, as I’ve done real escape rooms before, but it was good,” said Allison Vandenberg, one of the seven students, who is studying nursing. “I liked that it was hands on, and not on a computer.”

Renee Miller, an interdisciplinary student studying architecture, noted that the exercise led her group to think strategically: “We split up really quickly into groups of two, and the groups were very efficient and worked well together.

“It was a nice change that this module got us to work with other people,” she added.

Calvin LifeWork extends thanks to The Ruse Escape Rooms for their assistance and suggestions, as well as Calvin Information Technology for their loan of the room.

Working in 29 states and 13 countries

Had at least one internship during college (84%)