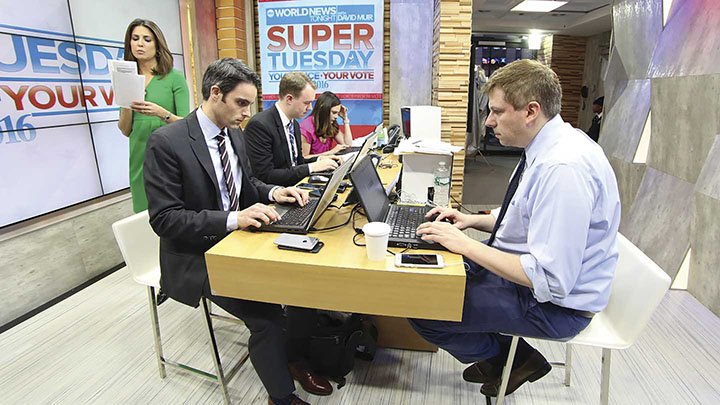 Ryan Struyk (seated in the middle) is covering the 2016 election for ABC News in Washington.

On Friday, September 23, 2016, two recent grads who are at the epicenter of political discourse in Washington will bring their expertise and perspectives back to campus.

John Muyskens ’15, a graphics editor for The Washington Post and a Pulitzer Prize-winning journalist, will join fellow alum Ryan Struyk ’14, who is covering the 2016 elections for ABC News in Washington, to talk about “Faithful Fact Checking” at 3:30 p.m. in Calvin’s Bytwerk Theater (located on the lower level of DeVos Communication Center).

The two have been digging deep into the data, trying to discern the truths and lies behind the many claims made by the candidates. They’ll share their perspectives on the “Fact Checker” phenomena and the role their media outlets have played. As active participants in the election process, they will speak to responsible engagement in politics and Christian citizenship helping the audience know what they can—and should— seek to learn the truth about, while acknowledging that it isn’t possible for everyone to become a multi-subject policy expert.

Their talk, which will be moderated by Calvin College professor of political science Micah Watson, is part of “The Challenges for the Next President Series,” which provides audiences with various viewpoints on current issues in a conversation that is not intended to be a debate, but instead presents points of view which will allow participants to become more educated and thoughtful voters as they go to the polls on November 8.

The series, which will cover foreign policy (Oct. 13) and the economy (Nov. 3) yet this fall, is sponsored by the Calvin College Faith and Citizenship Initiative and the Henry Institute. Topics covered this past spring included the environment, immigration, religious freedom and criminal justice reform. The general public is invited to participate in these in-depth conversations.

Muyskens graduated from Calvin with a computer science major; Struyk with majors in political science and mathematics. During their time at Calvin, the two worked as editors for Calvin’s student newspaper, Chimes.

For more information about Ryan and how he "now makes the world his classroom," please see the Spark Alumni Profile: Following the Presidential Race.