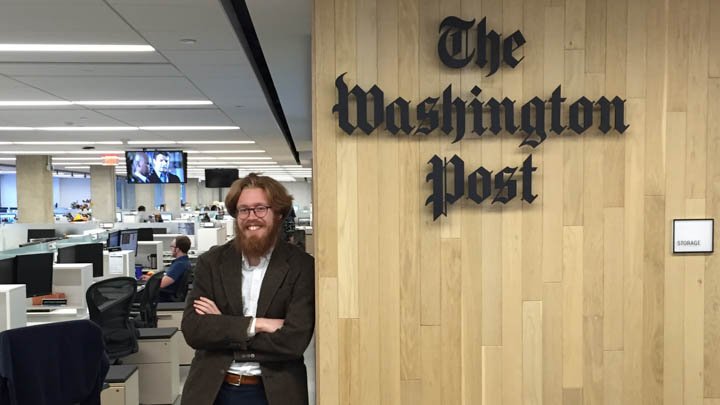 John Muyskens '15 is a graphics editor at The Washington Post.

In his final semester at Calvin College, John Muyskens attended a conference at Columbia University called “Computation+Journalism.” He went to a networking session; met a reporter from The Washington Post. That led to an interview, which led to a job. A year later, Muyskens, 23, is a Pulitzer Prize–winning journalist.

A team of Post reporters and editors, including Muyskens, a graphics editor, were honored with the Pulitzer Prize in the National Reporting category, “for its revelatory initiative in creating and using a national database to illustrate how often and why the police shoot to kill and who the victims are most likely to be.”

Muyskens said: “After the events of Ferguson in 2014, what many realized, including journalists at the Post, and the government, is there was no good data set about people who are shot and killed by police, and so out of that grew an initiative at the Post to start collecting that [data].”

In January 2015, the project got underway with researchers at the Post entering data related to fatal shootings by police into a spreadsheet. As more and more information was uncovered, the scope of the project grew, and the Post staff recognized the need to transition from a shareable spreadsheet to a database. That’s where Muyskens stepped up.

He was tasked with building the database, which has provided the Post newsroom with access to great volumes of data, organized in such a way to make it much easier for reporters and editors to do statistical analyses on the results and in turn discover the stories behind the data.

“We are able to have reporters look through our database, find interesting stories and then go out and report those stories more in depth. That’s what you read in the many stories that we did based on the database,” said Muyskens.

David Fallis, an editor at the Post, says the work that Muyskens did in creating the database was critical “because he took the broad concepts of what we needed and made them a reality.”

“The database he constructed served us on multiple levels: it gave us a platform to gather and analyze the data and a public interface to share what we found,” said Fallis. “It was brilliant work and he engineered it so that we could continue to build on it as reporting took us in new directions. We continue to use it today and will as long as we pursue the project.”

“I took two statistics classes as part of my computer science degree, and those stats classes in combination with data–driven journalism for Chimes were helping me figure out where to look for stories in the data and that helped me think about the interface to help other journalists find stories,” said Muyskens.

“Calvin helped me identify those skills, gifts and passions that I am now able to stretch even further at the Post,” said Muyskens, “and I’m really grateful for the opportunities I have to put them towards important ends.”

The database Muyskens built is working toward one of those important ends, helping to fill a void of information in an effort to provide a clearer picture.

“I think that by fulfilling our objective by shedding light on these stories [in the Post’s police shooting series] and telling these stories we are paving a way forward for justice, and greater accountability and transparency is going to be a good thing,” said Muyskens.

“John's work is a great illustration of how computer scientists create original technologies that make a real difference in our world,” said Joel Adams, chair of the computer science department at Calvin. “It’s wonderful to see John thinking deeply, acting justly, and living wholeheartedly in his work, and to see that work being honored with the Pulitzer Prize."

And Muyskens says the Pulitzer doesn’t mark an end to this pursuit—it’s simply a celebratory moment, and there is still much work ahead. He’s currently creating interfaces for students at American University who are gathering more information for the database.

“The work continues until the government starts doing our job,” said Muyskens.

And Fallis, a well respected editor who has been with the Post for 17 years, sees Muyskens’ work on this project marking just the beginning of a successful career in his field.

“John has many, many strengths and I think it’s the sum total of those that will continue to serve him well in journalism,” said Fallis. “This project showcased in particular his ability to take an abstract group of questions and turn them into something meaningful, useful and revelatory. That kind of problem-solving is often at the heart of great journalism.”