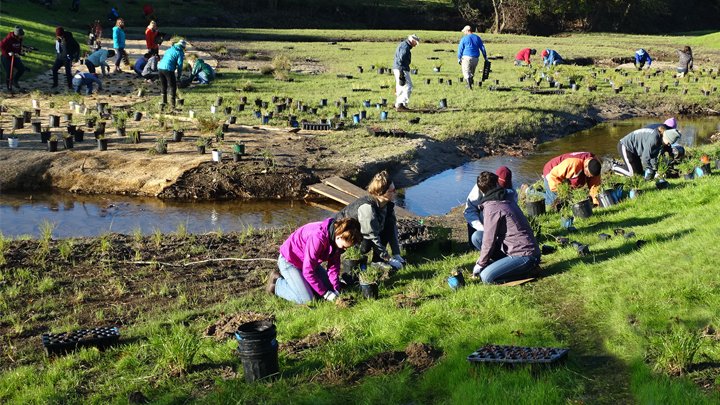 Dozens of volunteers worked on the project at Shadyside Park in Dutton. (Note: This photo was taken before the COVID-19 pandemic)

The coming kingdom Dave Warners reads about in Revelation 22 “doesn’t include streams full of contaminants that kids can’t play in.” Instead, he pictures “a clean river running through the heart of a city where kids can swim and splash and where biodiversity is introduced back to live with humans.”

Warners, a biology professor at Calvin University, encountered the antithesis to this right in his own backyard back in the early 2000s. His residence, his place of work, his church—all within one of the most contaminated watersheds in the state: Plaster Creek.

“Calvin University, the Christian Reformed Church headquarters, many Reformed churches are all in the watershed,” said Warners. “That’s a lot of Christians from the same theological heritage, a heritage that speaks highly of creation not just as a backdrop of God’s plan for human salvation, but as part of his redemption plan. These are beautiful words. They are. But it struck us as so tragic that the stream that drains the watershed where all these Reformed Christians are living is so contaminated. So, it created a real sense of uneasiness and tension.”

It was something not only Warners felt, but also a group of his colleagues at Calvin. It led Calvin faculty in 2004 to design service-learning projects for students to collect data on the state of the watershed. They also organized stream clean-ups with other community partners. A few years later, in 2008, a group of concerned organizations, including Calvin, began meeting regularly to discuss steps that could be taken to improve the watershed.

A conversation after one of those meetings in 2008 served as a catalyst. A representative from the Michigan Department of Environmental Quality who had been having some trouble connecting with a Christian farm owner who lived upstream, approached Warners and Gail Heffner (co-directors of PCS until Gail retired last year) asking if they would reach out to a particular farm owner, and help activate the faith community in west Michigan.

“It was an epiphany moment,” said Warners. “We realized that we [Christians] were complicit in the degradation of the creek.”

The following summer, Warners and Heffner, with support from the Calvin Center for Christian Scholarship organized a three-day workshop for local churches focused on theological foundations for creation care, the basics of watershed ecology, and practical strategies for watershed restoration.

Out of that workshop came the Plaster Creek Stewards—an initiative of Calvin University faculty, staff, and students working with local schools, churches, and community partners to restore the health and beauty of the watershed.

The group’s desire to create change was clear, but they didn’t get off to a great start. The first nine grant applications they submitted were denied, leaving the group discouraged. But, in these early years, they learned valuable lessons that shaped their approach. They realized they needed watershed residents to better understand the core problem.

“It became pretty obvious that cleaning up the creek was not our primary challenge, because if we clean up the creek and do not change the behaviors that are contaminating the creek, we can check off the “cleaned- the-creek” box, but it will get degraded all over again,” said Warners. “We needed to work on the relationship between the people and the creek—convince them this is your creek—you live in this watershed, this is your creek, and it needs your help.”

And so they did. And their 10th grant was accepted: $58,300 from the US Environmental Protection Agency to focus on education, awareness building, and an oral history project to be done by Heffner. That was just the start. A decade later the Plaster Creek Stewards have transformed over 30 acres of watershed land into natural habitat, given more than 500 educational presentations, installed 80 curb-cut rain gardens and restored floodplains to mitigate flooding and erosion downstream. They have also worked with many local schools who have now incorporated local watershed ecology into their curriculum, and have received more than $4 million in external grants to support this work. Along the way, the group has involved over 40 faith communities and hundreds of volunteers in this hopeful work of watershed restoration.

Plaster Creek Stewards’ most extensive project, funded by the The Michigan Department of Environmental Quality, wrapped up this past summer at Shadyside Park in Dutton Township. The massive project took four years from proposal to completion and included the installation of 220 trees and 70,000 perennial plants.

What was once a creek with unhealthy streambanks was turned into a beautiful floodplain with a thriving ecosystem.

“This summer as I stood on the new bridge that was built as part of the project, looking at the floodplain that was all in flower, with so many birds, so many butterflies, and two kids playing in the creek, it hit me – all of the hard work on this project was worth it.”

And the work continues.

Earlier this year Plaster Creek Stewards received two separate Great Lakes Restoration Initiative (GLRI) grants. One of these extends PCS’s curb-cut rain garden initiative in the Alger Heights, Garfield Park, and Oakdale neighborhoods. The other one is funding the planting of 390 trees in the watershed. Both these projects began in the summer of 2020 and will finish up in fall, 2021. Next summer will be especially busy for PCS because they were also awarded a grant from the USEPA and Michigan Department of Environment, Great Lakes, and Energy for $806,000 that begins this fall and extends to December of 2022. For this grant, PCS will be doing another large floodplain restoration project, additional rain gardens, and will install permeable pavement in the parking lot of one of their church partners.

“We heard early on that you can’t just flip a switch and clean a creek, there’s a lot of momentum behind degradation,” said Warners. “It takes years of concerted work.”

But, the momentum seems to be shifting inside this watershed. And a university that was once complicit is now invested deeply and seeing the beautiful words in its heritage and mission blossoming into beautiful landscapes.

“In my understanding, this work is right down the middle of the fairway in terms of our mission to be change agents,” said Warners. “We are in the creation, working to enhance it. We’re trying to show what the coming kingdom will look like.”