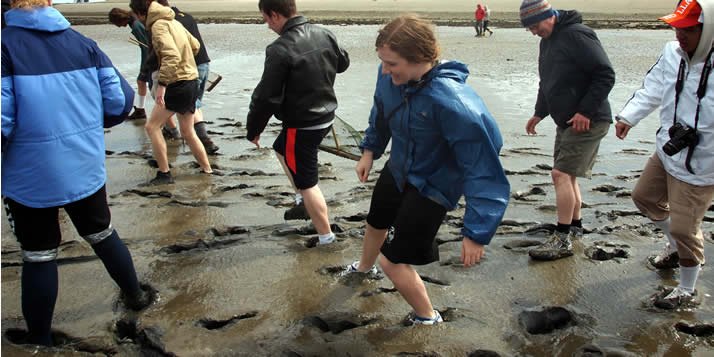 A geography professor writes about walking the mudflats of the Wadden Sea during last spring's Semester in the Netherlands.

I had long wanted to take my students in the Netherlands for a walk on the mudflats of the Waddenzee (literally, sea of mudflats). Usually Calvin students are there during January Interim when winter conditions make wadlopen (mudflat walking or hiking) difficult. But now with Calvin’s spring semester in that country, getting out on the mudflats at low tide is much easier. And so on May 5, the national holiday to commemorate the WWII liberation of the country, we made our way from Amsterdam to the island of Texel, the most westerly of the Frisian Islands. From the northeastern tip of that island, we clambered over the sea dike and launched ourselves on to the mudflats at low tide, armed with nets and digging fork and led by an American-trained biologist.

The Wadden Sea is a very extensive intertidal zone between the European mainland and the Frisian Islands, stretching all the way from the Northern Netherlands to Denmark (satellite map). In 2009, most of this zone was designated a UNESCO World Heritage Site in recognition of its natural significance.

Twice every 24 hours at low tide, much of this zone (some 4700 km2) falls dry exposing mudflats, oyster beds, sandbanks, tidal channels and marshes; high and low tide differ by more than two meters. When ‘dry’ it becomes a rich feeding ground for a wide variety of wading birds and sea ducks (especially migratory birds) such as redshanks, sandpipers, curlews, oystercatchers and plovers. They feast on the snails, clams, crabs, shrimp and barnacles found in the rich organic mud, which contains a wide variety of micro-organisms, especially algae.

When dry, the Wadden Sea becomes accessible not only to wading birds but also to people. It is a strikingly unusual setting also made inviting by the experience of walking on the bottom of the sea. Wadlopen is seen as a required experience for every Dutch man and woman and has become a staple of Dutch identity together with such things as bicycles, skating on natural ice, caravan (mobile home) vacations, and potato mashes.

Since the 1960s, wadlopen has become a form of mass tourism in the Netherlands, one that combines adventure, exploration and education. Regular and organized excursions led by guides are available from a variety of starting points on the islands and mainland, as well as from boats.

Back to our experiences. Everyone had been told early on that appropriate footwear was a must. Wet feet is not the main hazard but, stepping right out of your shoes with feet suctioned down into the mud and losing both one’s shoes and balance is! Footwear such as old ankle sneakers and boots that can be tightly laced are key. And so, with the right shoes and with both eagerness and some apprehension, we set out on the mudflats and, wouldn’t you know it, the very first area we traversed had the thickest mud mousse. Our guide advised us to walk with a skating-like motion to distribute our weight and, if we got our feet stuck, to lift our heels to release the suction. “So, we took off, to suddenly sink in past our ankles,” recounted junior Melanie Janssens. “I got stuck almost instantly and nearly got face-planted in the muck but managed to save myself. Eventually, we got a rhythm going, and we were hustling along pretty well.”

Learning from the mud

Our guide gathered us together at several spots and, using the digging fork, exposed vertical strips of lighter to darker layers of mud. She spoke of the biodiversity of the soil and extracted worms, crabs and snails from her sample to make the point. “What I found so impressive about the flats was how what appeared at first to be a desolate field of mud turned out to be teeming with life—fish, crabs, oysters,” commented junior Owen Selles.

We crossed oyster and mussel beds and sand bars and netted and sampled organisms in tidal channels. We became more experienced at keeping our footing, and the surfaces also became more stable. After two and a half hours we returned to our starting point with new knowledge and appreciation of this rich and crucial intertidal zone. “I thought wadlopen was GREAT fun!” Melanie summarized the experience on her blog. “The physical exertion was well within all of our capacities, and it was the perfect combination of education and entertainment.”

There are many wadlopen videos on YouTube. Check them out! 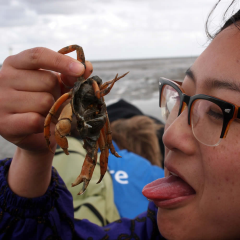 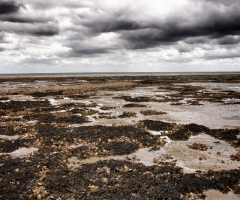 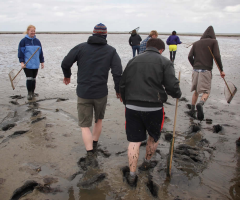 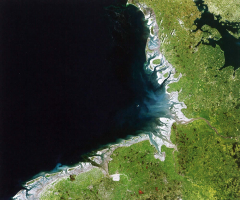