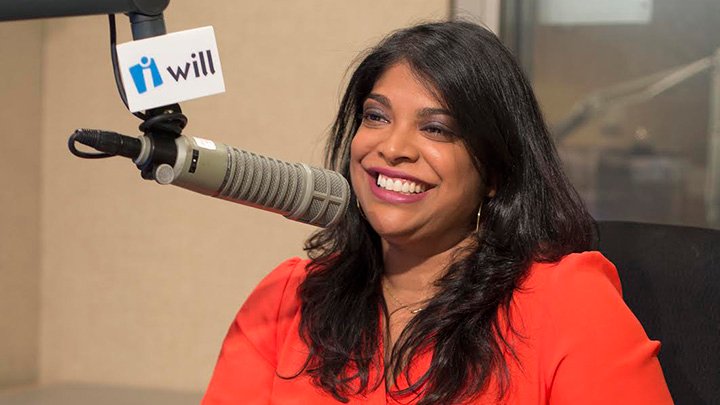 Niala Boodhoo with Illinois Public Media on WILL.

To Niala Boodhoo ’96, public radio talk shows are like live, one-hour rollercoasters that you can’t get off of—and every weekday, she loves the ride.

Her new talk show, The 21st, airs on weekdays at 11 a.m. on Illinois Public Media’s WILL radio station, and airs on partner stations WUIS, WGLT and WBCU. She joined Illinois Public Media in fall 2015 to work toward The 21st’s soft-launch in March 2016, which began airing daily in May 2016.

Before becoming the startup host and executive producer of The 21st, Boodhoo worked as a writer, reporter and host for news sources such as Reuters, Sun-Sentinel, The Miami Herald and Chicago Public Media.

Now, Boodhoo brings news, culture and stories from Illinois into conversation with Illinoisans, with discussions both lighthearted and serious in topic. “The whole point of the show is news that reflects the Midwest and people in Illinois. If it’s national news, we want it to be from that perspective—what people here [in Illinois] are talking about,” said Boodhoo.

Whether she’s producing news segments, reporting, or meeting and talking with Illinoisans, Boodhoo is in the know. Once a week, she and her team meet to discuss ideas for the show and develop an execution plan. Sometimes, plans are made a month or two in advance; other times, an hour before the show. Accuracy and speed are essential to her job, which she is now well-seasoned in.

Journalism has always been much more than a career to Boodhoo, though. “I’ve always known that journalism was my calling. I wanted to feel like I was a part of history and recording it,” she said. “I think now, being a part of public media, it’s really important for me to be part of a mission-driven news organization. I’ve always thought that journalism is so essential to democracy. It’s important that people have a voice in their community and know they have a place where they can be informed about what’s happening in their community.”

Although her responsibilities as a Calvin Chimes editor shy in comparison to the responsibilities she now has with The 21st, Boodhoo looks back on her time at Calvin as very formative years. After achieving her bachelor’s in philosophy and psychology at Calvin, she went on to get her master’s in journalism at Northwestern University, as well as her master’s in Latin American and Caribbean studies at Florida International University.

Boodhoo strongly believes in the “reformed and always reforming” mentality and uses it with The 21st, where she engages with a variety of people, opinions, topics and events across Illinois to keep the state educated and learning in conversation.

“Whether they’re authors, artists, business people, teachers, activists or just doing their thing throughout the state of Illinois, I really enjoy being able to have great conversations with people every day and bring that to other people,” Boodhoo said.

“Our mission and our vision is to give voice to people that maybe sometimes don’t have a voice, and to bring people together. You hear our callers come from all across the political spectrum, and we hear that on our show regularly, so I appreciate that. It’s a place where people can have a reasonable, intelligent, civil conversation.”

As an influential voice in public media, Boodhoo hopes to continue making a positive impact in Illinois with her passion for people and for journalism. “I’m very grateful for the fact that I find work very meaningful and fulfilling,” she said. “A lot of people don’t have the opportunity to do that, so I put up with other things every day because I know I’m able to do this.”