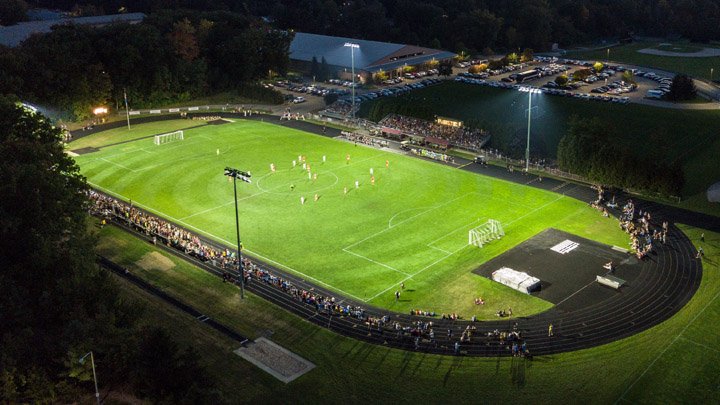 “It is pretty special.”

"For us, that's a game changer,” said Souders after the team’s 2-0 victory over Hope College in their inaugural game under the lights on Saturday, Sept. 16. “It makes a fun atmosphere for our students, a great atmosphere for our players and, as a coach, something I really love being a part of. A huge thanks to our donors. It's a game-changer for our program."

The lighting project, proposed by athletic director Jim Timmer, is completely donor-funded and provides access to the soccer field and track after dusk for men’s and women’s soccer, lacrosse and track & field.

"It was a great opportunity to play under the lights and have the opportunity to take part in Calvin history," said Calvin senior Anica Pausma. who scored a goal in the inaugural night game. “The atmosphere and the fans were terrific. We are excited for many more night games at Zuidema Field for both the women's and the men's teams."

Jim Timmer, athletic director at Calvin College, said the addition of the lights has multiple benefits for student athletes—one being that it opens up more options for practice times and pre-season training with soccer, lacrosse and track & field teams all competing for space. And, it allows competitions to take place more often outside of the busy academic afternoon schedule for many student athletes.

“The lighting project has exceeded our expectations. The field looks great under the lights, it allows our students to miss less class time, and it makes our facility more flexible,” said Timmer. “Finally, it provides a great atmosphere for our student-athletes and community.”

“The time change [of the competition] helps students be able to stay for the game instead of having to leave early or come late, which is typical,” Timmer said. “We’re hoping this will bring more excitement and an overall better atmosphere to sporting events.”

The first week under the lights has illuminated this potential.

A Homecoming Under the Lights

And with the new lights, there are more options for the whole campus to have events at night outside. One of those is happening during Homecoming Weekend on Saturday, September 30, when there will be a tailgate and a doubleheader with men’s and women’s soccer games under the lights.

“Both opening nights for our soccer programs were huge successes and we are looking forward to the rest of the season,” said Timmer. “I would like to thank our donors, advancement department and Calvin’s physical plant for making this project a reality.”

“We did not know what it would like in the dark and now we do,” said Recker. “It is pretty special.” 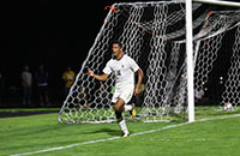 Bobby McCaw scored both of the Knights goals in their 2-0 win over Hope in the men's soccer team's debut under the lights. 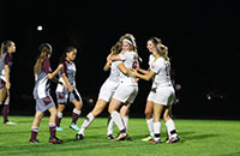 Women's soccer players celebrate a goal in their 4-0 win over Alma on opening night under the lights. 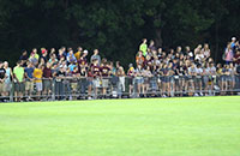