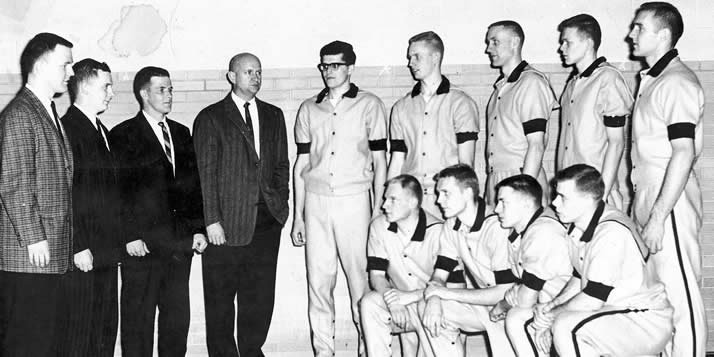 On February 16, Calvin will honor its 1960–'61 men’s basketball team which became not only the first team in school history to reach the 20-win mark, but also the first team to go undefeated, as the Knights finished 20-0 overall and 12-0 in the MIAA.

The team, coached by Barney Steen, found its groove right from the opening game of the season and never let up on a magical run that still has fans talking about the squad more than 60 years later.

“It was just a really fun team to be on,” said Carl DeKuiper, an All-MIAA point guard on that 1961 Calvin team. “We got along so well, and it was great fun to play for Coach Steen. We had great fan support too—particularly from the student body, the faculty and our administration.”

The Calvin community had good reason to support the Knights that year as they outscored their opponents by 20 points a game, averaging 86 points a game on offense and 66 points on defense. The foundation of Calvin’s success was its rebounding prowess as the Maroon and Gold averaged 55 boards a game while allowing opponents just 33 caroms per contest.

“We had size and we also focused on blocking out,” recalled Warren Otte, a starting forward on the team. “Once we got the rebound we were off and running on the fast-break. We were scoring 86 points a game in the days before the shot clock and the three-point shot. We just played a little different brand of ball than most of the teams we played that year.”

Calvin’s backcourt tandem of DeKuiper and junior Len Rhoda also provided a huge spark. “Both of those guys could really handle the ball,” said Calvin’s starting power forward Ralph Honderd who would later go on to coach the Calvin men’s basketball team for seven years.  “Carl in particular was a tremendous athlete. He had been a great football quarterback at Fremont High School as well as a basketball and baseball player. He could really run and had great balance and body control.  He knew where to get you the ball too, particularly on the fast-break. That motivated you as a player to keep running because if you did, you knew you were going to get the ball.”
Indeed.

In Calvin’s season opener, the Knights toppled Central Michigan University 75-66 in Grand Rapids.  “That was a big win to start the year,” said Otte. “Beating Central Michigan was a bit unusual for us and that helped build momentum.”

A few weeks later, Calvin hosted a powerful Central State team from Ohio at Grand Rapids Christian High School. The Knights blew out their opponents 87-60, one day after Central State had handed Hope College a defeat in Holland. “That game got us a lot of attention too,” recalled Otte. “I remember Barney (Steen) came in at halftime and we could hear him saying to his assistant coaches ‘What do I say to these guys after a first half like that?’ because we had played so well.”

Calvin then handed Olivet and Ferris State double-digit defeats and before a crowd of more than 5,000 fans at the Grand Rapids Welsh Civic Auditorium, subdued their rivals from Hope 98-79. In the rematch with Holland three weeks later at the Holland Civic Center, Calvin rolled to a 97-77 victory, giving the Knights an overall record of 16-0.

At that point, the pressure began to build for an undefeated season. Calvin kept its perfect slate alive with a 67-58 win over Adrian and then took out Albion 103-79, setting up a frantic final two games.

The first of the final two came on a homecoming Saturday at Godwin Heights High School in the Grand Rapids suburbs of Wyoming. Playing against a nationally-ranked team from Taylor, Calvin trailed by seven points at halftime in front of a sellout crowd. Fueled by the Calvin faithful in attendance, the Knights rallied for a 95-87 win. “They had us at halftime,” said Honderd. “The crowd really helped us and we found a way to come back.”

Sitting at 19-0, the Knights had one game left to play—at Kalamazoo College in its cracker-box of a gym known as Tredway Gymnasium. With seats on only one side of the court, the facility could hold no more than 1,000 fans but somehow a large group of Calvin students found a way to squeeze inside. “I probably shouldn’t say this, but some of the Calvin students found a way to make counterfeit tickets,” laughed Honderd. “Once the game started, people were hanging from the rafters and the Calvin fans far outnumbered the Kalamazoo fans.”

Determined to prevent Calvin from reaching a perfect season as well as the 20-win plateau, the host Hornets fought tooth-and-nail with the Knights throughout the game. “It was definitely one of the most physical games we played in all year,” said Otte. “We ended up going to the free throw line and did a good job of using that to our advantage.

In fact the Knights connected on 24 of 26 free throws - at that point, a Calvin single-game record. Rhoda led the way with 20 points as the Knights completed the undefeated season and wrapped up the MIAA championship with a 12-0 league record.

Waiting for the Knights back in Grand Rapids was a jubilant Calvin campus. “My roommate had made a banner that said: MIAA Champions which got hung right in front of the administration building,” said Otte. “Once we got to campus, President Spoelhof was there to greet us and he offered words of congratulations in front of the student body. It was pretty neat.”

The following morning a special assembly was held in chapel. After the morning chapel service, class was canceled for the remainder of the day. “I don’t think that would happen nowadays,” chuckled Otte.

Honderd, starting center Bill “Goose” Wolterstorff and DeKuiper were all named to the All-MIAA team while Otte, Rhoda and reserve Henry De DeMots received All-MIAA second honors. Wolterstorff finished his career with 1,015 points which at the time, made him just the second player in Calvin history to reach the 1,000 point plateau.

Despite the team success there was no post-season for the Knights. Just two years earlier, rival Hope accepted its second consecutive bid to the National Small College Tournament and advanced all the way to the national quarterfinals.  A year later however, the MIAA placed a post-season ban on team sports for its member schools. The post-season ban not only prevented Calvin’s 1961 team, ranked 10th nationally at the conclusion of the season from advancing to the post-season, but also prevented several standout Calvin teams down the road from doing so, most notably the teams in the mid-1970’s coached by Honderd and led by dominating center Mark Veeenstra.

“I think our 1961 team would have done well if we had been given the chance to compete,” said Honderd who later saw his son Steve win a Division III national championship at Calvin in 1992 while Ralph served as Calvin’s director of men’s athletics. “The whole post-season ban was really based around what the league was doing with Hillsdale and its football program at the time. Hillsdale was dominating the league in football and going to post-season bowl games. The league was looking for a way to get Hillsdale out and the post-season ban effectively caused Hillsdale to leave.”

More than 60 years later however, the records, statistics and achievements are not what stand out in the memories of the players, it is the friendships and support of the Calvin community that holds fast.

“We try to stay in touch as much as possible,” said DeKuiper who now winters in Florida after spending several years working with the Gerber Corporation in Fremont. “Everyone is still alive at this point but many of us live out-of-state. Sometimes it’s by Christmas cards or things like that but we all have such wonderful memories of our time together and the friendships that were built.”

The team members have gone on to live productive lives. In addition to Honderd, Rhoda and Jim Timmer Sr. all taught and coached at the collegiate level.  Rhoda and Timmer both coached at Dordt with Timmer later moving on to Calvin.  Wolterstorff went on to a high school teaching career while DeMots pursued a career as a medical doctor while Dan Bos became a Christian Reformed pastor.

The players also have fond memories of playing for the late Barney Steen and the late Don Vroon who formed the coaching staff at the time. “It was an honor to play for Coach Steen,” said DeKuiper. “I have so much respect for him.”

Otte also remembers it that way. “Steen and Vroon were both great guys to play under,” he said. “It was just a lot of fun.”

A longtime Christian school teacher and administrator, Otte now works part-time with the Zaagman Memorial Funeral Home in Grand Rapids. It is there that he frequently receives mentions of Calvin’s 1960-61 team.

“When we have visitors, people come up to me and say that they still remember our 1961 team,” said Otte. “Many of them say that they remember as young boys or girls listening to the games with rapt attention on the radio, wondering if we could keep our undefeated season alive. My wife always rolls her eyes when she hears these stories but it just goes to show you what kind of a following we had back then.” 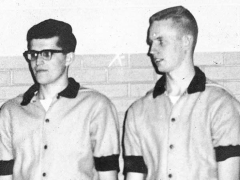 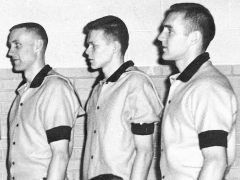