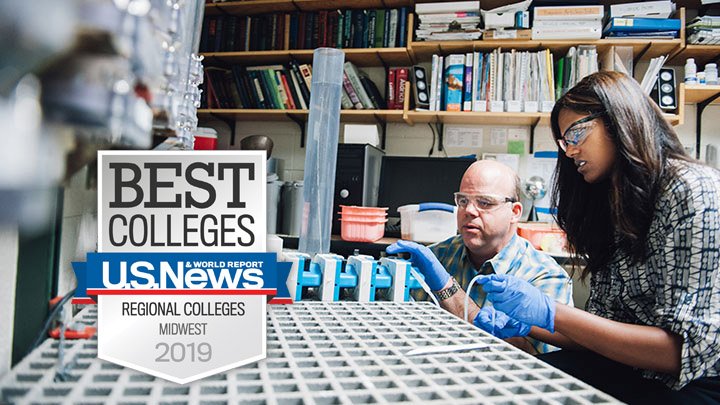 Released online today, the report helps prospective students and their families evaluate colleges and universities based on 16 widely accepted indicators of excellence, such as first-year retention rates, graduation rates, and the strength of faculty. The report also takes into account qualitative assessments by administrators at peer institutions.

“Calvin’s mission to equip students to think deeply, to act justly, and to live wholeheartedly as Christ’s agents of renewal in the world remains our constant source of motivation,” said Michael K. Le Roy, Calvin College president. “It is encouraging when independent sources like U.S. News & World Report recognize the exemplary work of our faculty, staff, and students.”

In addition to sharing the top overall ranking among its peers with Taylor University in 2019, Calvin also garnered U.S. News' #1 ranking among Midwest regional colleges on its “Best Undergraduate Teaching" list, and appeared in the top five of its lists of “Most Innovative Schools” and “Schools with the Most International Students.”

Calvin was also listed as a “Best Value School” by U.S. News & World Report, and the college’s engineering program received special recognition as one of the best undergraduate engineering programs in the country. The college tied for 71st among schools whose terminal engineering degree is a bachelors or masters.

For more information on the rankings, visit usnews.com.

About Calvin College
Founded in 1876, Calvin College is a top-ranked, liberal arts college that equips its more than 3,700 students from 45 U.S. states, 65 countries and five Canadian provinces to think deeply, to act justly, and to live wholeheartedly as Christ’s agents of renewal in the world. Calvin is proud to offer 100+ majors and programs, including graduate-level offerings in accounting, education, and speech pathology and audiology. Calvin students engage in intensive internships, community-based service learning, and significant research that results in publishing and presenting alongside world-class faculty.

And the college’s 400-acre campus, located in the vibrant city of Grand Rapids, Michigan, serves as a launching pad for students who, in any given year, participate in 40 faculty-led off-campus programs on six different continents. Discover more at www.calvin.edu