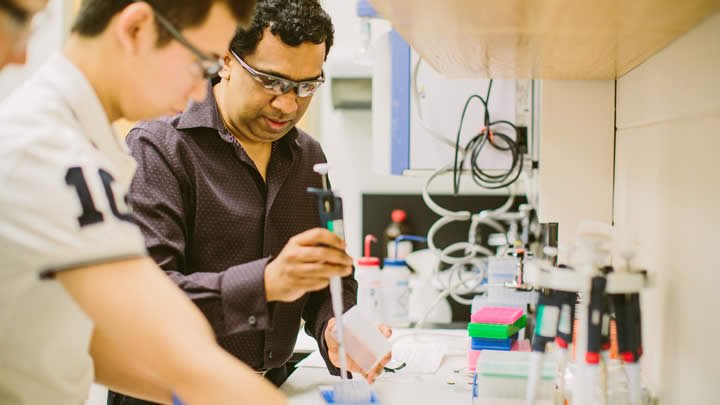 Faculty and students are co-partners in research at Calvin College.

Calvin College is again ranked among the top colleges and universities in the 2015 U.S. News & World Report’s Best Colleges Guidebook.

This year, U.S. News highlighted schools with outstanding examples of eight programs prized by education experts, including staff members of the Association of American Colleges and Universities. One of the programs involves undergraduate research and creative projects. Calvin College is one of just 32 institutions nationwide to crack the list in this category.

A plethora of opportunities

For Calvin’s dean for research and scholarship Matt Walhout, the recognition, while an honor, comes as no surprise. He says each summer more than 100 students representing a broad range of professional fields, including the humanities and social sciences, as well as STEM disciplines, get full-time, on-campus research jobs that allow them to collaborate with faculty members. And, he says “during the academic year, this same kind of ‘extra-curricular’ research continues alongside academic courses, which naturally give students additional opportunities to spread their scholarly wings.”

Walhout is a champion of the master-and-apprentice model that has been the hallmark of Calvin’s undergraduate research programs. “The value of this one-on-one educational approach is well known, and Calvin is strongly committed to seeing it prosper,” he said.

Chemistry professor Eric Arnoys says the college owes much of the thriving culture of undergraduate research in the natural sciences at Calvin to pioneers like Ted Dirkse and Enno Wolthuis, who began research with students in the 1940s, and to professors like David DeHeer, John Van Zytveld, Roger DeKock and Ron Blankespoor, who engaged students in world class research through the 1980s, 1990s and 2000s. Arnoys says these professors and others pushed departments to hire faculty intent on mentoring undergraduate students in high quality research projects.

"These opportunities for high-level experiences have continued to expand through grants from agencies such as the National Institutes of Health and National Science Foundation (NSF) to fund research, new instrumentation, and renovation of state-of-the-art research space like the ISRx interdisciplinary research lab," said Arnoys.

Walhout says the college also offers research opportunities in the context of academic course work. “My colleagues in several departments are innovating in course-based collaborative projects, in which a class of a dozen or more students can make substantial research contributions, even as they are still learning technical concepts and methods.

“In astronomy, students not only are taught how to use advanced imaging techniques but also are assigned to discover and track asteroids that have never been documented. In biology, students not only learn how to study DNA but also discover and characterize viruses about which little is known. Students in business, nursing, engineering, environmental studies and several other programs also do coursework involving team-based research, often in conjunction with community partners in local municipalities, neighborhoods and businesses.”

And most of these projects culminate in the opportunity for students to present their work at regional and national conferences or to co-author papers in professional publications. This past year, alongside their faculty mentors, students presented at the Midwest Nursing Research Society conference, the Society of Environmental Toxicology and Chemistry conference and the Michigan Academy of Science, Arts and Letters, to name just a few representative venues. Since 2008, more than 250 Calvin students have been listed as co-authors in national publications.

Opportunities like internships also offer chances for students to work alongside mentors in placements that range from start-up non-profits and medium size businesses to national media companies.

"Calvin's English department requires a semester-long internship that has helped our students understand our discipline, and the humanities in general, as a sustainable component of vocation," said Don Hettinga, professor of English.

And Calvin’s platform for undergraduate research and community collaboration continues to grow with its selection as one of just 12 institutions nationwide to be granted a Beckman Scholars Program and with the college securing more sophisticated research equipment through a $338,000 NSF grant. And, just last month, chemistry professor Doug Vander Griend was one of seven faculty members in the U.S. to be named a Henry Dreyfus Teacher-Scholar—an honor that comes with an unrestricted research grant of $60,000. Donors also fund research in the humanities through the McGregor Undergraduate Research Program, which supports 12 to 15 student researchers each summer in the humanities and social sciences.

Like the U.S. News ranking, Walhout says, these awards recognize and reinforce Calvin's commitment to excellence at the forefront of undergraduate research. 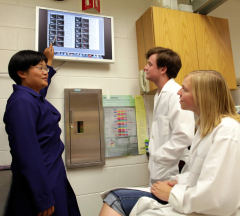 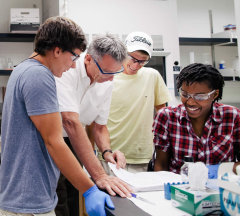 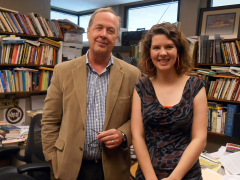 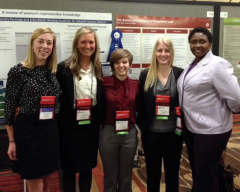 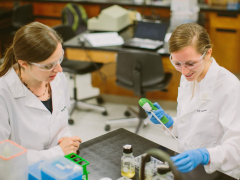