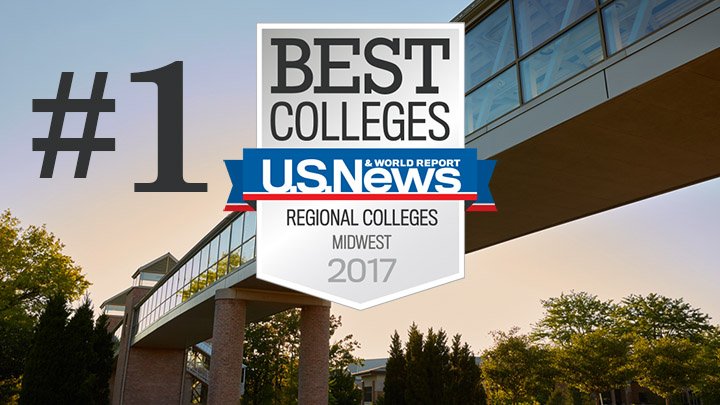 In addition to the #1 overall ranking on the Midwest Regional Colleges list, the college is also ranked #1 in undergraduate teaching.

Calvin College is ranked #1 overall among Midwest regional colleges in the 2017 U.S. News & World Report’s Best Colleges Guidebook. Calvin is the only higher ed institution in Michigan to garner a #1 ranking in its category.

Released today, the report helps prospective students and their families evaluate colleges and universities based on up to 15 widely accepted indicators of excellence, such as first-year retention rates, graduation rates and the strength of faculty. The report also takes into account qualitative assessments by administrators at peer institutions.

In addition to sharing the top overall ranking among its peers with Taylor University, Calvin earned the #1 ranking in two subcategory lists: “A Strong Commitment to Undergraduate Teaching” (being cited most often for having this strength by college presidents, provosts and admissions deans in the Midwest Regional ranking category) and “Best Colleges for Veterans” (by being certified for the GI Bill, participating in the Yellow Ribbon Program, and having more than 20 students use GI Bill benefits in 2015-2016.)

“Calvin’s mission, rather than rankings, anchors us in our educational vision, but independent validation from U.S. News encourages us to believe that faithful work will be recognized by others,” said Michael K. Le Roy, Calvin College president.

Calvin College is also ranked highly on a couple of other lists, including U.S. News’ “Best Engineering Programs,” where Calvin places among the top 50 institutions whose highest degree is a bachelor’s or master’s. The college is also among the top five Midwest Regional Liberal Arts Colleges for its percentage (10% in 2015-2016) of international undergrads.

About Calvin College
Calvin College is a top-ranked liberal arts college that equips and empowers its nearly 4,000 students from 46 U.S. states, 55 countries and six Canadian provinces to think deeply, to act justly and to live wholeheartedly as Christ’s agents of renewal in the world. Calvin is proud to offer 100+ majors and programs, with advanced courses that have often been compared to graduate-level experiences for their remarkable depth of learning.

U.S. News & World Report uses the Carnegie Classification of Institutions of Higher Education in sorting schools for rankings purposes. In February 2016 Carnegie reclassified about 12 percent of ranked schools (including Calvin College), which was reflected in U.S. News moving Calvin from the National Liberal Arts Colleges category to the Regional Colleges Midwest category.

The reason for the reclassification (the third time Calvin has been reclassified since 2000) was because recent data shows that slightly more than 50 percent of Calvin students graduate with majors in professional degree fields: such as business, education, engineering and nursing, and slightly less than 50 percent graduate with majors in the arts and sciences fields: such as biology, English, math and philosophy.