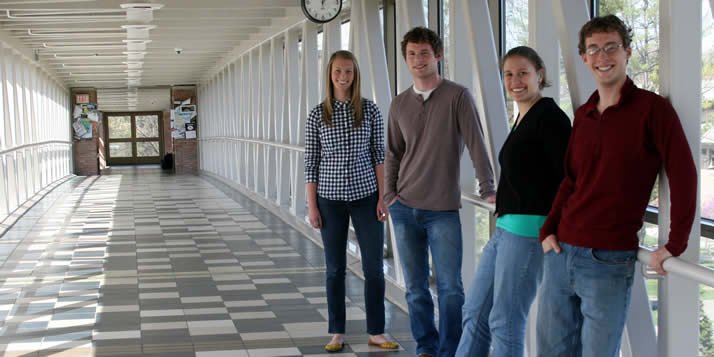 Last week was Goldwater season, and Ryan Martinie was checking the website. “I was checking way too often,” confessed junior biochemistry and biology major. After many clicks, he learned that he had won a scholarship from the Barry M. Goldwater Scholarship and Excellence in Education Program. While celebrating, he took the time to inform Anna Plantinga that she too was a Goldwater Scholar for 2012. “I was surprised,” confessed the 20-year old junior mathematics and biology major from Grand Rapids, Mich.

Lauren Manck learned she had landed a National Science Foundation Graduate Research Fellowship when she was checking her e-mail. ““I think I read the e-mail at least five times through right then before I actually believed it,” said Manck, a 22-year-old senior chemistry major from Fort Wayne, Ind.

Nathan Romero found out about his NSF grant while traveling: “I was on my way to visiting a graduate school, and when I got off an airplane, I had a text from a friend at Hope … . He said, ‘Congrats on the fellowship ... 2 from Calvin, 2 from Hope. I can live with that,’ recounted Romero, 21, a senior chemistry major from Grand Rapids.  “I almost didn't believe him until I checked my e-mail. He's a great person and an excellent scientist, so it was cool to find out from him, even if he goes to the wrong school.”

The Goldwater Scholarships were established by the U.S. Congress in 1986 to fund students studying the traditional sciences, mathematics and engineering. An institution can nominate only four candidates a year. “Our track record on Goldwaters is really impressive,” Anderson said.  “Over the past four years, we have been awarded 10 fellowships (out of 16 nominees) and four honorable mentions, and that puts us in a really elite group.” Goldwater scholars are awarded up to $8,500 for each of two successive years to help with tuition, fees, books and room and board.

The NSF award is likewise a signal honor, Anderson said: “Most of the people writing proposals are already graduate students, writing about what they’re already doing. For Nate and Lauren, they’re writing proposals in the abstract… It’s certainly an honor, and it puts them in an elite group of people who have won these before graduating.”

The NSF graduate research grant funds tuition, room and board, a stipend and travel expenses for three years at a graduate school of the recipient’s choice. Romero and Manck (both of whom were Goldwater Scholars last year) believe the grant will give them more flexibility in choosing a graduate program. Also, said Romero, “It will give me a few extra resources to do research in graduate school that will impact the field.” (Romero hopes to use part of his funds to start or support basic science programs in predominantly Hispanic areas.)

All four students are committed to a future in science research.

Martinie, a Goldwater honorable mention, is studying the formation of tyrosine-cysteine crosslinks with chemistry professor David Benson and has published computational chemistry work with professor Roger DeKock. He hopes to teach and research.

Plantinga is researching “macroautophagy” (self-eating) in melanoma cells with Dr. Jeff MacKeigan in Van Andel Institute’s Systems Biology Lab. She hopes to teach in a private college like Calvin: “Students get exposed to a lot, and you get more invested in the students,” she said.

Manck is studying “molecular tinker toys” with chemistry professor Douglas Vander Griend. Last year, she studied the chemical defense system of marine diatoms at the University of Cadiz in Cadiz, Spain through the National Science Foundation Research Experience for Undergraduates Program. Manck hopes to someday teach at the university level.

Romero researches, with Anderson, “how to make new and interesting molecules efficiently,” he said. He too hopes for a career in both teaching and research.

All four students describe their Calvin research experience as a vocational turning point: “When I was a freshman, I wanted to be a professor, but I mostly wanted to teach, and I knew I had to get a PhD, and that was a means to an end,” Martinie said, “but then I got my first experience in research, and it was like, ‘This is amazing! I want to do this for the rest of my life.’”

Manck agreed: “It allows you to be as curious as you want about something and then really work at figuring that something out.”

Research can take a long time, Plantinga said: “There's quite a bit of waiting time while cells grow and while experiments are running.”

It can also be frustrating, Manck added: “Sometimes it can take a lot of times of trying things and them not working out until finally you try something new, and it works brilliantly or you get a great set of data or interesting results.”

Yet ultimately, research is an adventure, Romero said: “What better way to learn than to study something no one has looked at before?”

The science division received notification of the Goldwater and NSF honors all in the same week: “It was a good week,” Anderson noted. “It’s a lot of fun working with topnotch students, and it’s really fun when everybody realizes that they’re topnotch.”