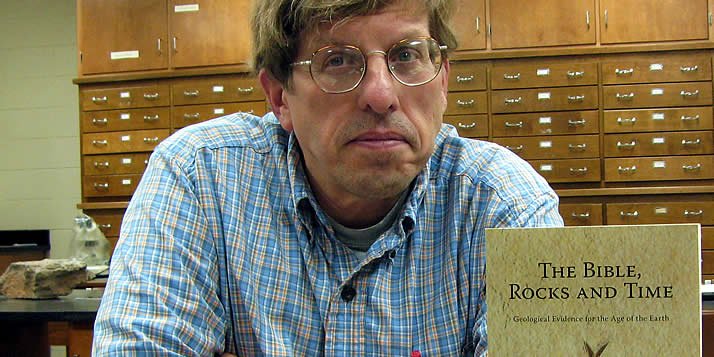 Two geology professors collaborate on a book about Christianity and the age of the earth.

For Calvin College professor of geology Ralph Stearley, a couple of books decades ago came at the exact right moment for him as a budding geologist and a recommitted Christian.

Both books were by then Calvin professor of geology (now emeritus) Davis Young. The first was Creation and the Flood, and it came in 1977, a time when Stearley was digging deep into an exploration of the age of the earth, driven, he said, by his new-found passion as a follower of Jesus Christ.

“I had graduated in 1975 from the University of Missouri with a degree in anthropology,” he recalled. “But in 1973, as a college student, I had had an awakening, or a reawakening as a Christian. And so after graduating I started to throw myself into really studying and trying to understand the age of the earth from a Biblical perspective.”

Books came just when he needed them

Initially that study came in the form of a geology class here and there on the Missouri campus, where he was working. He spent a fair bit of time, he said, trying to approach the issue from a young earth creationist perspective. But he found himself getting discouraged.

Then he bought a copy of Creation and the Flood. It was a lightning bolt for Stearley—unapologetic about both scripture and the science behind an ancient earth.

“It was a tremendous help,” Stearley said. “It came just when I needed it.”

As Stearley dug deeper and deeper into his new-found zeal for both geology and his faith he eventually decided to quit his job at Missouri and he moved, with his wife and infant son, to Utah where he enrolled in a geology master's program at the University of Utah.

That's when he came across a second Davis Young book—1982's Christianity and the Age of the Earth. And, as with the first book, Young made a major impact on Stearley.

Naming a son for Davis Young

As Stearley talks about those days he remembers that he was not the only one for whom Young's thoughtful, scripturally based and scientifically grounded writings resonated.

“There was a fellow among our group of Christian graduate students,” Stearley said, “and Davis Young's books were so important to him, he was so thankful, he named his first child after Davis Young. His first son is named Davis. It's hard to overstate what those books meant for a generation of young Christian geologists.”

Now, Stearley and the man who so inspired him early in his career have collaborated on a re-write and major expansion of Christianity and the Age of the Earth. Just out from InterVarsity Press is The Bible, Rocks and Time, an update of the book that changed Stearley's life a quarter of a century ago.

The new book had its genesis in an off-handed remark Stearley made to Young in 2002 when he casually asked his colleague: “What would you think about collaborating on a revision of Christianity and the Age of the Earth?”

Stearley had been at Calvin for a decade at that point, having begun in 1992, while Young was nearing his 2004 retirement. Together the two had taught a trio of Calvin interims. And Stearley had used Young's books in many of the classes he taught at Calvin.

But that fateful day in 2002, Stearley’s query got Young thinking, and soon after he agreed that a revision was a good idea. They agreed to the project.

“It was slow early on,” said Stearley, “but after Davis retired, and after a sabbatical last year for me, we started to make some progress.”

Both were motivated, said Stearley, by the same things that motivated Young in the 1970s and 1980s and that continue to motivate Stearley today as a teacher, a scientist and an author.

“The goal of the book,” he and Young wrote in the preface, “is to convince readers, on both biblical and geological grounds, of the vast antiquity of this amazing planet that is our God-given home.”

Stearley said the book is aimed at a wide audience: Christian pastors, theologians, biblical scholars, students and lay people with some interest in scientific questions, but non-Christian readers as well.

Said Stearley: “We want to speak to Christians and let them know that the Bible does not demand belief in a world created only a few thousand years ago. But we also want to show non-Christians that acceptance of modern geological conclusions regarding an ancient earth is not incompatible with biblical Christianity.”

Love for the Bible, commitment to a biblical worldview

Early reviews of the book suggest that Stearley and Young hit their mark in speaking to Christians and non-Christians alike.

“Their love for the Bible and for the world that God made, their commitment to a biblical worldview, and their patient explanations of scientific principles are exemplary, as is their respect for those Christians with whom they disagree,” wrote Jack Collins, a professor of Old Testament at Covenant Theological Seminary.

That last bit was especially gratifying to Stearley, who carries with him a keen awareness of his role as a professor and his responsibilities especially to students who hold to a different view of creation than he.

In fact, a few years back, Stearley was the faculty mentor for a student group which was formed, a young earth creationism group. The group no longer exists—the students who were most interested in the issue graduated, he said—but the experience lives on for Stearley as an example of finding common ground and being willing to listen to other points of view.

“We saw eye to eye on most things,” he said.

That willingness to find agreement is a hallmark of The Bible, Rocks and Time as well.

Stearley and Young write in the book: “We agree with proponents of the traditional view (of the age of the earth) that Scripture is not simply a record of the religious beliefs of ancient Israel. The Bible is not a book of human religious opinion. We believe that the Bible is the infallible Word of God, and is, therefore, normative for our faith and life. Scripture teaches us what we are to believe concerning God and what duty God requires of us. As such, Christians must take the utmost care in dealing with the text.”

Stearley extends that care he takes with the Bible to all of his reading. He continues to seek out a variety of sources by which to integrate his faith with his scholarly passions, just as he did three decades ago when he first began this casual exploration of God's creation that became a career.

That includes staples such as the classic Reformed confessions, including the Belgic Confession and the Heidelberg Catechism, which he finds inspiring and grounding, the writings of John Calvin, and, more recently, the translated works of Dutch theologian Herman Bavinck, a compatriot of Abraham Kuyper.

Stearley said he appreciates Bavinck's concept of anthropomorphism, especially as it relates to the creation accounts in Genesis. Bavinck said simply that God stooped to speak to humans in human terms, for if he were to speak to humans in divine language, no one would be able to understand him.

From these sources and his own study, Stearley has come to a belief that when Genesis talks about days, that term does not have to mean human days, that is 24-hour days.  By that reckoning the age of the earth no longer needs to be the 6,000 or so years that young earth creationists espouse.

Comfort in the Reformed approach

Stearley, who joined a Christian Reformed Church plant in Missouri in 1978 and has been a member of the denomination ever since, said that the Reformed approach to creation has been very comforting to him over the years.

“Reformed theology is robust enough to accept creation for what it is,” he said, “to believe that creation also reveals God’s truth. It’s not just scripture. I believe, and the Reformed faith affirms this too, that scripture is inerrant. But the Bible is not a science handbook. Augustine said that Genesis was the hardest book of the Bible to figure out. What is God's purpose for the early chapters of Genesis? For some people that’s a tightrope.”

Stearley hopes that The Bible, Rocks and Time might for some turn the tightrope into a bridge. But he's leaving his book's reach in his God's hands.

“I really pray that God would use the book,” he said, “that it would be salt and light. If God wants to use it, he can. If he wants to bury it, he can.” 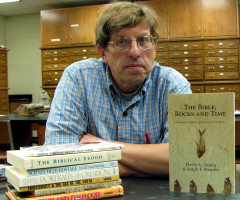 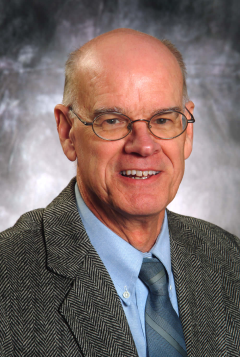 The Bible, Rocks and Time was funded in part by the Calvin Center for Christian Scholarship, which will host a conversation with Davis Young and Ralph Stearley on Friday, Nov. 14 at 3:30 p.m. in Science Building 010. They will be interviewed by Calvin professor of English Susan Felch and will speak on a wide range of topics related to the book, including its possible impact in science classrooms among the general public. Cake and punch will be served after the conversation in the DeVries Hall Atrium. The event is co-sponsored by the CCCS and Calvin's geology, geography and environmental studies department.

The Bible, Rocks and Time is available at Calvin's Campus Store.