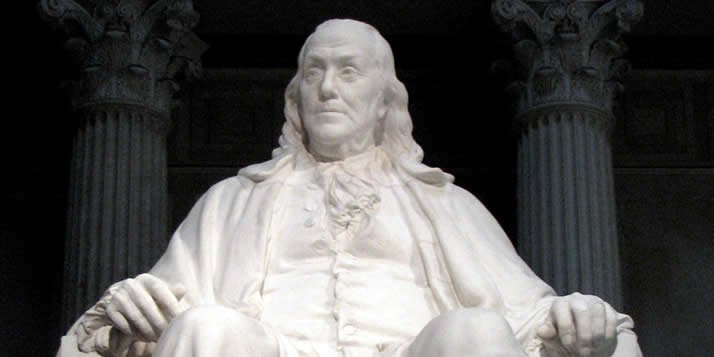 Founding Father. Discoverer of electricity. Publisher of Poor Richard’s Almanack. Signer of the Declaration of Independence.

Any of these serve as an apt descriptor of Benjamin Franklin.

"For most people the image of Benjamin Franklin is of a fat, jolly old guy with bifocals,” said Don Hettinga, Calvin professor of English.  “He was so curious about everything, and he was always figuring stuff out.”

Hettinga, though, has discovered much more about the life and times of this man who helped America win its independence: “One of the wonderful things about historical or cultural research is it’s so messy,” he said. “You start tugging at a loose string on Ben Franklin’s vest and lots of things start unraveling.”

Hettinga spent the past summer in Philadelphia researching several mid-18th-century Pennsylvania residents for a possible historical novel. His work was supported by a grant from the Calvin Alumni Association.  Ben Franklin and his less-prominent  son William quickly became central to his study.

"I found a lot of potential for a story about Ben Franklin through the eyes of William, his illegitimate son,” said Hettinga. “When I thought about a story about Ben Franklin for young adults, I imagined either a lot of patriotic cheerleading or eye rolling from kids.  But looking at his life through this relationship with his son seemed like a good way into it. There is a love-hate relationship there.”

The historical-novel idea turned into a prospective biography of William Franklin. “As William was growing up there were significant things the two participated in together,” said Hettinga. “They did the electrical experiments together, and the two Franklins worked together to convince Philadelphia to put together a militia at the start of the French and Indian War.”

But when young William decided to remain a Loyalist, the elder Franklin took issue with that decision. This is when we see a darker side of Benjamin, according to Hettinga.

William was imprisoned during the Revolution, and Ben kept William’s wife from communicating with him. He also took William’s son Temple to France and after the Revolution used Temple as leverage against William.

Assembling all of these lesser-known facts together in a biography should offer new insight into William and Benjamin Franklin and, hopefully, make for interesting reading among young adults, Hettinga said.

While based on people from the 18th century, many of the lessons are timeless: “It’s an interesting generational thing. It’s about parents who aren’t as educated, who sacrifice to give their children better, and then the children learn different values and it causes real tension,” he said.

While the anticipated book is a variation of Hettinga’s original plan, it fits well with his interest: “I’ve always been in the area between literature and history,” he said.  “I have an interest in the relationship of story and history.”

He has some practice as a biographer as well. Hettinga penned The Brothers Grimm (Clarion Books, 2001), a biography of the German fairy-tale writing duo.

His main ambition for the project, though, is to bring the experience into the classroom. “Doing this kind of research gives me an opportunity to learn,” he said. “It keeps me a perpetual student. I think that’s important for a teacher. If we are learners as well as teachers, one hopes that we can let that excitement show in the classroom. We’re excited about discovering new things.”

Besides the excitement for learning, Hettinga hopes to bring real lessons to the classroom. “For my feature writing class, I’d like to have them take an incident from history, something maybe that I discovered while reading Ben Franklin’s Pennsylvania Gazette, and write about it for a popular audience that would  read about history.

"It’s a challenge for me because I would be writing with them, and we could be sharing drafts. It makes for a powerful learning moment about the reality of writing: that it is always a process.”