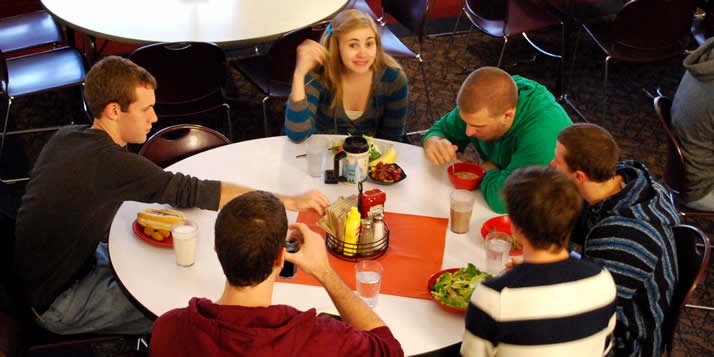 Calvin's dining services is working to become green and has started with “Tray-Choice” Tuesdays, intended to promote savings in food, water, energy consumption and waste.

When students come to college they have a lot of choices to make: which classes to take, where to live, what to major in, to name a few. Students at Calvin now have one more choice to make: whether or not to use a tray.

“Tray-choice Tuesdays” begins this spring as a way to introduce students to dining without a tray. It may seem like a minor preference but going “tray-less” can promote significant savings in food, water and energy consumption and waste.

“We want to let students try it out and then get their feedback on what they think about it,” said Rick Balfour, Calvin’s director of dining services. “And instead of going tray-free, we’d like to give students the choice by still offering the trays.”

To reduce use, on Tuesdays staff members will move trays to a more centralized location in the dining halls instead of introducing them as the first items in the line.

“When it’s the first thing in the line, just about everyone is going to grab a tray without even thinking about it,” said Balfour. “We’re trying to get students to stop and think about it.”

Going tray-less is a relatively new concept, but already more than 30 colleges and universities have tried it, including nearby Grand Valley State University (Allendale, Mich.), which went tray-less in the fall of 2007.

The notion that tray-less dining is eco-friendly  came to the forefront after a study released last summer by ARAMARK, a food service company that serves more than 400 colleges and universities—Calvin, though, is not one of them. In the study, ARAMARK found that washing one tray requires at least one-third to one-half gallon of water. Much of that water is heated and includes dish detergent and sanitizer.

Calvin serves an average of 24,000 meals a week, so the environmental impact of doing without trays could be lessened by nearly 12,000 gallons of water a week and a significant reduction in detergent and sanitizer use.

Tray-less dining can prove to be a balancing act for some students carrying more than one bowl of food and a drink.

The survey also found a 25- to 30- percent reduction in food waste per person on tray-less days, an average of 46 pounds per person per year.

“It’s pretty easy to grab a bunch of food and put it all on a tray,” said Balfour. “The eye is always bigger than the stomach.”

But without a tray, the eye can only demand what two hands can hold.

Such was the case for three Calvin sophomores, Sammie Ripley, Leah Evans and Angela Hughes, who regularly dine at Calvin’s Uppercrust, a small campus dining facility serving 200 to 300 students a day. Tray-choice was implemented here at the beginning of the semester.

The trio was enjoying chicken Caesar salads and a beverage during a recent lunch. None was bothered by the lack of a tray.

“That’s how it was for me,” said Evans. “You take some of each and then when you sit down you decide what you’re actually going to eat. This way you have to be deliberate. If you want something else, you have to go back up there and get it.”

All agreed that it wasn’t much of a sacrifice to save more energy and waste less food.

“Most of the time the trays hardly even get dirty,” said Hughes. “It does seem like a waste to have to wash them all every time.”

Ripley believes that not many students would complain about switching to trayless in all of the dining halls.

“Even if a few do complain for a few years, after that it just becomes what you’re used to,” said Evans.

Ripley, Evans and Hughes echo the sentiments of most college students who, according to the ARAMARK study, favor tray-less dining. An overwhelming 79 percent indicated that “they would accept the removal of trays in an effort to reduce waste on campus.”

Dining trays are available in the Uppercrust, but students must find them stowed away in a corner of the facility.

“Our dining equipment makes it impossible to totally eliminate the use of trays,” explained Balfour. “The chain conveyer system doesn’t allow dishes to be returned without a tray. Other colleges that have done it have a conveyer belt return system. That is something that we are definitely looking into for the new Commons.”

For the short term, the dishwashing staff needs to find a way to better handle overstacked trays that are circling on the current conveyer. The addition of some bussers to help with dishes and trash that is left at the tables because students can’t handle all of the items needed to be returned at once might also be necessary.

While going tray-less is one step towards a greener college campus, other steps have already been taken by Creative Dining Services including the introduction of reusable lunch bags (saving an estimated 30,000 paper bags per year), using pitchers of water instead of bottled water at catered functions, switching to unbleached napkins, buying local whenever possible and experimenting with the use of green chemicals.

“Each new class of students that comes in is more apt to want to adopt these changes,” said Balfour. “Changes are not only accepted, but expected from our younger crowd.” 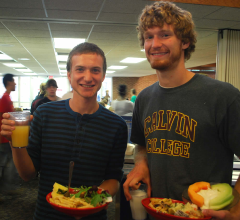 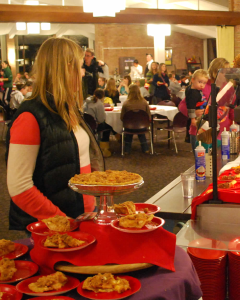