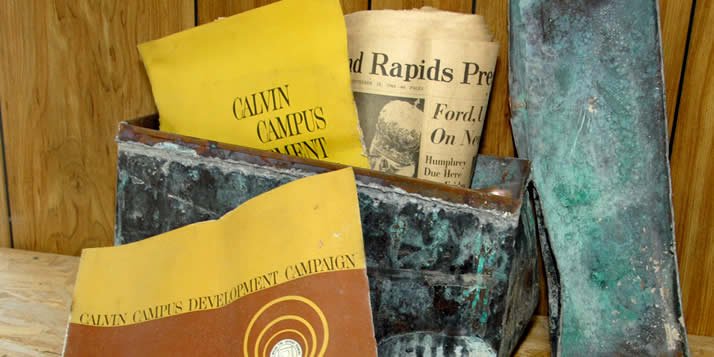 Construction workers at the site of the new Spoelhof Athletic Complex uncovered something other than dirt and old brick this week. As the date stone of 1964—the year the fieldhouse was completed—was carefully removed, a dented metal box was found behind the 44-year-old piece of concrete.

Contents of the time capsule found in Spoelhof Fieldhouse construction include 1964 copies of The Banner, Spark, Chimes and The Grand Rapids Press, as well as a Bible and fundraising materials for the fieldhouse.

Construction workers at the site of the new Spoelhof Athletic Complex uncovered something other than dirt and old brick this week. As the date stone of 1964—the year the fieldhouse was completed—was carefully removed, a dented metal box was found behind the 44-year-old piece of concrete.

“It’s not unusual to find something like this on a project like this,” said Ken Coulston, superintendent for Christman Co. construction, which is heading up the fieldhouse renovation. “It’s always kind of exciting, though.”

Inside the time capsule were various items from more than four decades ago, including a copy of the Sept. 18, 1964, Grand Rapids Press (from the day before the building dedication), a photo of the 1963-64 basketball team, Michigan Intercollegiate Association records from 1963-63, a Bible, campaign materials used in the fundraising for the new fieldhouse and a copy of the Banner, Spark and Chimes.

“The idea behind time capsules is so that we can do exactly what we’re doing today,” said college archivist Dick Harms, who was called over to inspect and collect the material from the box. “So we can open it up and say, ‘Oh, this is pretty interesting stuff.’”

Most of the materials already exist in the archives, so it doesn’t really add anything to the history of the place, he said. “What is most interesting is discovering what they thought would be interesting for us to see,” he said.

A noteworthy find in the campaign materials was a thin, plastic 33 1/3 RPM record labeled “Share in the Care of your College” that was presumably sent to all potential donors. “I’m sure,” remarked Harms, “this was the height of technology at the time.” Calvin’s audio specialists will attempt to decipher the 1960s campaign message.

While the time capsule is not unique—the Calvin archives has records of several others that are buried in buildings around campus—the unearthing of it is; only one has previously been “discovered” on the Knollcrest campus. The contents of the original library capsule of 1962 was added to the Hekman Library capsule in 1994 at the dedication and renaming ceremony.

The contents of the fieldhouse capsule will eventually be on display in the Calvin archives.

To learn more about Calvin's history, delve into the Heritage Hall archives. 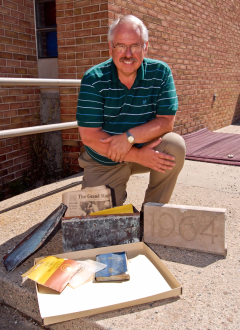