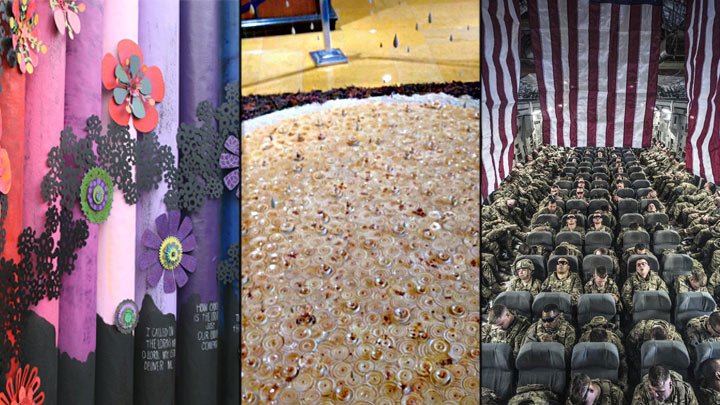 For each of the Calvin alums among the finalists at ArtPrize, it’s the message portrayed through their work that they believe is affecting voters in the annual competition.

Nicholas Kroeze ’73, Ryan Spencer Reed ’02 and Carol Roeda ’70 are among the top 20 in the public voting portion of the international competition. Their works were selected from the more than 1,500 entries in this year’s contest.

Kroeze’s “The Pond” is a three dimensional piece consisting of more than 2,000 individually carved wood sculptures of raindrops, ripples and splashes forming a pond during a rainstorm.

“I think what people like about it is the sense of peace that captures them,” said Kroeze, whose sons and son-in-law also contributed to the piece.  “What captures people’s imagination is the interaction of hard wood expressing soft water.”

Kroeze, who explains woodworking as his principle hobby, said that the subtle scripture message accompanying his piece is God’s common grace. “I enjoy working on pieces that are spiritually interpretive,” he said.

Reed believes his piece is garnering attention because “it’s different. It’s not what people are expecting at ArtPrize: to see a small sliver of reality.”

Reed’s “Despite Similarities to Reality, This is a Work of Fiction” is a documentary photography installation comprised of 61 images Reed took over 13 months while accompanying the 506th Parachute Infantry Regiment. The images, supplemented with audio of war sounds also taken by Reed, span from training to deployment to return.

“What I hope people recognize through this is that we don’t get enough reality from our media sources on what war is really like,” said Reed. “I think people are at odds with what they knew before [they saw the exhibit] and what they are seeing. I think they are shocked by it.

“I hope it gets them asking tough questions and getting more engaged. I would like to ensure that the wars we enter in will be as honorable as the services we expect from those who are actually a part of it,” he said.

Roeda’s “Color Out the Darkness” is a semicircle of 25 10-foot-tall pillars constructed from cardboard, tar paper, wood, metal and paint. The exterior of the colonnade appears somewhat intimidating, while the inside, awash with color, welcomes the viewer in.

The piece is meant to be experienced over time, said Roeda, “giving the viewer the opportunity to go from darkness into a place of celebration and hope.”

Meaningful quotes are posted on the columns to further impact the viewer. “People are really resonating with it,” said Roeda. “Something I had not foreseen is that this piece is a witness, and people are responding to that. I’ve prayed with a lot of people who have told me they are in a really dark place.”

ArtPrize, the world’s largest art competition, was started in Grand Rapids, six years ago as a civic project: a way to engage the public in conversation about art. Prizes have traditionally been awarded by public vote, although recently juried awards have also been added. Voting is open until Oct. 9 at midnight. For more on registering, click here.

Calvin parent Robert Shangle is also among the finalists with “Your Move.”

Shangle’s work is an oil painting in three dimensions: a sculpture in the style of an oil painting, depicting a man alone in his room with a game of chess. If you view it at the right time, you may be able to see him make his "move.”