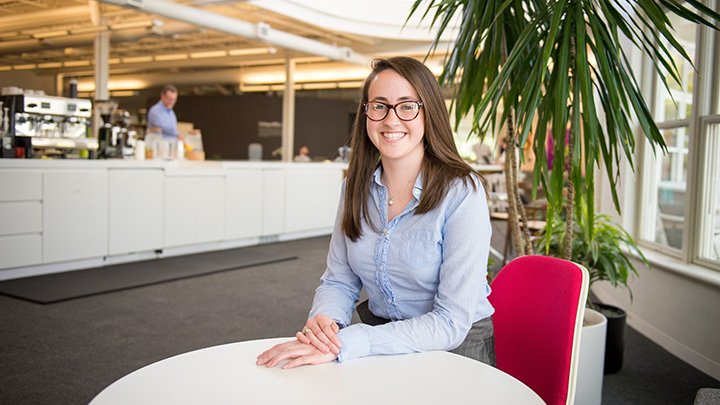 As an employment specialist, Jamie Cheeney recruits employees for all 12 Kamps Pallets plants.

While studying business at Calvin, Jamie Cheeney ’15 learned how a business could be significantly more positive and productive when fueled by Christian principles. Since working for Kamps Pallets, she has been able to see and practice that ideology.

Cheeney first began working for Kamps Pallets her senior year as an intern making training manuals and updating the employee handbook. She began her full-time work the week after graduation as an employment specialist.

Kamps Pallets, a pallet recycling and manufacturing company, was started by Bernie Kamps. “Bernie likes to say he started recycling before recycling was cool, because he started this company 40 years ago,” Cheeney laughed.

“They really embrace a lot of the Christian business practices [at Kamps Pallets] that we learned in business at Calvin,” Cheeney said. “Bernie actually puts them into practice, and it makes him successful.”

As an employment specialist, Cheeney recruits employees for all 12 Kamps Pallets plants for positions like pallet builders, forklift drivers and some office positions. She reads resumes, works with college and university career development offices and guides employees from their application process through their first week of employment. She was able to design the recruiting program and see it implemented.

“I love recruiting because you’re looking for a match; someone that we will benefit from, and someone that will feel fulfilled in that position,” Cheeney said. “Seeing someone so fulfilled in their work and knowing that I had a part in that is the side of human resources that I really love.”

With Cheeney’s various responsibilities, she is thankful that her business major and international development and Spanish minors are so relevant in her job. However, she attributes her preparation more to the way she was taught to work and think at Calvin.

“Calvin prepared me to think critically and question things. That gets me to see the bigger picture of things at work, or ask questions like, what does scripture tell us about this? What do I know culturally that influences the way I do interviews?” Cheeney said. “I think that’s something Calvin’s always teaching: if we’re reforming all things, how do I make this look more like how it’s supposed to be? That attitude is what probably prepared me most for this work.”

Cheeney will move on to a training and development position in fall 2016, which she will hold for two years and then transition into a compensation benefits position for another two years. In fall 2016, Cheeney will also be pursuing her two-year master’s degree program in industrial organization psychology online through Colorado State University.

With the next four years planned, Cheeney still values taking life step-by-step, seeking the Lord’s guidance each day. “This master’s degree might not be my only master’s; I’m still considering going to seminary,” Cheeney said. “It’s been a year now since graduating, and it’s a terrifying reality, but also the joy, to say that I’m following after God in this one step while waiting, asking and seeking for what might be next.”