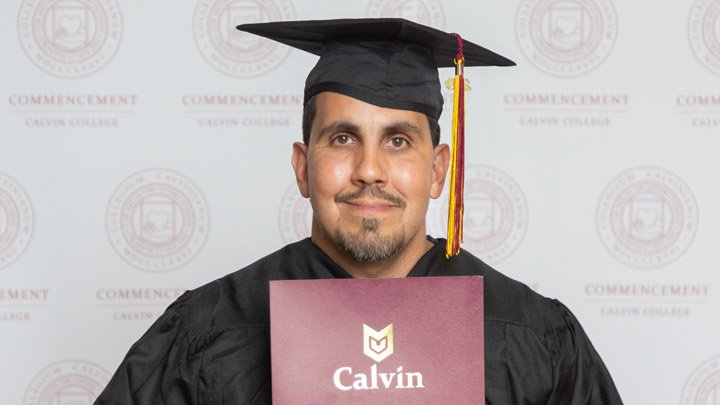 René Rodriguez’s education was a costly one.

“It has impacted my life and changed my life in so many ways,” said Rodriguez.

Rodriguez grew up in a poverty-stricken neighborhood in New York with two drug-addicted parents. When he was nine, his dad went to prison. With his mom not able to financially take care of him and his sisters, they were evicted, and the family was broken apart. His sisters went to live with a family member, and he stayed with his mother.

“That kind of left me to fend for myself, and so I took to the streets at a young age,” said Rodriguez.

Enrolled on the streets

At 9 or 10 years old, the streets became not only his playground, but his school.

His family, recognizing the path he was on, tried to pivot Rodriguez in the right direction, sending him to Michigan to a more stable environment to live with his aunt.

By his teenage years, he would soon be selling drugs and engaging in criminal behavior.

At 17, Rodriguez decided to give it one more shot with his aunt. But the gravitational pull of street life lured him back, and he found himself behind bars for a year or two for attempted robbery.

While a couple of years behind bars would have seemed to provide a wake-up call for Rodriguez, it instead gave him an advanced education.

“I went into prison culture and picked up more criminal tendencies, which is easy to pick up in this environment,” said Rodriguez. “I left prison worse than I came.”

So, Rodriguez made a point to continue to immerse himself in a culture of drug dealing and criminal behavior.

But his schooling came to a dead end in 1993, when at the age of 19 Rodriguez took a young man’s life, and in the process seemingly ended his own.

“As a 19-year-old with a life sentence, I could say that my mind was gone, I didn’t care about my life anymore, I could see no way out, so I made a conscious decision that I wanted to find a way to go deeper into the culture of prison culture.”

And so, he did. He worked to move up in the power structure.

“I wanted to make a reputation for myself, to do whatever it takes to get that status,” said Rodriguez. “I was out of control.”

With being out of control, his life would soon be very controlled. At one point. He spent most of his time in maximum security facilities (levels 4 and 5), meaning he was mostly confined to his cell, by himself. In the short time he was out, perhaps an hour a day, “you come across the worst of the worst incarcerated individuals—guys who have the same mindset as I have, who want to achieve that sense of power.”

So, there was constantly violent behavior transpiring, which kept Rodriguez stuck in these maximum-security facilities for 13 straight years, including 13 months in segregation.

During that time in maximum security segregation, which Rodriguez calls “the hardest time in my time,” he got tired and started to realize he needed to do something different. His behavior was just causing him more problems.

So, he started to learn to read, getting into books where he started to learn about his culture and his bloodline, which sparked an interest in history and then politics. But the key to unlocking a new perspective on his future came once he moved out of maximum-security prison … through a letter, a letter penned by the niece of his victim.

“She wrote me a letter that expressed how she felt about me, how I ruined her life and the damage I did to her and her family. And all these years I’ve done in prison, I never once thought about him or the ramifications about what I’d done,” said Rodriguez.

At first, he shrugged off the letter. In fact, he threw it in the trash.

But sleepless nights ensued, “because in her letter she expressed that at the time this impacted her she was a kid, and despite the life I lived in the streets I always made a promise to myself that I would never hurt kids and I would never hurt older people—that was my boundary line. So, getting her letter telling me she was a kid at the time,” said an emotional Rodriguez, “that messed me up, and I came to the realization of what I’d done. That was the lynchpin that turned my life around.”

So, he was face-to-face now with his past.

So, he started down a different educational path. He started to engage in some peer-sponsored programs, and when he was transferred to Coldwater Correctional Facility, he ran into some college students taking correspondence courses. So, he took some of these non-accredited classes. And then, they convinced him to take his education further.

“And coincidentally, Calvin came to Coldwater, and I learned about Calvin offering courses,” said Rodriguez.

In 2016, he was transferred to Handlon Correctional Facility to join the second cohort of the Calvin Prison Initiative program, the first-of-its-kind program in the state of Michigan and one of a few in the country that provides an educational path for inmates to earn bachelor’s degrees behind bars.

And this education was not only paving a hopeful future for Rodriguez, but it was also clearly illuminating all that was missing in his previous “education.”

“The first time I came to prison, I was uneducated. The first time I was learning how to become a better criminal, how to criminalize people more. And there was nothing that helped me to pivot from that mindset,” said Rodriguez.

“Malformation or good formation—any education forms you,” said Todd Cioffi, director of the Calvin Prison Initiative. “Even general education is susceptible to malformation, because it treats it as information, more of a contractual relationship.” But this CPI program is always trying to build on virtues, on a relationship that’s built on community. I think that is the difference, and these guys, almost to a guy, all pick up on that.”

The education, offered by Calvin University and Calvin Theological Seminary, is re-shaping Rodriguez.

“Calvin is providing an education that’s effective. It’s not just educating the mind of the social issues that are going on, it’s also working on the morality side of things,” said Rodriguez. “It’s not only chipping away at the old stuff, but you are also putting in new information of looking at things. That’s so important.”

“It’s brought me closer to God for sure. I’m more determined in my beliefs in God than ever before, so I’d say that’s the greatest takeaway for me.”

“I’m so humbled by the experience,” said Rodriguez, “I’m indebted to every person at Calvin. How can I repay that but try to reflect what’s good in me?”

And he’s indebted to the niece of his victim. “She changed my life, I didn’t want to be that person anymore,” said Rodriguez. “I can’t take back what I’ve done, but I now accept the responsibility for my actions, I know the harm I’ve created, I know the ramifications and ripple effects, not only for the family of the victim, but for my family, my community. It had that ripple effect.”

And Rodriguez is determined to have his future have ripple effects too.

“From here on out, one of my goals is to share my story with as many people as I possibly can and tell them how important education is—that if you want to make any type of life for yourself, it starts with education, and not just any kind of education.”