The Festival of Faith and Writing from a First-timer's Perspective 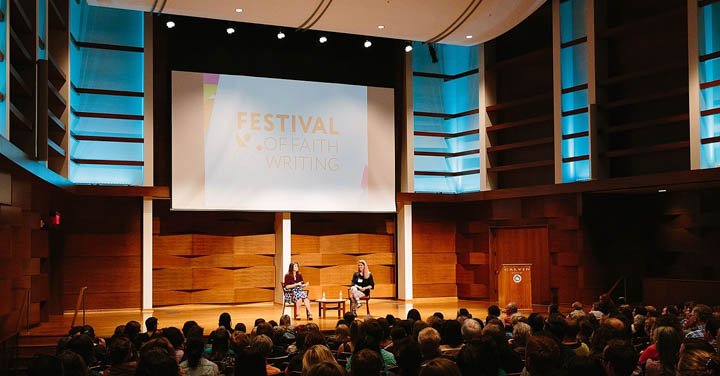 I’m sitting in the Covenant Fine Arts Center’s Recital Hall, listening to Mallory Ortberg, Slate advice columnist, editor of The Toast and one of the funniest and most insightful bloggers I’ve ever read, talk about navigating faith and sexual orientation, and how she’d actually prefer to have the problems of an ancient stylite sitting on a pole in the desert getting his food from ravens.

And even that isn’t the only contender for most memorable moment of the weekend.

The festival has been a beautiful riot of perspectives on faith, writing and the multitude of problems and processes and practices that bloom from their collision. The only sad thing about the festival is how impossible it is to attend the whole thing. With more than 70 writers speaking in concurrent sessions over three days, you could combine these sessions and come out with more possible experiences of the festival than there were attendees. Yet in this one set of sessions, I was struck by a few consistencies: good humor, craft and a deep compassion.

Just two days before, I was listening to Makoto Fujimura, the much-lauded painter and writer, talk about his explorations of the work of Shusaku Endo, whose masterwork, the novel Silence, won him international recognition. Fujimura’s style of painting involves layer upon layer — sometimes up to 60 layers — of paint mixed with stone-ground minerals to create a prismatic, refractive effect. Fujimura delivers his thoughts in a contrapposto stance next to the podium with a relaxed smile, and near-constant deference and thanks to all those who he feels helped him reach his remarkable achievements. What really stood out, though, was the subject of his talk: the artifacts of a period in Japanese history that bear silent witness to a time of persecution. Fujimura lays out this picture of history in much the same way as he paints: layer upon layer of background, of nuance, of story, of images, and with some contemplation, you come away with a brilliant image of the work of God refracted through the suffering of his people.

After browsing a very crowded bookstore for a moment, I found myself in an interview with Zadie Smith. Smith spoke with Calvin College English professor Jane Zwart (with English reserve and self-deprecation) about her many novels, her own life, and her flirtations with different faiths. She practically knocked me off my seat, though, when she noted (as if it were no big deal) that C. S. Lewis’s The Screwtape Letters had been recommended to her by David Foster Wallace. Now I have to go back and reread … so many books.

My wife and I attended a talk from George Saunders (a hero of mine) the next day. It was hysterical. But it was also encouraging. Saunders talked a little about his process — how he iterates through his texts, editing as he goes, sometimes for years. He likened a story to a friend, who might be defensive when you first criticize him, but eventually opens up if you’re persistent and kind.

Probably my favorite thing about the festival was hearing authors read their work, which many of them did. Hearing their own words in their own voice, the way they emphasized some phrases and passed over others, the parts that make them laugh — or make everyone else laugh — is much too wonderful to be so rare. There’s nothing like being in a room of book lovers, who root for the protagonists you always felt were yours personally.

So here in this interview on the last day of the festival, Mallory Ortberg is talking about some of the reasons that people write in to her advice column. As she’s musing, she also gives a great reason why people might come to the Festival of Faith and Writing.

“Sometimes they’re just looking for someone to reflect back to them, ‘You’re not crazy.’”