The economic impact of year-round schooling 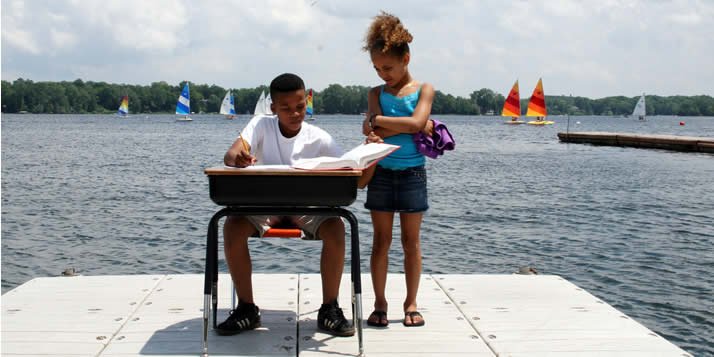 A professor-student duo researches the economics of studying all the year 'round.

Year-round schooling has long been a contentious issue and a hot research topic for educators, sociologists and psychologists. Two educational groups, the National Association for Year-Round Education (NAYRE) and Summer Matters, have voiced their opinions on questions like does summer-learning loss actually occur, and can it be eliminated by year-round schooling? Do shorter breaks result in better test scores? What about the effects on families and family vacations? And isn’t it just un-American to do away with three months of long, lazy days spent fishing, biking, swimming and hanging out with your best friends?

Enter Steve McMullen and Justin Haan, a Calvin professor and student research team, who are trying to answer some of those questions—as economists.

While many of the questions are best left to educators and social scientists, according to McMullen, he contends that economists have something valuable to add to the conversation: “Economics research is very interdisciplinary,” he said. “We’re looking at a particular policy to evaluate how it is working. Educators can look at how learning works, and there are obviously implications for sociologists and psychologists; we’re studying it as policy evaluation.”

The pair is assessing data provided by Wake County, N.C., where, in 2008, 22 schools switched to the year-round calendar, primarily for economic reasons. The district was experiencing population growth faster than it could build schools.  The implemented policy change includes multi-tracking, which has groups of students attending school at different times with different vacations, thus maximizing use of facilities.

“The change means that on any one day, one-fourth of the students are on break,” said McMullen. “It’s a more efficient use of space.”

What McMullen and Haan are evaluating the data for is the impact on student achievement. “If it doesn’t help or hurt achievement and it saves a lot of money, then it might be a good thing to go with,” McMullen said.

While NAYRE would argue that the educational outcomes are positive based on the data, Summer Matters uses tests scores that substantiate the opposite. None of the research is conclusive.

McMullen and Haan are the first researchers culling the Wake County data for an accurate assessment of its statistics.

McMullen and Haan, a Calvin senior economics major, are working together as part of the McGregor Summer Research Fellowships in Humanities and Social Sciences. Established at Calvin in 1998 by a grant from the Detroit-based McGregor Fund, the program now operates with the generous support of private donors, allowing students and faculty to work collaboratively on summer research projects. In addition to Haan, there are nine other students in a variety of disciplines working through this program.

“There are not always a lot of research opportunities for economics majors,” said Haan, a senior who hopes to do graduate work in economics or public policy or both. “This has been an interesting blend of a lot of reading of an interdisciplinary nature and econometrics (a discipline combining economics with mathematics and statistics). As straightforward as year-round schooling sounds, the actual methods and computer programs involved are very quantitative and complicated.”

By the end of the summer, the duo hopes to submit a paper for publication on their findings.

“It’s a policy decision that could or has happened around the country,” said Haan, “and there’s only been one or two credible studies done on it. It could affect hundreds of thousands of students, so it’s important to know if it’s good or bad—if the costs outweigh the benefits.”

The implications could affect decisions made in school districts around the country and as close as Grand Rapids, said McMullen. “Every school district has its own issues, but Wake County is a community that is similar to Grand Rapids. If we are able to get better information about what really did happen there, it’s a start for communities like Grand Rapids and others.” 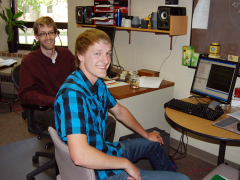