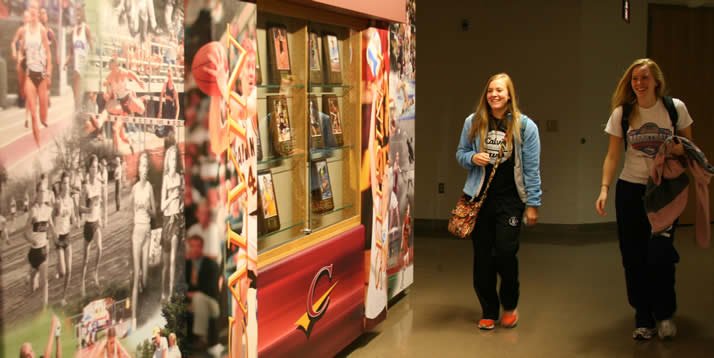 Lining one wall in the basement of the Van Noord Arena are images of Calvin's All-American athletes from every era.

Walk down the Varsity sports locker room hallway in Van Noord Arena, and you won’t only be walking among Calvin’s current athletes, but also among Knight legends of the past.

Lining that hallway are photo montages and framed pictures of Calvin’s All-America athletes from every era. “We had an All-American wall in the Knollcrest Fieldhouse before construction … ,” said men’s athletic director  Jim Timmer, Jr. “When we committed to the new fieldhouse, we wanted to honor those who have had success nationally in some way, and the donors supported the project.”

The wall represents four eras in Calvin sports: the 1950s and ’60s, the 1970s and ’80s, and the 1990s and 2000s. The individual plaques of the honored All-Americans are hung chronologically to represent the eras, and they are divided by pillars covered with duotone print sports collages.

“We wanted the collages to have a nostalgic kind of look,” said Gary Lepsch, the senior designer in Calvin’s communication and marketing department who designed the wall.

Moving down the wall

At one end of the All-American wall is a case containing currently honored All-Americans. As new athletes are honored, they will take the places of past honorees—who will move down the wall. “It's not a Hall of Fame but a way to recognize the past and inspire the future,” Timmer said. “It shows those currently playing sports at Calvin the long tradition of All-Americans at Calvin.”

Calvin’s physical plant staff was responsible for construction of the wall. “We made everything but the actual wallpaper—pillars, boxes, display cases plaques—and fitted it all together,” said Dean Gunnink, that department’s assistant director of design. “I guess the biggest challenge was the coordinated effort … getting something with some pop and interest.”

Lepsch, sports information director Jeff Febus, Timmer and Jim Timmer, Jr.  worked for a year to find the images for the wall. “It was a pretty good team effort,” said Lepsch, who designed the collage. “You have to get the pics, arrange them, then get the composite of how they fit together. It took a lot of air brushing and blending one photo into another.”

He praised those involved, including Gunnink and the physical plant staff as well as facilities manager Justin TeBrake.

“The athletes were first class performers; I wanted to make a first class presentation,” Lepsch said: “It’s an honor to be part of their legacy. I know they’ll be on the wall for a long time.” 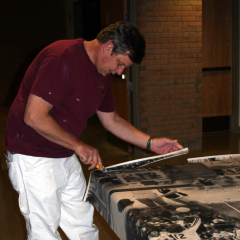 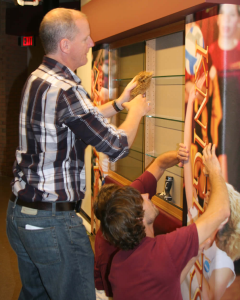