That was fast: lacrosse 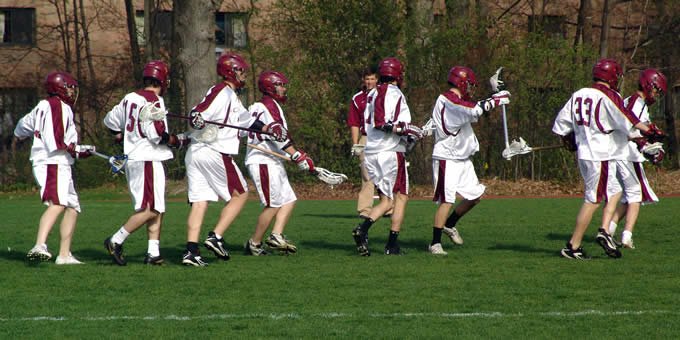 Footwork on the Field
A once-obscure sport is gaining popularity at Calvin.

"Move the ball!” “Look for the open guy!” “Nice shot!” “Great pass!”  The chatter in the stands often sounds familiar—like something you might hear at a basketball, soccer or hockey competition.

But this former sports reporter had never heard “Gotta find the cage!” “Fresh in the crease!” “Goose it out!” at a sports venue before.

Just being a part of the crowd for this sport is exciting; “the fastest game on two feet,” as it is sometimes called, is lacrosse.

Calvin has sported a men’s lacrosse team for more than 20 years. (Calvin also has a women’s lacrosse team.) It was officially recognized as a club sport in 1987, and the Knights have competed with varying degrees of success on the field, including two national tournament runs in 2005 and 2006.

On Monday, the Knights jumped to an early lead over Saginaw Valley, with 6 goals on 28 shots in the first quarter. Eric Kamstra initiated the scoring by scooping a loose ball off the ground, maneuvering around a defender and flinging it into the back of the opponents’ goal, giving Calvin the early 1-0 lead. After much more fast-paced action, the Knights came away with a 16-6 victory, keeping them in the running for a berth in the Men’s Collegiate Lacrosse Association (MCLA) national tournament.

A tournament run would be a fine career ending for Davis Moes, a four-year player for the Knights. Moes, of Grand Rapids, started playing after watching both of his older brothers, Jesse and Ben, play for Calvin.
"It looked really, really fun to play,” said the senior co-captain. “Getting the stick skills down was probably the hardest part, but the rest came more natural. I feel like I’m a pretty natural defender.”

A former golfer for two seasons with the Knights, Moes decided to stick with lacrosse. “I absolutely love the game. I think that if it keeps getting bigger like it has been, within the next ten years it will be one of the top sports in the U.S.”

Lately, following the national trend, lacrosse is gaining in popularity.  A sport I always thought of as an East Coast phenomenon, lacrosse is popping up at local high schools more and more, which is increasing exposure at a younger age.

Sophomore Kenny Lansey, of Wyckoff, N.J., played for his high school team before joining the Knights. "Some high schools out by us don’t even have baseball because everyone is playing lacrosse,” he said.

Sophomore Jordan Mosel, of Chicago, “thought it looked kind of cool,” so he decided to give lacrosse a try. He had no opportunity to play prior to Calvin. “For the first couple of days I was completely lost on why people were doing what they were doing, but it didn’t take too long to catch on,” he said.

Freshman Derek Demann, of Lynden, Wash., learned about the team at one of the Calvin club's meetings. "I like the combination of physical and finesse at the same time,” he said.

Coach Nick Good, a 2006 Calvin lacrosse-playing alumnus, said a mix of experienced and inexperienced players is representative of a typical Knight team: “Usually about half of the guys have played before, and half are new to the sport. When someone comes out and sees it played, I think they get pretty excited about it. It’s the fun of throwing a baseball, played at the speed of soccer, and it’s a contact sport, which adds an extra dimension, too.”

That extra dimension of contact made me wonder, “Do the women play this way, too?  With the same rules?”  Note to self: add a womens’ game to my calendar this spring.

Good is starting to recruit more students to Calvin because of the sport. “I’ve talked to seven or eight kids this year that are thinking of coming to Calvin to play lacrosse,” he said. “We’re a club sport, but we really work hard to make it a full experience for these guys.”

Calvin plays in the most competitive league in the country for club lacrosse and is supported by four additional sponsors who help with team expenses.  “We make it as close to varsity level as we can,” added Good.

The Knights play their last regular season game Friday, April 23, at 5 p.m. at home against Walsh on the soccer/lacrosse field. Come out to see the Knights zing, submarine and buddy pass their way to victory. To understand the lingo, check out the lacrosse dictionary. 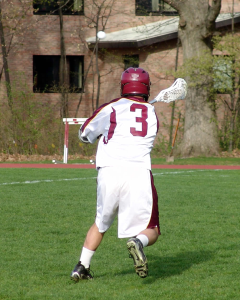