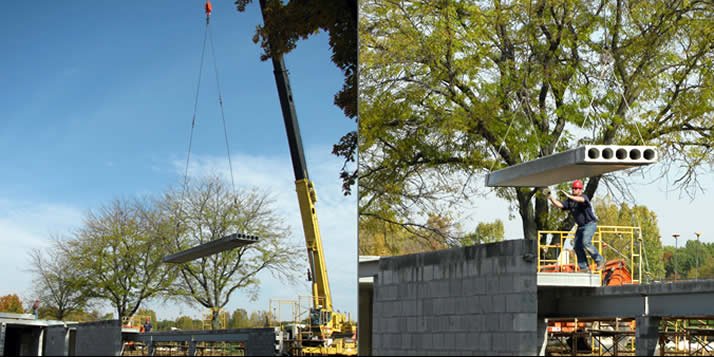 While the Calvin Fine Arts Center is encumbered by scaffolding, and crews construct its new wings, faculty members from the English and music departments have found other places on campus.

The piano in the office on the third floor of Spoelhof Center sits a couple of feet from Norma de Waal Malefyt’s desk. “I’m pretty careful about how I use it because this isn’t the FAC where everybody is playing music,” she said. A piano and organ instructor with the Calvin music department, de Waal Malefyt is using the space until the FAC is completed. "I love this office,” she said. “I’ve never had a window since I came to Calvin.”

While the Calvin Fine Arts Center is encumbered by scaffolding, and crews reconfigure its innards and construct its new wings, faculty members from the English and music departments who formerly called that building home have had to find other places on campus to land: in the Spoelhof Center; in the one-story brown brick building east of the Beltline; commonly known as the “surge building” and even in a residence hall basement.

"It’s not a very cheery place to come down to,” said music professor Keith Brautigam of Timmer Hall’s nether regions, where he and his music department colleagues have offices. The practice rooms located across the hall from Brautigam’s office are former dorm rooms, padded with mattresses to deaden the sound. “For some of our part-time faculty, who teach in there, the heat gets unbearable. It’s not too nice for them,” he said.

The provisional practice spaces also affect the tone produced by various instruments. “Students try to adjust their embouchure and playing to make it better, and it makes for a little tension around here,” Brautigam said. Nevertheless, the exile is bearable, he said. “Once the students are here, and you’re down there making music, it’s fine. But it does make one long for the renovation to be completed.”

That day, when the facility opens—complete with a new gallery and recital hall—is scheduled for the fall of 2010. “The impact of the weather on the construction timeline is always a challenge,” allowed vice president for administration, finance and information services Henry DeVries. The moving of whole departments poses other kinds of challenges, he added: “If you think about music, it’s not only the classrooms and the offices and the stuff—it’s all the performances.”

During the 2009-2010 academic year, Calvin’s numerous band and orchestra concerts and organ, flute, piano, and other recitals, have been moved to performance spaces at Grand Rapids Christian High School and the Ladies Literary Club. “We planned all of last fall where people would go during the diaspora,” DeVries said. “Physical plant did all of the actual moving. They did a great job. Figuratively and literally, they did the heavy lifting.”

Physical plant also handled the exodus of the health, physical education, recreation, dance and sport (HPERDS) department to the surge building, while the Spoelhof Fieldhouse Complex (SFC) was under construction last year. “We had to move javelins and throwing pins and hula hoops and batting cages,” said Natalie Hubers, an administrative assistant in HPERDS. “Just the trophy cases alone was a month-long project—to wrap them, store them and label them so we knew where they were when we came back.”

Hubers said that HPERDS faculty stayed pretty busy going back and forth between the east and main campuses. “Some of them had to cart a lot of gear for classes,” she said. Even given the walking and lugging, the surge building wasn’t a bad place, especially because the HPERDS crew took periodic tours of their news digs. “We could see the building going up. We could see the space we would have,” Hubers said. "So you knew you were going to put up with something not ideal to get something you were supposed to have.” (The HPERDS department moved into the SFC in the winter of last year.)

The English department is currently making its home-away-from-home in "surge," (as it is sometimes abbreviated), and English professor Nancy Hull said that the department has found a home indeed.

"This is the first time in my recollection—and I have been here 25 years as either adjunct or full-time—that we have all been on the same floor,” Hull said. “It just adds to the camaraderie.” The building’s configuration lends itself to entertaining, she said. This past semester, the department hosted a fall picnic for English students. “I know we had 70 people,” said Hull. “We had it all at a big table in the hall.” So successful was the first get-together, the department threw and end-of- semester bash as well.

Even the lengthy walk to teach or attend events on the main campus has made the English gang more sociable, said Hull: “You say, ‘Are you going?’ and we walk over together, and you have the opportunity for conversation,” she said. Things can get a little complicated when she teaches children’s literature, and she has to lug boxes of many little texts over the way: “What it’s done is make me be very deliberate in the way of supplemental material,” Hull said. (And a colleague awaits her on the other side to help her tote her boxes.)

The distance does pose one drawback. “I think our students visits are not what they would be in the FAC,” Hull said. “Students are not dropping by.”

Otherwise, she and her colleagues are enjoying working over-the-way. “I like it over here just fine. It’s going to be hard to move back,” said English professor James Vanden Bosch. “It’s nice and spacious. We get to see more of the outside world.”

And, Hull added, there is a further benefit to working in surge—for her, anyway: “I’m just happy that for 18 months, I have a bigger office than Gary Schmidt.”