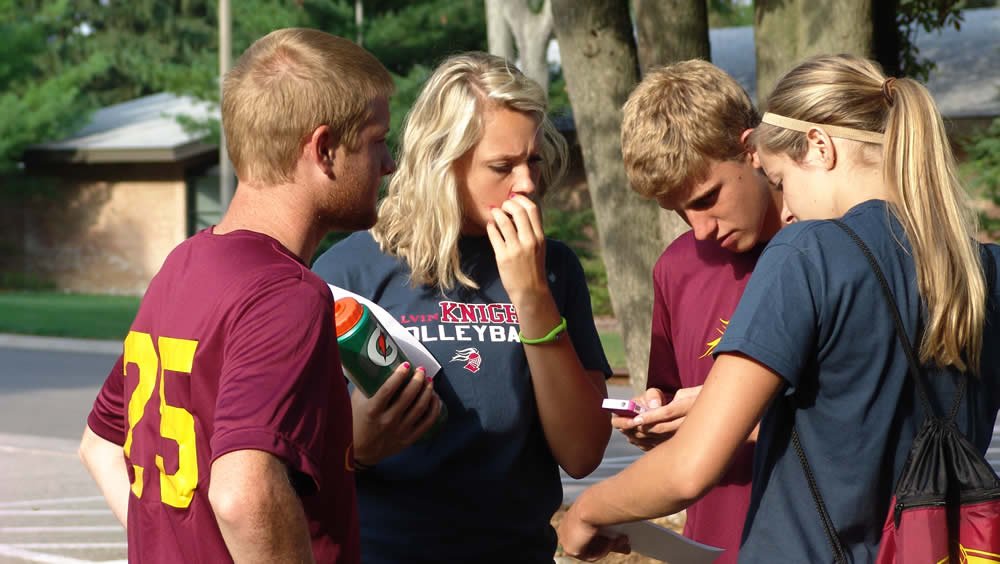 The women's volleyball team and men's soccer team strengthen their bodies and their bond through geocaching.

As a form of team bonding and conditioning, the Calvin women’s volleyball team and men’s soccer team recently joined forces for a day of geocaching on Calvin’s campus.

Geocaching, a recreational activity that began in the early 2000’s, is something of a global treasure hunt, in which seekers are given the longitude and latitude of a hidden item that they can plug into a GPS or iPhone.

For the volleyball and soccer team, these coordinates were limited to locations around campus.

“This is our very first try at this, so if it flops and you end up somewhere you’re not supposed to be, we’re sorry,” said Amber Warners, coach of the Calvin women’s volleyball team, after explaining the rules.

For the past few years, the teams have participated in an Amazing Race-style event, but this summer, coach Warners and coach Souders (the men’s soccer coach) decided to try something new. They split each team into blended groups of five or six, then gave them a sheet with 11 different coordinates for boxes that had been hidden around campus. Inside the boxes were beads, which the groups would take to prove they’d found the box. Then they’d leave something in its place, such as a Bible verse, an encouraging quote, a picture or even a team joke.

“They’re putting pictures of our lives in there,” Warners said to Souders as she looked through the items the players had brought to leave in the boxes, “Here’s a picture of you… and that’s my dog.”

After their tokens had been left, the players ran to find the next box, and did this until all 11 beads had been collected.

At the start of the event, the groups struggled to understand the technology. One volleyball player even asked, “Is part of the race figuring out the app?” But eventually the groups dispersed, and began checking through shrubs and beneath rocks for the “treasure,” occasionally stopping to stare at their iPhones in confusion.

As they searched, the bond that had formed between the two teams was evident. At one point, juniors Kristi Zietse and Zach Willis, who previously participated in the Amazing Race, playfully argued about who won which year.

At noon, the athletes regrouped in the Spoelhof Fieldhouse Complex to share a meal, recount experiences, and claim their prizes.

“We’ll do it again,” said Warners, who plans to leave the boxes in their locations for other teams to use throughout the year, “It was a great way for the athletes to interact with other Calvin athletes not on their team and a fun way to do physical conditioning!” 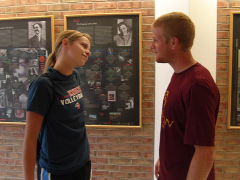 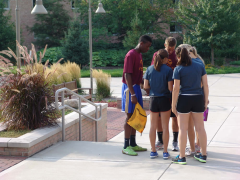