Teaching the literacies in local schools 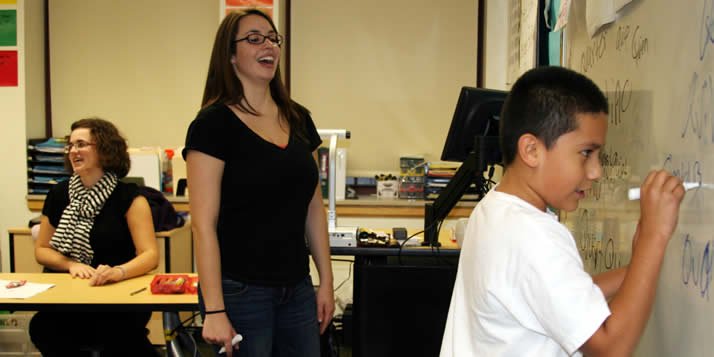 First came “Duck, Duck Goose,” then “Poison Dart Frog.” Next up was a relay game that had teams of kids racing to write the most words on the board in either English or Spanish. As the board filled with words—“dog,” “braid,” “net,” “qualm.” “basalt,” “nativity”—The kids, all 6th graders at Burton Middle School, were cheering on their teammates and yelling out words to use: “Q’doba, dude! Q’doba, dude!” yelled one. “How do you spell it?” his teammate called back. The final game of the day required the kids each to write a sentence on a paper, fold it so only the last sentence written was visible, and pass it around the table.

“Use this time to think of a really awesome sentence,” counseled Calvin senior Liz Steele, as the children wrote quietly.

“And make sure you’re writing complete sentences too,” added Calvin senior Andrea Campo. The resulting “essays” praised the glories of soccer, kittens, bunnies and the Twilight series, and the kids laughed as they were read aloud.

Steele and Campo, both secondary education majors, were coordinating the games at Burton Middle School as a requirement for their education 307 class, “Reading/Literacy in the Content Area.” Students in the class, taught by education professor Ron Sjoerdsma, teach after-school literacy labs Monday through Friday at Burton school and Martin Luther King Leadership Academy. The labs are part of the after-school programs sponsored at those two schools by Campfire USA.

His students teach reading and writing, Sjoerdsma said, but they also teach the other four competencies that make up literary literacy: Listening, speaking, observing and representing. Because secondary education students come from a range of majors—English, Spanish, French, history, art, math, music, communication arts and sciences and kinesiology—Sjoerdsma’s students can teach a range of literacies in a range of ways: anything from reading to drawing to making musical instruments.

“These are students who are six to 12 months away from their first teaching jobs,” Sjoerdsma said, “so I give them a lot of independence, and they tend to be extremely creative planners.”

For Steele, an English major with an ESL minor and Campo, a Spanish major, games involving words have been the key. Campo thought the spelling relay was particularly effective. “It was a way to get them on their feet. You’d think of a word, and a lightbulb would go on,” she said. “And it was a way to incorporate Spanish, which is always a challenge. On any given day, several of the students speak Spanish, but we never know how many.” she said.

The fluctuating size of the group was major challenge, Campo admitted: “One of the weeks, it all went downhill, and we were a little apprehensive … We weren’t prepared to have 25 to 30 rowdy kids.”

The experience taught the students about the importance of flexibility, “starting out with a key idea and making sure that idea was reached even if the process was different than we’d planned,” Campo said. Teaching the literacy lab also demonstrated the importance of relationship-building to teaching, she added: “We concentrated on getting to know the kids.”

Calvin’s education major has always required a literacy lab, and this is the second year the department has collaborated with campfire USA., Sjoerdsma said it’s been a revitalizing experience for many of his students: “It’s been quite a valuable experience for them to engage with kids from an urban school that’s quite different than where they’re come from … I’m sure there are frustrations when they feel like they can’t get through and kids won’t connect, but it’s a learning process,” he said. “That’s the great thing about the teaching profession. It’s a learning experience.” 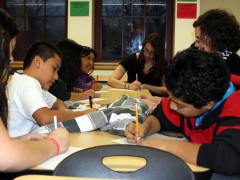