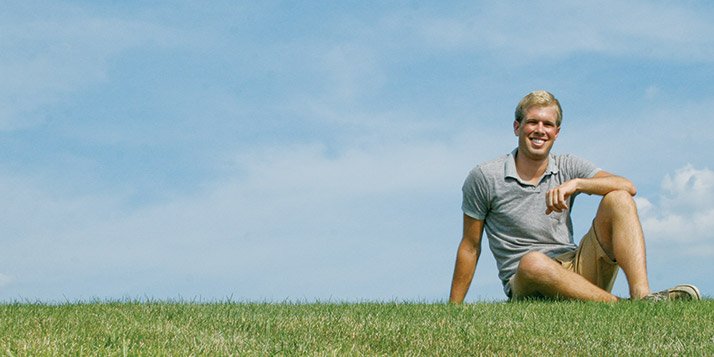 2012 grad Andrew Knot will teach in the town of Linz, funded by the Austrian Federal Ministry for Education, Arts and Culture.

Andrew Knot is looking forward to seeing Austria again. “The geography alone is beautiful,” he said. “The drive from Vienna on the east side of Munich is one of the most beautiful stretches of land on earth.”

Knot, a 2012 Calvin graduate, who majored in English with honors and German, will be studying in Linz, Austria. via a Teaching Assistantship funded by the Austrian Federal Ministry for Education, Arts and Culture. The award, while not a Fulbright Grant, is administrated by the Austrian-American Educational Commission (Fulbright Commission). Knot will teach English in a secondary classroom. “The goal is to teach various subjects in English,” he said. “I think they really recognize the value of a native speaker.”  ( Austria's main langauge is German.)

Knot developed a liking for Europe during his sophomore year at Calvin, when he participated in a January interim in Schwäbisch Hall, a town founded in the middle ages and located about an hour outside Stuttgart, Germany. “I would get up every day and walk out to Westbahnhof, the train station, and this entire city, with cobbled streets and street vendors, was at my disposal,” he said. “I grew to love that culture and language and people in a way that I never thought I would."

Knot also loved Austria, both for its sceneery and its central location in Europe: "It’s located close to France, Germany, the Czech Republic," he said.

Knot was born in Waltham, Mass., and grew up in Flossmoor, Ill. He is a graduate of Illiana Christian High School, where he found himself drawn to German and writing. Knot began attending Calvin in 2008. “I kind of rose up through the Dutch pipeline from Illiana to Grand Rapids,” he joked.

At Calvin, Knot combined a writing minor with his German and English majors, and he worked as a student assistant for Calvin sports information director Jeff Febus—writing stories and broadcasting about Calvin’s various teams and athletes. “I really couldn’t ask for a greater experience than working for Jeff,” said Knot, who, last year, won the MIAA’s Robin Hartman Writing Award. His entry was a story about volleyball coach Amber Warners and her team winning the championship game that had eluded her 20 years ago, when she was the setter on the Calvin team. “Those are the ones you don’t want to mess up,” he commented.

For his honors thesis in English, Knot wrote a series of short stories about his brother David, who has autism. “What he did was to integrate the stories of his brother with a medical explanation of what was going on in his brother’s body,” said English professor Gary Schmidt, who served as Knot’s thesis advisor. Schmidt described Knot as a “sensitive and beautiful writer with a deep understanding of how narrative can convey truth … This is a guy whose deep sense of devotion, deep sense of his calling as a Christian writer, comes through in his writing,” Schmidt said. “When he sees his own writing, he sees it in terms of service.”

A reader of the The New Yorker and Atlantic magazine, Knot is a self-confessed fan of long-form journalism—which he doesn’t believe is entirely extinct on the Web: “You’re seeing a bit of resurgence,”  he claimed. “There are people doing some good things—especially in the realm of sports and culture.” Knot one day hopes to work among them.

Right now, He hopes to be of real service in Linz. “You graduate with two degrees in the humanities, and it’s easy to lack a specific calling,” Knot said. “But I was pretty sure that this was an opportunity that was unique for me and one that I could contribute to in a special way.”