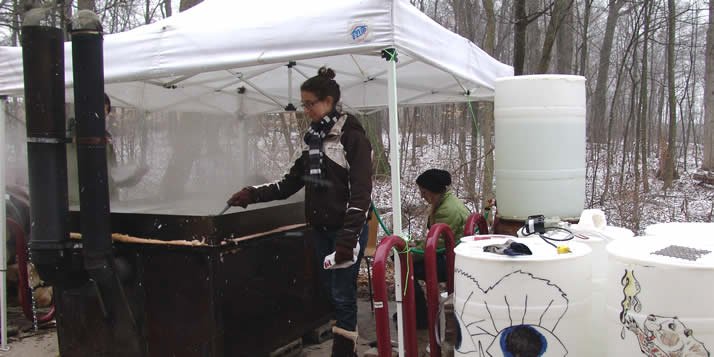 Environmental studies professor James Skillen is no stranger to syrup.

Environmental studies professor James Skillen is no stranger to maple syrup. When Skillen attended Cornell University in New York from 2001 to 2006, he took part in their Sugar Maple Research and Extension Program. The program harvested sap from the trees on campus, and made it into maple syrup and sold it. Since leaving Cornell, Skillen has continued making maple syrup for his family, using the trees in his backyard.

A few months ago when Skillen was looking at Calvin’s newly-made tree map, an online project of several biology students, he realized the map showed the location of every sugar maple tree on campus and “a light bulb went off” he said. To make his own maple syrup from Calvin’s maples, Skillen would only need a few more things: an evaporator to boil the sap, the buckets and tubes to tap the trees and a group of students to help with all the work. As one of their faculty mentors, Skillen immediately thought of the outdoor-recreation/care-creation floor in Van Reken residential hall: “I thought it was a perfect project for the floor because it brought those two factors together, the physical labor that comes with collecting the sap and boiling it, and the ideal of sustainable living.”

“Sap can be collected from all the different types of maple trees, but sugar maples have the highest concentration of sugar, meaning you get the most amount of syrup from sap,” said Skillen. “February and March are the best times to harvest sap because of the weather conditions.” Over the winter months, the trees build up their supply of sap, but it is not until conditions warm during the day that the sap begins moving within the tree at a faster speed, allowing the sap to be collected more quickly.

However, by the time Skillen had the idea, winter was well under way and he knew he would have to work fast in order to make it happen this year. Freshman Ian Noyes from Beaver Falls, Pennsylvania, one of the students living on the care creation floor, remembers, “I thought that this was something that would take a year to plan out and wouldn't come around until the 2012-2013 academic year, but when I returned from break he had already been taught to weld by Phil Jasperse from the engineering department and had thrown together an evaporator to boil the water out of maple sap.”

For Noyes, “This project really matches the ideal of cultivation, which I believe is essential to the creation-care/outdoor-recreation floor.” The students from Van Reken tapped the sugar maples, with each member being assigned to a few trees. As they collected the sap, the students began running the evaporator every weekend, boiling the water out of the sap to make the maple syrup.

With such a project, there were some bumps that needed to be smoothed out along the way. “With this strange weather we’ve been having with the varying temperatures, the trees were confused as well, causing them to produce less sap. It’s been a pretty bad harvesting season this year, not just for us, but all over the country.” Skillen shared. “Also, there was one mishap with the evaporator where not enough of the smoke was being channeled away, and we ended up with a batch of syrup that had a distinctly smoky flavor. Instead of throwing it away and wasting the many hours that went into it, we decided we would just label that batch as special for barbequing.”

Despite these hindrances, the students have enjoyed their time on the project and learned some important lessons: “This project has taught me how far removed we are from the processes of how we get our food,” said Noyes. “Some students didn't even know syrup came from trees, albeit the syrup you buy in stores is just another form of corn. Also, I've really come to appreciate the pride you get from seeing a product from start to finish.”

Both Skillen and Noyes said that they want this project to become a yearly tradition at Calvin. This year they are giving away some of the maple syrup to Evergreen Christian Elementary School for a pancake breakfast. Skillen hopes to work more with the elementary school in future years, as he teaches the school how to make syrup using their maple trees. The rest of the Calvin syrup will be given away to those willing to donate. However, Skillen said, “One day, I’d like to sell the maple syrup in the school store. How cool would it be for family members to receive maple syrup made here on campus?” 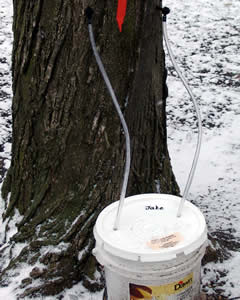 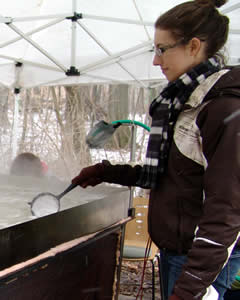 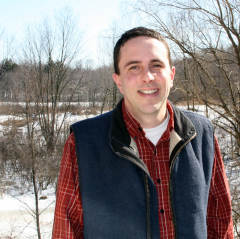