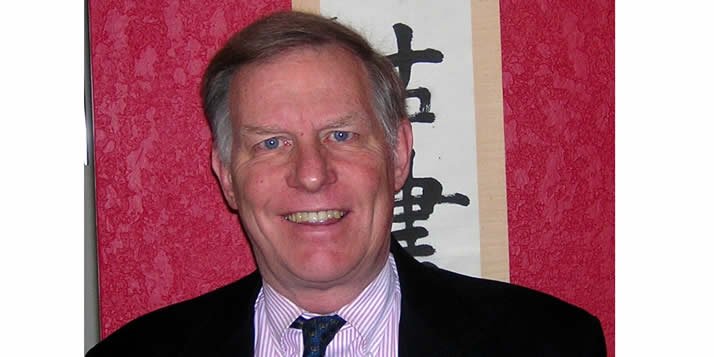 Author and journalist T.R. Reid opened the January Series Wednesday, January 6, 2010 with a discussion about health care in the United States.

In "The Healing of America: A Global Quest for Better, Cheaper and Fairer Health Care," Reid shared insights learned from his travels to a wide range of countries, from Canada and Great Britain to India and Japan.

Using a sore shoulder to get himself in to doctors' offices, hospitals and even an Ayurvedic healing center in India, Reid investigated each country's health care system first hand. He probed government officials, doctors and health care consumers to find out how each system works (or doesn't work). He also studied how each industrialized nation managed to provide all its citizens (and even visitors, like Reid) with health care.

Reid said that this multi-model approach to health care creates huge inefficiencies that make the system difficult to fix. It's also far more expensive; countries that use one approach are able to provide health care to all because administrative costs are so much lower. The multi-model approach, said Reid, stifles incentive within systems, or individual insurance companies, to focus on cost-saving preventative health measures; people are seldom insured by the same company or organization long enough for preventative health measures to be profitable.

Approximately 22,000 people die in the United States each year from treatable diseases because they lack health insurance, Reid said, adding that these people are seldom the poorest citizens who have access to free clinics and other programs, but rather the working poor unable to afford insurance premiums. Additionally, some studies suggest that between 700,000 and 800,000 people each year face bankruptcy because they are unable to pay medical bills, Reid said.

This creates a moral dilemma, Reid said, for the world's richest nation.

In the end, Reid said that that the health care bills currently passing through Congress don't do enough to fix the expensive, inefficient multi-model approach to health care in the United States. A switch to a single-model system is what is needed to ensure that all receive the health care they need.

"If we can find the political will to provide universal health coverage, the other rich countries can show us the way," he said.

Listen to T.R. Reid speaking about health care on NPR.

Check out news, stories, videos and blogs from interim at Calvin.