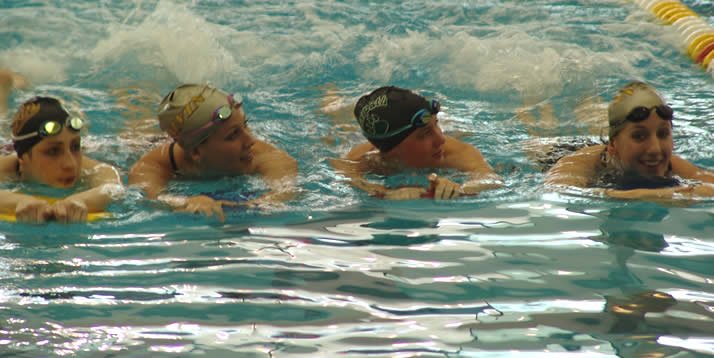 At approximately 3:31 p.m. on Wednesday, Jan. 14, members of the Calvin swimming and diving team took their first leaps into the 50-meter pool housed in the Venema Aquatic Center. Following the ceremonial leap, team members commenced their first practice in the new pool, swimming in pairs up and down the 25-yard lanes that stretched along its width.

“It feels so good!” yelled one of the women as she swam.

The Calvin swimmers and divers have been exiled from campus since the former pool in the Bergsma Natatorium was closed and demolished in the summer of 2007. Until the new pool and aquatic center, named for lead donor Thelma Venema, was built, the team has been training in the pool at East Grand Rapids High School.

“It’s kind of weird. I envisioned this first day having this aura about it, and it ended up that I’m just glad to get in here,” he said as he watched the swimmers. “This is awesome. It’s just awesome.”

Training off-campus has not been ideal for building a team dynamic, Gelderloos said. “The hard part about it is … you’re always in a rush to get to a pool. As a team you need those extra minutes in the locker room before and after practice.”

A place of their own

Jon Herrema, a junior business major and butterfly and backstroke specialist on the team, agreed that the team’s temporary aquatic quarters, while good, were not ideal: “It’s nice to have our own place and not have to take equipment back and forth,” he said.

However, the long time away from Calvin’s facilities has not hurt the team’s performance, Gelderloos emphasized: “They’re fine. But this,” he said of the new pool, “will only make things better.”

Allison Rober paused in her swimming to talk about the new pool. “I have been so impressed with everything,” said the senior exercise science major, who specializes in the 200-meter and the 400-meter individual medleys. The team, she said, has pre-viewed the pool at different stages of its construction.

“It’s nice to see the technology and the effort and all of the work come into play—come to life. It's so nice,“ she said, surveying her teammates churning through the water, “to be home.” 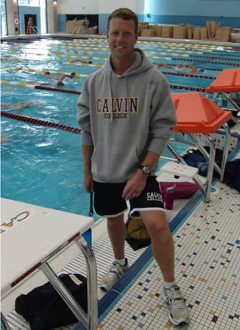