Studying the Olympics in England 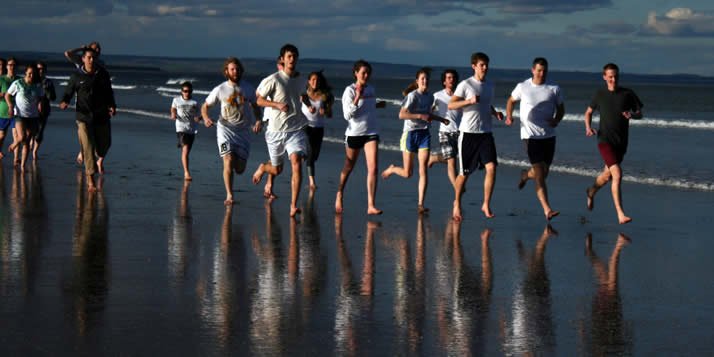 Students got to research the Olympics up close and personal on a Calvin semester abroad in England.

This spring, 28 Calvin College students had a chance to get a first-hand look at the preparation for the Summer Olympics in London. The students spent the recent spring semester studying in England at York St. John University as part of the semester in Britain program led by Calvin kinesiology professor Dr. Brian Bolt.

"We looked at the Olympic Games in three parts,” said Bolt. “The first section involved studying the ancient Olympic games in Greece and how it served as a cultural festival. The second section involved studying the birth of the modern Olympic games in 1896 and the London-based Wenlock Society that was the forerunner of the (modern) games. The final section included the study of this year’s Summer Olympics in London.”

In class and out

The semester included a pair of classes taught by Bolt. The first course, titled “Life in Sport in Britain, Past and Present,” used the city of York and sport to explore the history of Britain, dating back to the Roman period through the modern day. The second course, “Faster, Higher, Stronger: The Business and Ethics of Sport” included an intense study of the ancient and modern Olympic games.

The students also studied the economics of the Olympics—including England’s bid process to host the games and the economic impact of the event on the United Kingdom: particularly the regeneration of the east side of London.

Sophomore Kyle Erffmeyer of Grand Rapids wrote his final class paper on the economic impact of the games: “I definitely think the Olympics are giving the country an economic boost,” he said. “There are millions of dollars coming into the country through the games and England has also been very wise with the way it has constructed and used existing facilities for competition venues to keep costs down.”

One venue being used for Olympic soccer matches is the storied pitch of Old Trafford Stadium, home of Manchester United, the legendary English Premier League club. The Calvin contingent had a chance to attend an EPL game hosted by Manchester United and came away impressed. “Old Trafford is like the Yankee Stadium of professional soccer in England,” said Calvin sophomore Jordan Brink of Dyer, Indiana. “It was incredible to see an historic stadium like that and also know that Olympic soccer games would be played there this summer.”

Another storied venue that the group visited was the Wimbledon Tennis Courts which is doing triple duty this summer—hosting not only its own Wimbledon Tennis Championships, but also the men’s and women’s Olympic tennis competition.

The students also viewed the Olympic Velodrome, the Olympic Aquatic Center and the Olympic Track and Field Stadium during a two-hour walking tour of London.

”My favorite part about learning the history of the Olympics was seeing London first hand,” said Brink. “Being able to spend time in the host city really gave me a perspective that many do not have. Watching the opening ceremony and the Olympic coverage has been so much more exciting, knowing I have experienced part of the culture surrounding the games.”

The group’s home base at York St. John University was located roughly two hours by train northeast of London. While attending classes at York St. John, Bolt arranged for every student to participate on one of the University’s club sports teams. Some students played cricket, others played basketball, tennis or a variety of other sports.

“The goal was to immerse our students into how another country views sport,” said Bolt. “I think our students found the experience of playing on a club team with English students to be very enriching and rewarding.”

Junior Jon Breems of Moreno Valley, California, agreed. “Seeing and interacting with a different culture was great,” said Breems. “Not everyone in this world lives exactly like we do. The minute you step outside of your own culture, even to a place as similar as England, you get a different perspective on everything. That’s something you can’t fully experience in a classroom. A textbook can only teach you so much.”

The trip overseas was the first for Bolt as a professor and from his vantage point, the semester was a success. “I thought the buy-in with our (Calvin) students was very high,” said Bolt. “My sense was that our students loved their experience.”

Erffmeyer was one of those students. “It was a great semester, one I’ll never forget,” said Erffmeyer. “To get a chance to experience a different country while it was in the middle of getting ready to host the Olympic Games was eye-opening. I’m definitely watching the Olympics this summer through a different lens.”

Now that the Olympic games are in full swing, the student group is watching with a keen interest: "It was really cool to watch the U.S. women's soccer team play North Korea the other day at Old Trafford Stadium," said Brink. "It gave me an extra appreciation for what the U.S. team was experiencing playing on that field because I had been to a game at that stadium and knew how awe-inspiring the atmosphere is inside." 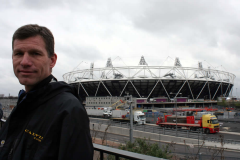 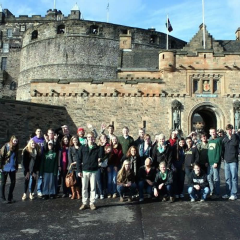