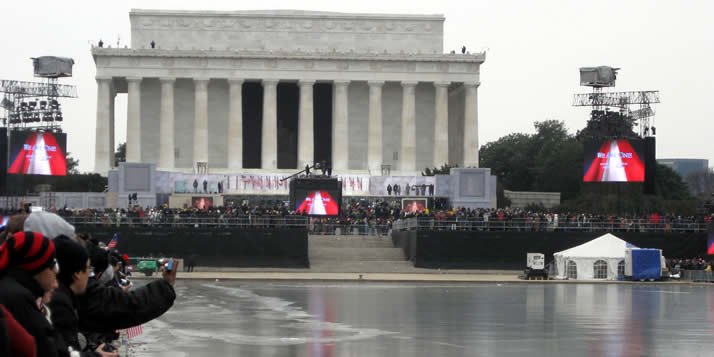 Over 100 Calvin students, faculty and staff gathered in the Commons Lecture Hall on Tuesday morning to watch the historic inauguration of the 44th president of the United States, Barack Obama.

Over 100 Calvin students, faculty and staff took a break to gather in the Commons Lecture Hall at 11 a.m. on Tuesday morning to watch the historic inauguration of the 44th president of the United States, Barack Obama. The Calvin audience watched history unfold on a sizeable projector screen; latecomers shuffled into the lecture hall and stood because there were few chairs to spare.

The inauguration watch event was hosted by the Multicultural Student Development Office, and Creative Dining Services provided punch and snacks.

The audience cheered and applauded along with an estimated crowd of one million in Washington. Senior Joey Breems explained that future generations will likely be envious that we got to see this happen live: “It’s a day that tells us that we don’t have to be trapped in history. … We’ve arrived; our generation can move forward.”