Students engage in research about the natural world 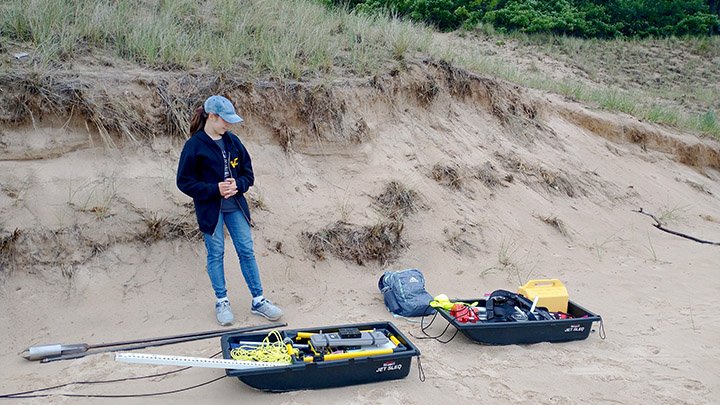 Each year, more than 130 Calvin University students majoring in the sciences collaborate with their professors on research projects, working toward solutions for a wide range of real-world problems. The students spotlighted below are using their research to explore various aspects of God’s creation.

Physics major Lauren Henderson ’22 has been studying contact binaries for three summers with professor Larry Molnar and a group of other Calvin students. Contact binaries are two stars that are so close in space that they are touching. According to Henderson, there was not “a published and cohesive model for how these stars change over time,” so the team developed their own theoretical model of contact binary evolution.

One exciting outcome of that effort was to discover a new instability that occurs when the companion star is nearly as massive as the primary star. In such cases material should rapidly flow to the primary until the companion is sufficiently small. The research team was able to test this new idea immediately by comparing their theory against compact binary data from the Kepler spacecraft. As expected, they found a distinct lack of systems with massive companions.

After devoting so much time to this project, Henderson realizes how much it has shaped her both as an individual and as a future astronomer—she will apply to graduate school in astronomy this fall.

“Even though I've only studied contact binary stars in depth, I've learned about a wide variety of astrophysics research techniques,” she said. “On a more personal level, I have also learned about the process of science and how to handle the challenges that accompany any scientific research. We've had to troubleshoot both bugs on the telescope and bugs in our code plenty of times. My research at Calvin has also helped me grow in my confidence as a scientist.”

Henderson encourages others to cultivate a curious spirit and a willingness to keep seeking new knowledge. She sees it as a form of worship.

“There is intrinsic value in learning about the world around us,” she said. “I think astronomy is a wonderful way to connect people with the wonder of God's creation. Studying contact binary stars is a way we can glorify God.”

Chemistry professor Mark Muyskens finds the fluorescence of natural compounds fascinating—he’s been doing research in the field for his entire Calvin career. His student researchers have had numerous opportunities to build upon his prior work.

This year, four of Muyskens’ students investigated a set of compounds called coumarins. They looked at two coumarins in particular: aesculetin, which comes from the horse chestnut tree, and grevillone, which comes from the Australian silky oak. The team wanted to figure out how subtle differences in the structures of these coumarins contribute to a pronounced difference in their fluorescence—the color and brightness of their glows. The researchers found that placing the coumarins in different liquids can have a notable impact on their fluorescence as well. Their findings on aesculetin were recently accepted for publication.

After synthesizing a variation of aesculetin, the group obtained a new, highly fluorescent coumarin that hasn’t been described before in scientific literature. The group informally named the coumarin HAMC, after the initials of its components. They are also planning to study HAMC for its fluorescence properties.

“I like the computational stuff because you're very in control of what goes on there, and you get pretty fast results,” he said.

Du Laney values his time spent researching as well. “Unlike an in-class lecture, you gain a depth and quality of knowledge in a very specific area,” he said, “which gives you an edge.”

Geology professor Melinda Higley and two students, geology majors Onyinyechi Iheme ’23 and Caitlyn Bolt ’22, spent their summer investigating stratigraphy (the layers of sediments) on the shoreline of Lake Michigan using Ground Penetrating Radar (GPR). They attempted to discover the environmental record that is preserved within the data they collected. Bolt inspected the dunes while Iheme inspected the bluffs. They both enjoyed being out in the field collecting the data.

“I feel like we've accomplished something,” Iheme said. “That has been fun—putting what we learn in class to work. It’s different than when you're learning it on a smart board. It’s amazing.”

Bolt’s dune stratigraphy was defined and clear to see. The bluff stratigraphy, on the other hand, was less homogenous and more mixed, according to Iheme. That’s because the bluffs are failing—they erode and then they collapse.

“We actually went to a site the other day where somebody had to physically move their home back a couple hundred feet away from the bluff,” Higley said.

Iheme reflected on some of the larger impacts of that sediment failure.

“You can see the way the land is reacting to the lake. And if we don't find a way to resolve it, the lake levels will keep rising, and then we're going to lose more and more land, which is millions and millions of dollars of infrastructure. And we'll close down parks and beaches just to try and fix it,” she said.

Even though the researchers originally pursued knowledge about dune sediments for its own sake, they realize that their work is important on an environmental level as well.

“We're trying to help and we're trying to be a part of that conversation,” Higley said. “We're making direct measurements on these features to try to contribute to the scientific perspective on preservation and the realities around coastal management solutions.”

To learn more about scientific research at Calvin, visit calvin.edu/academics/stem-division/.