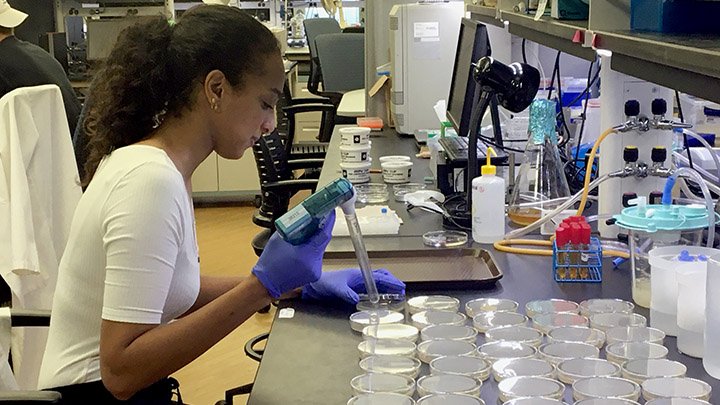 Each year, more than 130 Calvin University students majoring in the sciences collaborate with their professors on research projects, working toward solutions for a wide range of real-world problems. The students spotlighted below are using their research to investigate various health issues.

Nine students are currently researching mutations to a protein that cause several rare diseases, including GRACILE syndrome and Björnstad syndrome. These students are led by professors Rachael Baker (chemistry and biochemistry) and Amy Wilstermann (biology), who together started the project five years ago.

“Rare diseases are really an area of unmet need,” Baker said. “It's not always the most exciting thing that the biggest lab is going to pick, but at a smaller place like Calvin, we get  to pay attention to the smaller projects. We have relationships with families who have been affected by rare diseases. Students get to meet those families, and get a sense of the value of what they're doing.”

Students themselves also report experiencing personal growth throughout the research process, including resilience and persistence through problem solving, teamwork skills, and knowledge about where God is calling them.

Isabel Johnson ’21, a recent graduate and Beckman scholar who has worked on this research since the summer of 2019, says that she has learned to embrace the troubleshooting process involved in research.

“Either the experiment goes wrong,” Johnson said, “or you don't get what you expect to get. And that's where things get really interesting. When it doesn't work, I want it to work. I like trying to figure out how I can tell what's not working and make it work.”

Daniel Sculley ’22, a biochemistry and psychology double major on the pre-med track, says that his favorite part about the research is how the students work together. “I didn't realize that science is not done individually; it is very much done in teams,” he explained. “And you're almost always doing things in an interdependent fashion where your task directly feeds into someone else's task. And you teach each other throughout.”

Biology major Emma Pastoor ’24, found that participating in research helped her find a career path. “I'm hoping to be a medical geneticist,” she said. “It's made me realize more that I do love genetics, and that I'd maybe want to do some research alongside my work as a geneticist.”

In January, the National Science Foundation (NSF) awarded chemistry and biochemistry professor Laura Westrate $350,000 to study protein transport in the endoplasmic reticulum. Westrate notes the research is important because disruptions to this process can be detrimental to people’s health.

“Our cells have to make millions and millions of proteins, and these proteins have to get delivered to specific areas in order for the cell to maintain life and function,” Westrate said. “And so when you start to disrupt the ability for proteins to traffic through the cell, you start to wreak havoc on various aspects of cell biology. There are a lot of diseases that have been linked to that—neurodegenerative diseases, diabetes, and cancer.”

Westrate currently has four students working on projects related to the NSF grant. Their team has experienced the real world challenges of research—at first having difficulty getting good DNA yields and determining the experimental conditions required to view the endoplasmic reticulum on the microscope.

“When I interviewed students for the lab, one of the things I asked them is how they deal with challenges,” Westrate said.

Pressing through the challenges, Westrate's lab group was able to accomplish significant milestones by the end of their 10-week research period.

“The excitement in the microscope room when the students were able to see the endoplasmic reticulum in living cells was palpable,” Westrate said. “They had finally optimized the correct experimental conditions and were ecstatic to see all of that hard work come to fruition.”

Looking back on the research so far, biochemistry major Eyram Adjei ’22 said she felt fulfilled.

“Several projects were successful. We were able to image the ER in live cells on the microscope after optimizing our transfections,” Adjei said. “I gained the skills needed to thoroughly understand relevant research articles in this field and connect them to areas of commonality in our research project."

During the January interim, biology and public health professor Kelly Dubois selected biology major and recent graduate Ryan German ’20 for a short-term research project for Sawyer, a company that manufactures outdoor products such as sunscreen, insect repellant, and water filters. Calvin has a relationship with Sawyer through the Clean Water Institute.

German said that his assigned task involved testing some of their water filters to see if they were still just as effective after an extended period of use, once they had become clogged with bacteria and plaque and sediment. German needed to verify if it would be possible to use dirty water to backwash and get rid of the build-up of filth. German said he found the experience meaningful, partially due to his upbringing in Chiang Mai, Thailand. The tap water he had access to was not safe to drink, he said, so his family used a community water filter.

“Both of my parents work for a nonprofit in Southeast Asia that distributes water filters to rural communities that don't have access to clean water,” he said. “Hearing some of their experiences, it was really cool to be a part of the same effort and movement, because clean water is such an essential need. I could definitely see in the community around me how access to clean water would change people's lives, because you don't have to spend quite as much time being sick, or you don't lose as many children to disease. It really revitalizes the community to have clean water.”

The Clean Water Institute’s partnership with Sawyer “works on a number of levels,” according to its director, chemistry professor Douglas Vander Griend. Calvin does research for their water filters, and Sawyer supports various educational opportunities for Calvin students, such as German’s water filter project. [Text Wrapping Break][Text Wrapping Break]The Clean Water Institute partners in many other projects and research as well. This summer, chemical engineering major Carly Bogdajewicz ’22 and civil engineering major Derek Ten Pas ’22 took part in water disinfection research in Ecuador. They worked with Calvin engineering professors and an Ecuadorian organization called CODEINSE. Bogdajewicz tested different electrolysis systems while Ten Pas tested a new method of spring capture developed by CODEINSE. They not only learned about their respective fields, they also learned how to navigate a different culture.

“Power structures and things like that are all different in different cultures, and even how you accept or assign blame to people who do something wrong, is different. So it was a good experience, being put in a place where you have to be thinking about that,” Ten Pas said.

“Values of hygiene are very different,” Bogdajewicz added. “A lot of times people don't like chlorine because it tastes bad—even though it's good for you—so they lower the chlorine. Very interesting stuff you wouldn't think about just doing science research.”

Oula Salih ’23, a biology major and biochemistry minor on the pre-med track, spent her summer taking water samples at Plaster Creek and looking at the phage levels within the samples. The research was designed to see if the floodplain that was installed a few years ago is having an effect on the water flow rate, which in turn can contribute to water quality.

By comparing phage levels between two sites, Salih discovered that the floodplain does seem to reduce water contamination in Plaster Creek at its Shadyside Park section in Caledonia, Michigan. But arriving at this conclusion wasn’t easy. It involved lots of late nights and some mistakes along the way. Nevertheless, Salih cherishes the experience.

“You become a better person, a better student, and a better researcher. That's the big takeaway,” she said.

But, as a Caledonia native, her work at Plaster Creek is also about serving the health needs of her own community.

“Plaster Creek is one of the most contaminated waterways in West Michigan,” she said. “When I go there to sample, I see children running in the water; I see adults putting their feet in. It's so contaminated that it is very unhealthy to put your body in there.”

Throughout this experience, Salih has come to expand her understanding of how humans and the environment are intertwined—a concept she first learned in her classes at Calvin.

“You have soil erosion and salt on the roads when it's winter, and that all falls into the creek. It's affecting the environment in a terrible way which then also has an effect on humans,” she said. “The environment, the animals, and humans all are affected by one another. What's important is to protect the environment and to help mankind prevent negative health effects.”

To learn more about scientific research at Calvin, visit calvin.edu/academics/stem-division/.