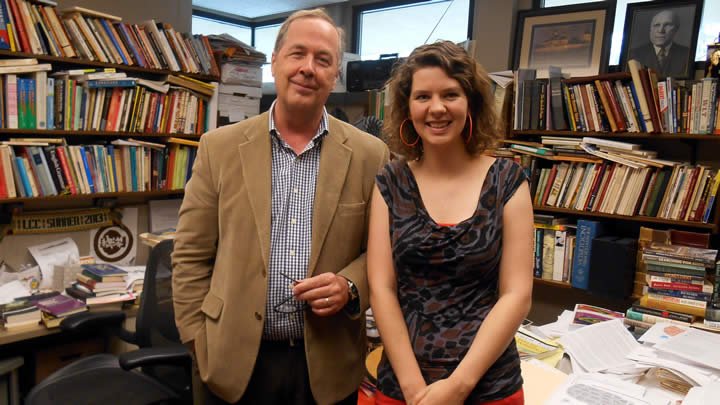 Comparing the top-ten song charts in Turkey and the United States is not exactly a run-of-the-mill subject for a sociolinguistics research paper. But it made an ideal topic for someone who is fluent in English and Turkish—and grew up in Turkey for 17 years before moving to the U.S. for her senior year of high school.

Maria Cupery, a junior at Calvin pursuing a linguistics major and a Spanish minor, is a native of Istanbul, Turkey, where she was raised by her parents, who teach English as a second language. She decided to compare Turkish and American top-ten pop songs for her honors research paper in sociolinguistics, which she took last semester with her adviser, English professor James Vanden Bosch. He says Cupery’s project was not a conventional or predictable undertaking.

“For one thing I can’t read any of the stuff in Turkish,” Vanden Bosch quipped, “so I have to just take her word for what those things mean. She translated [words] into English for the uninitiated on the paper as well. What’s unusual about it is that here’s a student at Calvin, who has enough knowledge of Turkish culture and the Turkish language—and of Turkish popular culture—that she can fruitfully compare these things side-by-side, and make useful comparisons.”

Cupery’s unique combination of dual language skills and cultural familiarity put her in an apt place to embark on this research project, Vanden Bosch said.

“[Even if] I learned enough Turkish to do this project,” he said, “I still wouldn’t know the language deeply, I wouldn’t know the culture deeply, I wouldn’t really have an idea if what we see in this top ten [chart] is something that’s really unusual and not like anything else that had come before, or if this is part of a long tradition in Turkish culture, [but] she has all that knowledge to put into play.”

After reading a first draft of the essay, Vanden Bosch had urged Cupery to submit her paper for consideration at a biennial linguistics and literature conference at Gordon College, an evangelical Christian college in Massachusetts, of which author and Calvin English professor Gary Schmidt is an alumnus.

“It was such a fascinating paper in the first draft that she gave me,” Vanden Bosch said, “that I immediately also suggested to her that she send away for the possible inclusion of her paper on a conference on linguistics and literature at Gordon College. And I told her, ‘unless I’m badly mistaken about the folks at this conference, your paper will be on that program within the hour of their getting it.' She sent the proposal [describing the paper] in, and they immediately said please send us your paper, we’re very interested.”

At the conference, Cupery gave a presentation to the audience of scholars, professors and students, conveying the most significant findings of her research via bar graphs, charts and data.

“She did a beautiful job representing not just herself, the major and the department, but representing the whole college well,” Vanden Bosch said. “It’s a great thing to have someone from Calvin go out there from a major that’s two years old here at the college and deliver such an interesting paper for that conference.”

Cupery’s interests, passions, knowledge and expertise all seemed to intersect favorably for the project.

“I listen to [Turkish] pop music quite a lot,” Cupery said, “and since coming to the U.S., I hear American pop music in cars [and elsewhere], and so I was wondering what the differences between the two would be linguistically. It was an area where I had a very specific knowledge...so I thought it would be cool to analyze them linguistically.”

Cupery wanted to investigate the top-ten songs in Turkey and the U.S. because they represent music that many people listen to. She found cultural, grammatical and thematic differences between the hit pop songs in the two countries. While some of her findings were predictable, Cupery was surprised by some of the study’s results.

“Going in, I knew that Turkish pop songs were generally a little sadder, and American songs were more upbeat,” she said.  “What I found that really interested me was the verb tenses.”

In the Turkish pop songs, verbs were rather evenly divided between past, present and future tenses, Cupery said. The American songs, on the other hand, consistently had around 90 percent of verbs in the present tense.

The research paper has spurred Cupery to pursue further study and research. Next year, she plans to revolve her honors thesis around a similar topic, but with Spanish, Turkish and English songs. She also hopes to start learning Arabic next year. After graduation, she plans to pursue international work involving language translation in Turkish, English and Spanish. She will also be a Jubilee Fellow at Calvin and will be working at LaSalle Street Church in Chicago this summer for a ministry internship concerning cross-cultural communication in Spanish and worship.

In recognition of Cupery’s work with Vanden Bosch, she was awarded the Earhart Emerging Scholars Award through the Michigan Colleges Alliance (MCA). The award includes a $725 scholarship. MCF has also requested that Cupery present her research at the 2015 conference of the Michigan Academy of Sciences, Arts and Letters.