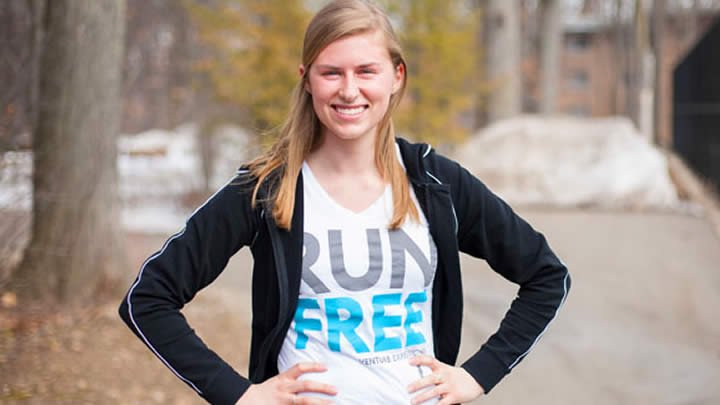 When the first-year Calvin student turned 19 this January, it dawned on her that 2014 was her last year to be a teenager. So she wanted to do something significant before crossing over into her twenties, and asked God for the opportunity.

“I asked God to break my heart,” Youngquist says of the decision, “and in many ways, God has broken my heart very specifically for people who are hurting due to human trafficking.”

So Youngquist set a goal to run 500 miles this year to increase awareness and raise financial support to combat human trafficking. With fundraising tools provided by Minnesota-based nonprofit Venture Expeditions, Youngquist is hoping to raise $1,900 (in honor of turning 19) for Run Free, an organization that helps victims of trafficking in Southeast Asia.

Balancing life as a first-year pre-med student, Youngquist admits that trying to find a consistent time to run each day hasn’t been easy—but she is often able to begin her day with a run around Calvin’s campus at 6 a.m. before hurrying off to class and activities.

Even this year’s extreme winter weather couldn’t stop Youngquist: “I think that’s the part of the physical sacrifice thing, especially with the weather,” she shares.

Since starting to run for the cause in January, Youngquist says, she has noticed a change in herself. “I can already tell that it’s changing the way that I talk, which is weird because you wouldn’t think running would change the way someone talks,” she admits. “But I realize that on the days that I run, I feel better about the rest of my day because that’s time I have away from people and time I have with God.”

Youngquist says she hopes to inspire others to find causes they are passionate about. “There are little things that we can do to change other people’s lives that we can focus on doing each day,” she says. “And it’s an everyday thing, not just looking at a whole year.”

Youngquist will be participating in Calvin’s annual 5k Spring Classic on April 26, 2014, to continue to add miles to her journey. To support her efforts, visit her fundraising site.