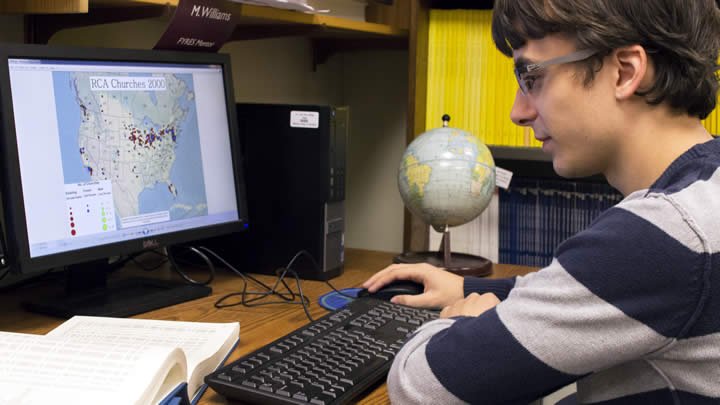 Matt Raybaud reviewing one of the maps he created for his project.

For a self-described data lover like junior Matt Raybaud, his summer job was the perfect fit.

“It started with an Interim trip to the Netherlands that Calvin offered last year,” Raybaud said. “That’s where I met the professor who I ended up working with (Henk Aay). We were both in the geography department, so we got along. Near the end of the trip, he told me about the position and the research. So I decided to apply.”

Over the course of 10 weeks Raybaud’s job was to take databases of information from other researchers, U.S. census records, Dutch provincial records and ship manifests and convert them into maps. Five hundred maps.

To begin, Raybaud converted a series of punch cards created by researcher Robert Swierenga, into Comma Separated Value files. Then he made Excel sheets from the CSV files. He then took information from the Excel sheets and plugged it into Calvin’s Geographic Information Systems (GIS) software, which, as he put it “is just a fancy term for cartography on the computer.”

“Matt is a very good GIS technician, a very good computer mapper,” said Aay, Calvin’s former Frederik Meijer chair in Dutch language and culture. “I needed someone who could do the computer mapping of all these data, and Matt just had the skills that I needed.”

Aay’s atlas project has been a multi-year endeavor so far, and he’s enlisted the help of several students from Calvin and from Hope College, where he is senior research fellow at the Van Raalte Institute.

But Raybaud gets the credit for converting the Swierenga punch cards into useable data for mapping.

The result is clear. Raybaud showed a selection of maps in his presentation on campus on Oct. 23, “GIS mapping for ‘The Atlas of Dutch American History and Culture.’” His maps show counties of origin, numbers of immigrants and their destinations, demographics, occupation, location of churches and more.

Aay said the maps are an important step forward in the atlas project.

“An atlas by its very nature begins to translate into a visual and more understandable form the scholarship of academics,” he said. “I have only praise for [Matt’s] output and for his ability to put his shoulder to those tasks.”

Aay also said that beyond its usefulness for the atlas project, the data Raybaud converted will pay dividends for other researchers.

“Most of this data is data from the 1980s [when Robert Swierenga collected it]. It had been gathering dust and no one was really using it,” Aay said. “By updating it into readable form for today’s software, we could make much more use of it, and now we are likely going to post all these databases for everyone to use in the future.

“I think what we’ve done here is not only prepared maps for the atlas and for other publications; it has made these databases retain their usefulness in perpetuity.”