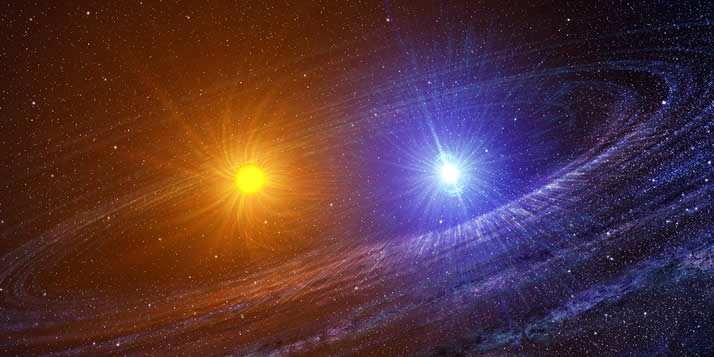 Last year, senior Dan Van Noord discovered a subdwarf B binary star, which is akin to winning the astronomy lottery. Out of more than 100 billion stars in our galaxy, it’s estimated that only one million of them are subdwarf B’s.

“It [Sub Dwarf B] consists of two stars: one is a very cool, small star, about a tenth the mass of our sun, and the other is about a quarter radius of our sun, but three or four times hotter and made of helium instead of hydrogen,” Van Noord said. “The system is extremely unusual. Subdwarf B’s are incredibly rare. And this one was extra special because it has a 95-minute orbital period. It takes 365 days for the Earth to go around the sun, these are two stars going around each other every 95 minutes.”

The particular subdwarf B found by Van Noord is the fastest known one in the universe. The astronomical find was announced at the Regional Binary Star Conference at Michigan State University last summer. Since then, Van Noord has been working with an international team of astronomers to study the properties of the subdwarf B.

“I’m currently leading the team to study it,” Van Noord said. “We’ve got data from the SOAR telescope in Chile, people from South Carolina, a team from Germany working on a model. We’re hoping to have a paper out by the end of the summer summarizing this discovery and its orbital properties.”

During his time at Calvin, Van Noord has developed an enhanced and accessible computer program that tracks binary stars from archived data at Calvin College.

“It [the program] reads in a set of images, say 50 weeks ago for the course of a night, maps all the stars and all of the images, and finds out how they changed over the course of the night,” Van Noord explained. “Most of the changes are because the atmosphere has changed, there’s different amounts of clouds, or light from the moon, or light pollution, or an airplane flying in front of our telescope. So by getting rid of those changes, we’re able to look for changes that happen in the stars themselves.”

The software has made the process considerably faster. About 3,000 times faster, in fact.

“Using the old [method] they found about 30 variable stars in 2008-2011,” he said. “In the first month of program testing I’ve found 30 additional ones, and since then we’ve well passed 200 now and are almost to 300 variable stars that we’ve discovered here.”

When designing the program, Van Noord wanted to make something accessible, user-friendly, fun and interesting to use. These are characteristics missing in many other binary star programs that Van Noord has seen from other universities.

“One of its big purposes is for students to get a chance to use it to look for their own variable stars,” he said. “It’s got a different experience. It’s not like you just feed a bunch of numbers into your computer, and your computer spits back a list. It’s capable of doing that, but that’s boring. It’s much more interesting to look at it, have it list the potential targets to look at, their light curve, how they change with time, and what [the program] thinks it is. That user experience is something I haven’t seen in anyone else’s software.”

The software has already been used extensively. Students use it in lab projects at Calvin in Astronomy 110 and 211. In 2013, Van Noord went on the Astronomy in the Southwest interim trip to New Mexico, where his software was used by students in local high schools and middle schools.

“He’s made a big contribution here at Calvin to the astronomy program,” said astronomy professor Steve Steenwyk. “His contribution was quite significant to improving the rate of discovery, and actually he carried out an awful lot of analysis just in making these light curves and everything else.”

Van Noord, a double major in computer science and physics with a minor in astronomy, has realized that the combination is the best of both worlds when it comes to researching, programming and developing astronomy software.

“I was kind of tied between the two [computer science and physics] when I was coming to Calvin,” Van Noord said. “But what I’ve learned along the way is that those two majors have a lot in common, where skills from the one really help in skills from the other. It’s a pretty rare skill set to focus on both of those things at once.”

“I think Dan will have a future, because that’s his interest and passion, using developing software, using computers, to be able to analyze and crunch the data related to astronomy,” Steenwyk said. “He brings the two skills together in one package: the interest and knowledge of astronomy, and the interest and ability to write software and do something with the data.”

Van Noord’s interest in astronomy and binary stars has deep roots. Back in high school, he competed in Science Olympiad, a science competition for high school students.

“The focus in astronomy [for Science Olympiad] was variable stars for three years I was in high school,” Van Noord said, “so I was learning about variable stars and liked it. And when I came to Calvin I didn’t actually know this, but they were researching variable stars here, so I got really excited, and when they said you can find your own variable star, that made me even more excited.”

By the end of the academic year, Van Noord hopes to launch a website that has his software available so that anyone in the world can upload data and process the results. 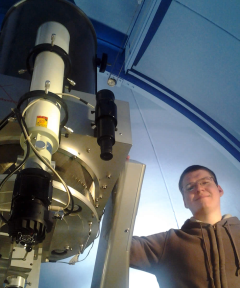