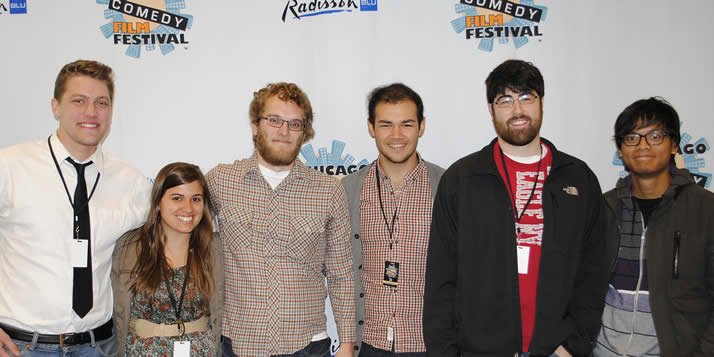 An animated film created by Calvin media production, music and graphic art students was honored at the Chicago Film Festival.

Last Friday, two Calvin students and four alums, all media production majors rendezvoused at a house outside of Chicago. The six hung out there, playing games and busting on “really bad TV,” said 2012 Calvin grad Dan Reinisch, who played host. The next day, the group drove downtown for the Chicago Comedy Film Festival, held Nov. 2–4 at DePaul University, where A Royal Pain, the film they made last year with four other Calvin media production alums, was an entry. To their unanimous surprise, A Royal Pain, won Best Student Film.

“Just to be accepted was plenty of excitement,” said senior Vivi Oliveira, who served as the film’s producer and was in Chicago for the win. “It was a fun moment. We were surprised, and at the same time, we were proud of it.”

One of the animators on A Royal Pain agreed: “Winning had a bigger impact than I thought,” said 2012 grad Ben Vanderput. “It made all the work more rewarding and really increased my desire and dedication to continue working with this group.”

To tell the story

A Royal Pain tells the animated story of a dragon trying to imprison a princess who keeps escaping him. The film grew from Taylor Wogoman and Daniel Reinisch’s desire to dabble in animation. Because Calvin has no animation class, the pair, in consultation with media production professor Brian Fuller, designed their own class, tapping student colleagues they wanted to work with on the project.

Wogoman led a team of animators: Vanderput, Steven Camp ’12 and senior Jeremy Li. Reinisch and co-director Josh Kappers ’12 brainstormed the plot of the film. Oliveira kept the schedule, booked the studio time and held all of the pieces together. “If they were working late, I brought them food,” she said.

Because the team didn’t possess all of the necessary skills to create their animated story —and because Fuller was eager to give his students a truly collaborative filmmaking experience—the team recruited students from other departments.  “We knew we needed a cute dragon, so we needed a good artist, and that’s where Liz came in,” Oliveira said of artist Elizabeth Steiner ’12, “and we needed a good soundtrack that didn’t cost a lot of money, and that’s where Logan came in,” she added of senior music student Logan Knoppers, who composed the film’s score.

The score came first, and Knoppers, a newly declared composition major, was out of his depth. “Add to that the fact that I tend to work very slowly, and it was quite a challenge for me to get out music that fit the film and that I found satisfying,” he said.

“Recording all 36 musicians took days, never mind choosing the best sounding takes, and then editing them all together,” Reinisch said. “Logan and I spent so many hours together, in the studio and in the editing suites, working to perfect everything. …  I am so proud to have been a part of it. I love the way it works with the film, building our characters and telling the story.”

Steiner was responsible for the overall look of A Royal Pain. (She also created the film’s poster.) “We dropped every single character in the world and every prop on Liz, and she developed it,” Oliveira said.

Steiner said she enjoyed developing the world of the film and watching the characters she drew come to life: “I loved whenever Taylor, our animation wizard, would show us new clips he had finished animating when we came to class,” she said. “It was like Christmas. We’d all stuff ourselves into his tiny production room and "ooh" and "ah" at how everything was coming together.”

Several members of the team remember the production of film as arduous, but fun: “I remember spending 24 hours every weekend animating,” Wogoman recalled. “It was hard to give up the entire weekend but fun to have everyone working together to create a film.”

And Camp remembered: “There were weekends ... in the basement of the DeVos (when we were) screaming at animations and each other as we all came closer to reenacting the Donner party. But in the end our producer, Vivi, bought us pizza, and we all loved each other.”

The honor for A Royal Pain is the 36th award for a Calvin student film in the last four years. A Royal Pain is also one of five films for which Calvin music students wrote the scores last year. The partnership was so successful that the media production, music and graphic art departments are continuing it on three films this fall and five during spring semester.

“I don’t think that people realize when they’re in a 100-level class that they’re networking and making friendships that may last them their entire professional lives,” said Fuller. “That, to me, is the payoff of the community and hospitality emphasis of the media production program. ’Cause, frankly, Christian community ought to be the secret weapon of Calvin’s digital filmmakers.”

Collaboration is what the student filmmakers remember most fondly about making A Royal Pain. Said Kappers:“The thing I'm proudest about was how our whole crew came together, stuck with the project and maintained enthusiasm for the film from beginning to end.”

Reinisch feels the same way: “These people are the best friends I made at Calvin. We all loved working together, and even when there wasn't a project going on, we love being together,” he said. 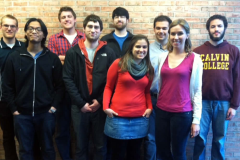 The students behind A Royal Pain 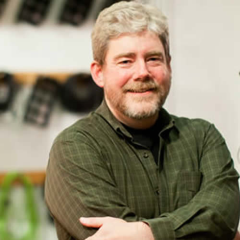 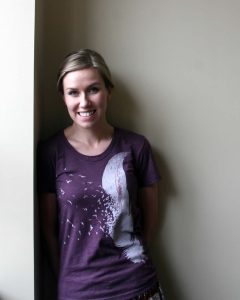